Hiking at La Blanche: a panorama on the massif of the Ecrins / Pelvoux to take the breath 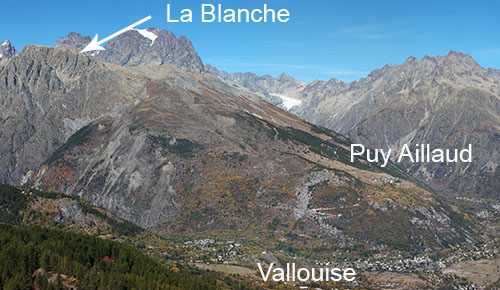 A 360 ° panoramic view will reward you for the effort you have made. Towards the west / north-west and in the foreground the southern slope of Pelvoux (3932m), the Eastern Ailefroide, the Peak Without Name, the Coup de Saber, the Sialouze glacier etc ...
Towards the east, in the distance, the Queyras dominated by the Italian Viso but also the Mercantour massif overlooked by the Argentera.
A pair of binoculars will allow you to see, beyond the Montgenèvre pass, the Sestriere station and its prominent central building, organizer of the 2006 Olympic Winter Games, as well as Serre Chevalier and the Cucumelle sector, which always reminds one of the beautiful smile of Emilie ... Closer, still east of the summit, the valley of Vallouise with its stations of Pelvoux / Vallouise and Puy Saint Vincent are offered to you. The Briançonnais and the old town of Briançon fortified by Vauban is just behind the massif of Montbrison towards the north-east. 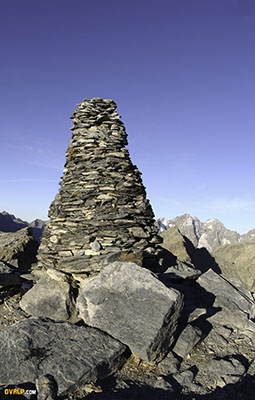 La Blanche served as a point of geographic triangulation during the various campaigns for the establishment of topographical maps, in particular for military purposes in the 18th, 19th and early 20th centuries.

The Massif des Ecrins was long known as the Pelvoux massif because it appears in the foreground. One can imagine, however, the highest summit of the massif, the bar of the Ecrins (4101 m) in the background of the Pelvoux (not to say hidden), from the summit of the Blanche. The Barre des Ecrins which was before the attachment of Savoy to France, in 1860, the highest French summit.

Long discussions, debates and controversies took place to know who was the first mountaineer to have trodden the top of the Barre des Ecrins. Moore, Walker and Whymper, accompanied by the Chamoniards guides Michel Croz and Swiss Christian Almer (and therefore no local) seem to be the first conquerors (at least of recent epochs, not counting the medieval warm period!). In any case, according to the historians Janin-Thivos and Tailland ("Des ascensions oubliées?") By Éditions du Fournel.
Local amateur amateur historians undertook to demonstrate that the first were carried out before the official discoverers (Wymper etc ...) by military topographers accompanied by people (well here ;-) of the local valleys. Too sure of them, with a propensity "confirmation bias" for some observers, their theses and studies are still available here in french http://www.vallouise.info/nouvelles/2015/0816-a.htm
A synthesis of these debates can be read at the Dauphinoise library here in french http://bibliotheque-dauphinoise.blogspot.fr/2016/12/la-premiere-ascension-de-la-barre-des.html

If the topic of geodesy interests you, do not hesitate to browse the page of this site relating to Corsica seen from the continent and to the works of Paul Helbronner.

The total elevation is just under 1,400 meters. It is therefore not a simple stroll or walk!

The classic climb is made from the southern slope in the alpine pastures above the so-called Pimouget place (route of the crests in red color on the video below). From 2500 meters above sea level, the grass leaves room for pebbles. The route, in summer and in good weather, is fairly easy to follow thanks to the cairns and the trail. By counting an average of 300 meters of climb per hour, it takes 4 to 5 hours from Puy Aillaud and can be a little less descent, except bulbs or tiredness!
A first small variant consists, at the beginning, to pass to the level of the take off of the paragliders, for the spectacle and the colors of the sails.
It is possible to stop, on the ascent or descent, to the lake of Puy Aillaud, on the way, without making a big detour.
A short handrail (wire rope screwed into the rock) a few tens of meters from the top will facilitate the steep passage to this place. A monumental cairn more than 2.5 meters high dresses the top of the White.

Some will choose a more direct route passing through the crests: Esplaras cross then Chastellet before joining the classic route (orange peaks path on the video below).

A truly different option (the route of the crests in violet color on the video below) consists in going towards the slopes of the ski resort of Pelvoux towards the west then to join the Belvedere of the three refuges (piercing view or indispensable binoculars! ). You then cross the slopes under the Rouya (2753m) to reach the lake of Puy Aillaud and join the summit by the classic way.
A small video below details these itineraries but do not forget to be always cautious and foresight (weather, risk of avalanche, equipment etc ....) and do not hesitate to call a professional to accompany you . 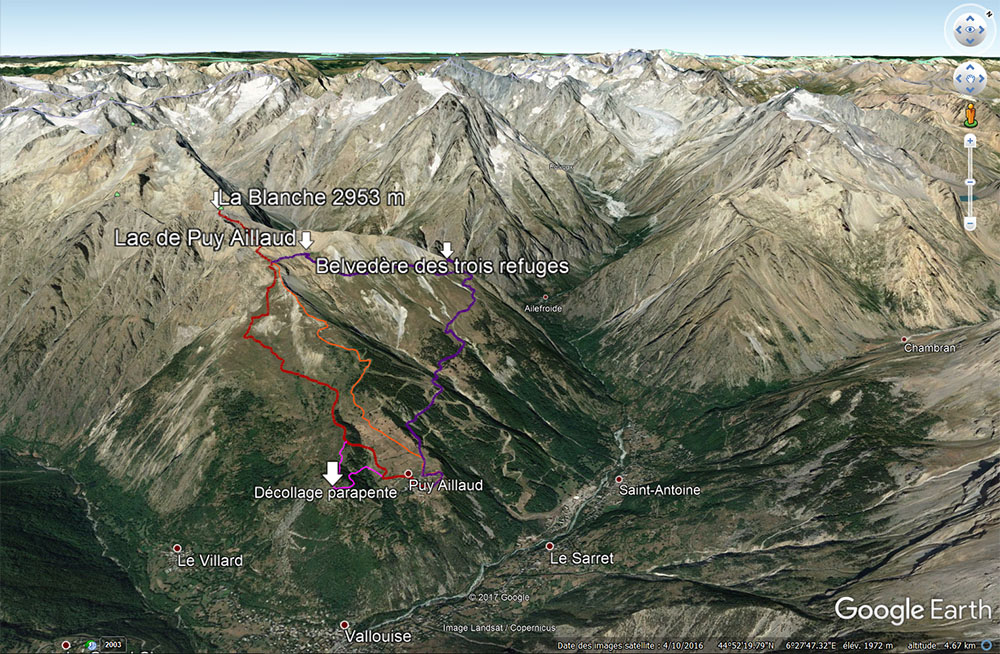 Bivouac at the top of the Blanche

Bivouac under the summit (small flat approximately 30 meters under the summit cairn) will make the walk in two days. Watch out for the cold that can be biting even in the middle of summer at almost 3000 meters above sea level and spoil you the pleasure of an outdoor night if you are not equipped enough. In case of doubt do not hesitate to go to the shops of sports and mountain of the valley in Vallouise, Puy Saint Vincent, Pelvoux or even the Argentière or Briançon who will propose you adapted and last equipment!
It is possible to walk the small rocky plateau beneath the summit towards the south west, over a few tens or hundreds of meters, to overhang the valley of Entre Les Aigues at the end of which is the refuge of the Bans or the hut of Jas the Cross.

From the Blanche, the sunset, the lights of the valley bottom that light up and the night just under the stars will leave you a memorable as memorable as the day that rises on the massif of the Ecrins.

Video of trips to La Blanche

The summit of the White is on the edge of the Parc des Ecrins, the boundary is located at the summit on the precipice towards the village of Ailefroide and the valley of Sélé. You can hopefully see marmots, chamois, eagles, vultures, maybe even a bearded vulture or, more rarely, ibexes in the dizzy gullies above the wave. The geology with faults in the rocks below the summit is exceptional. Small plants arrive incredibly to grow between these stones. Enjoy passing, before or after the hike, at the Maison du Parc in Vallouise! 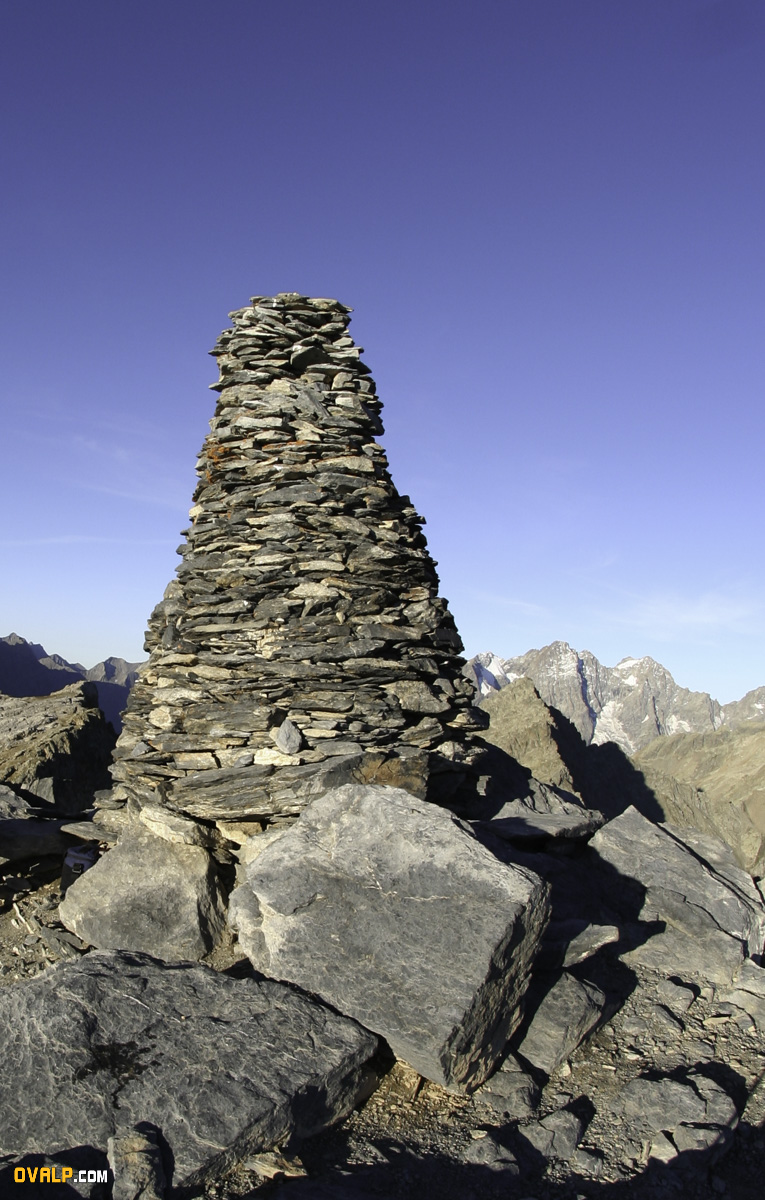 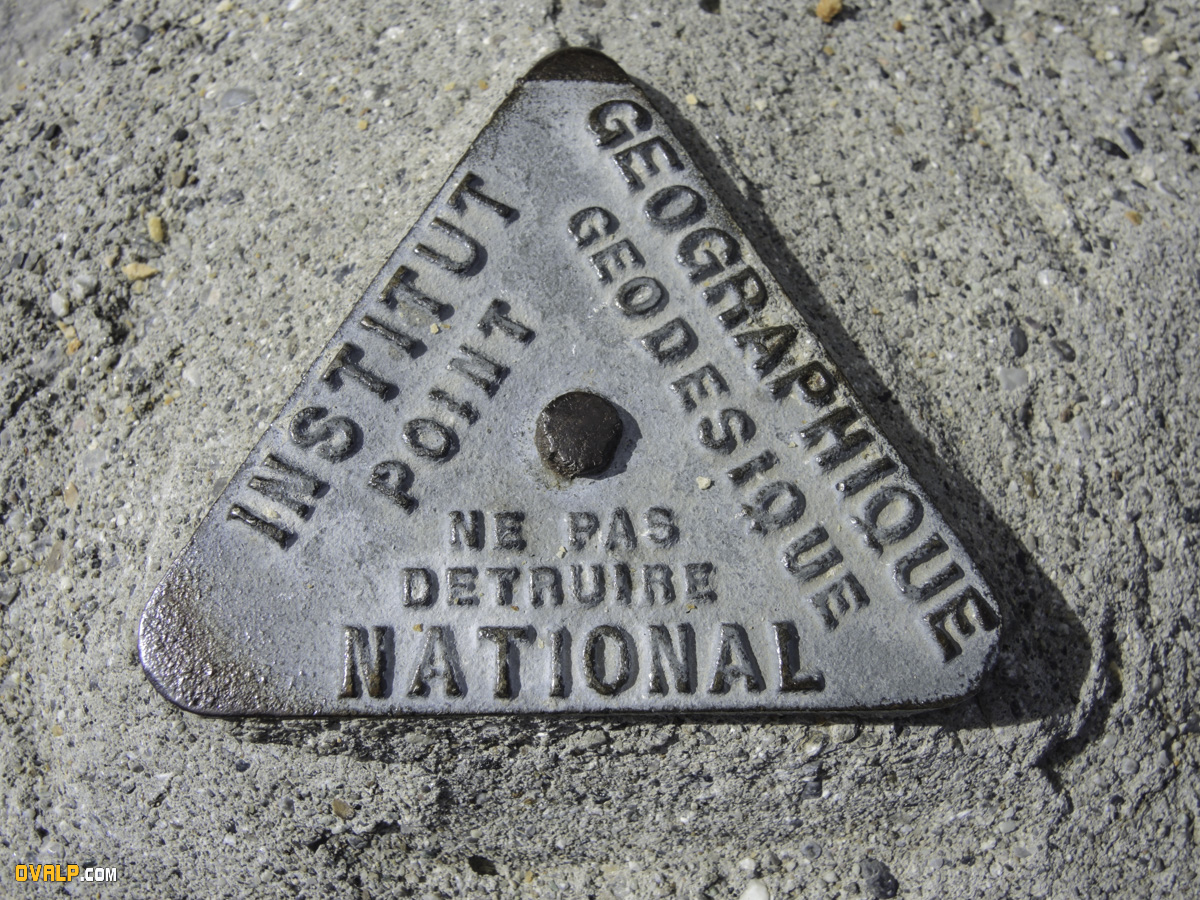 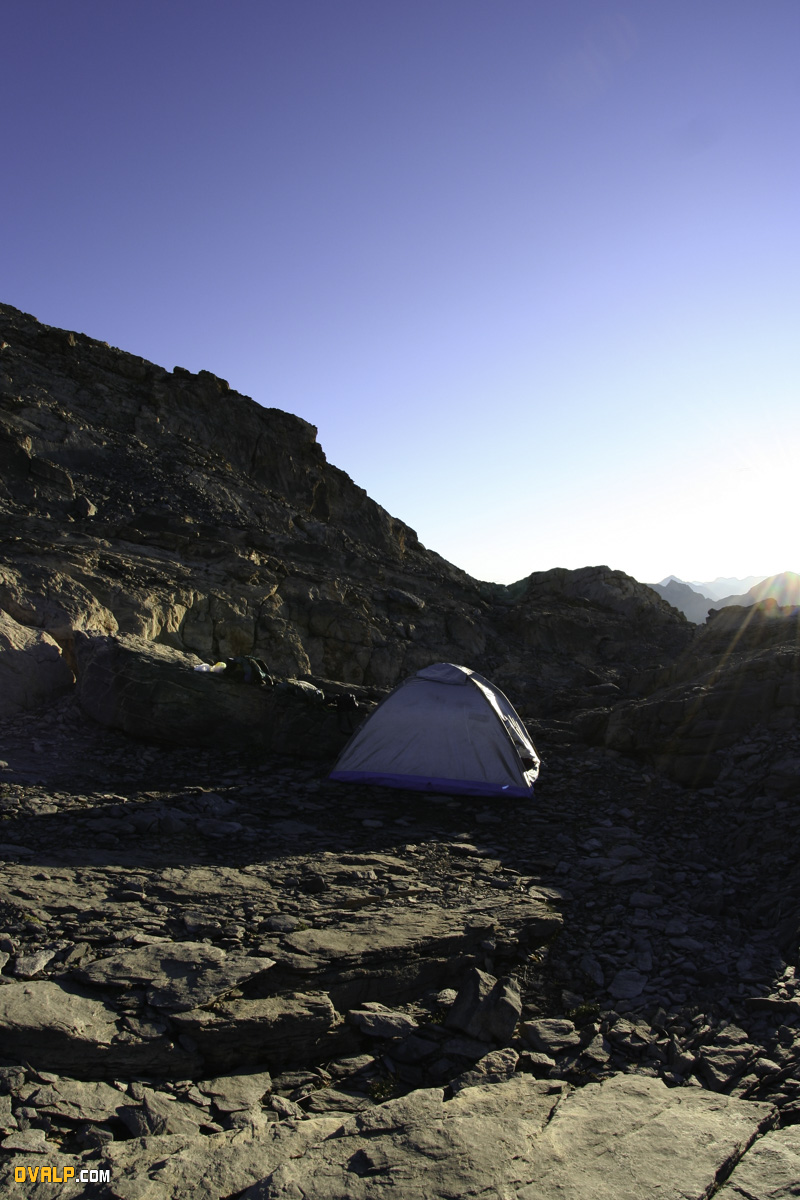 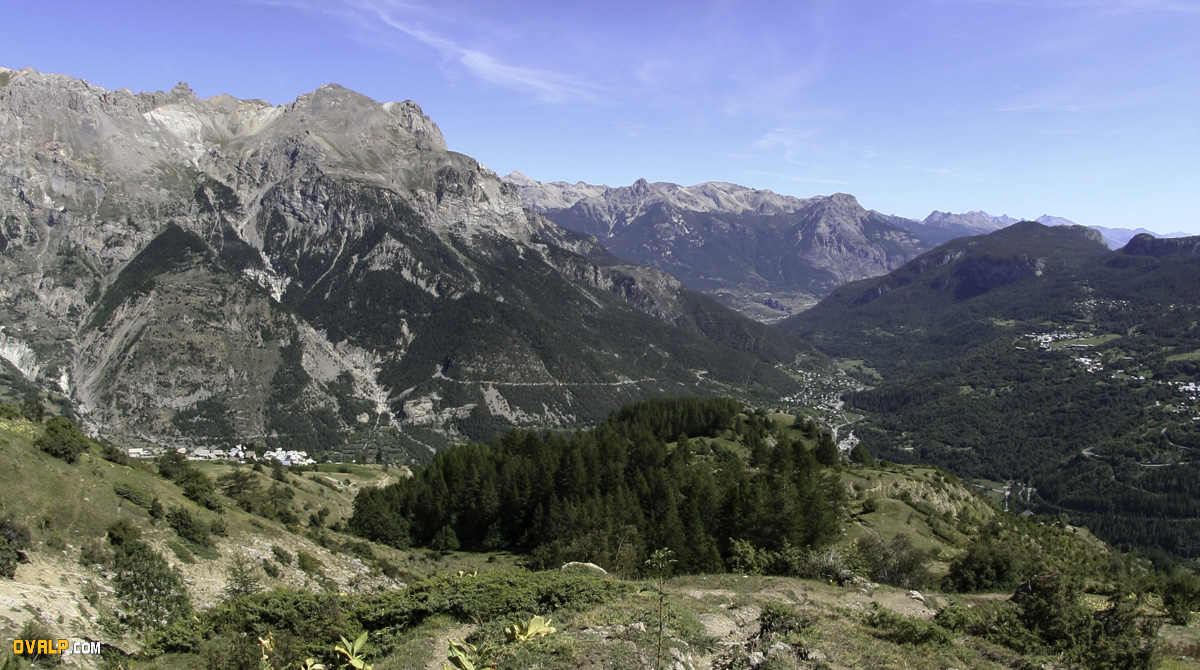 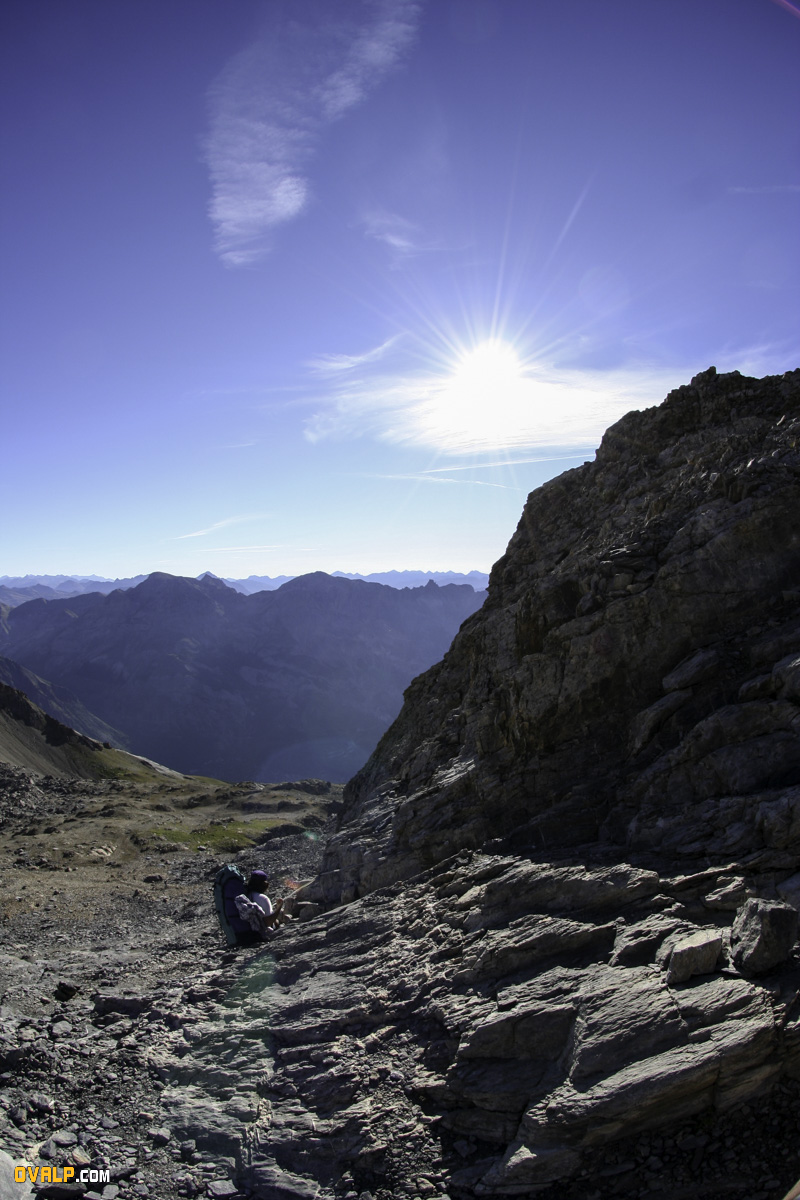 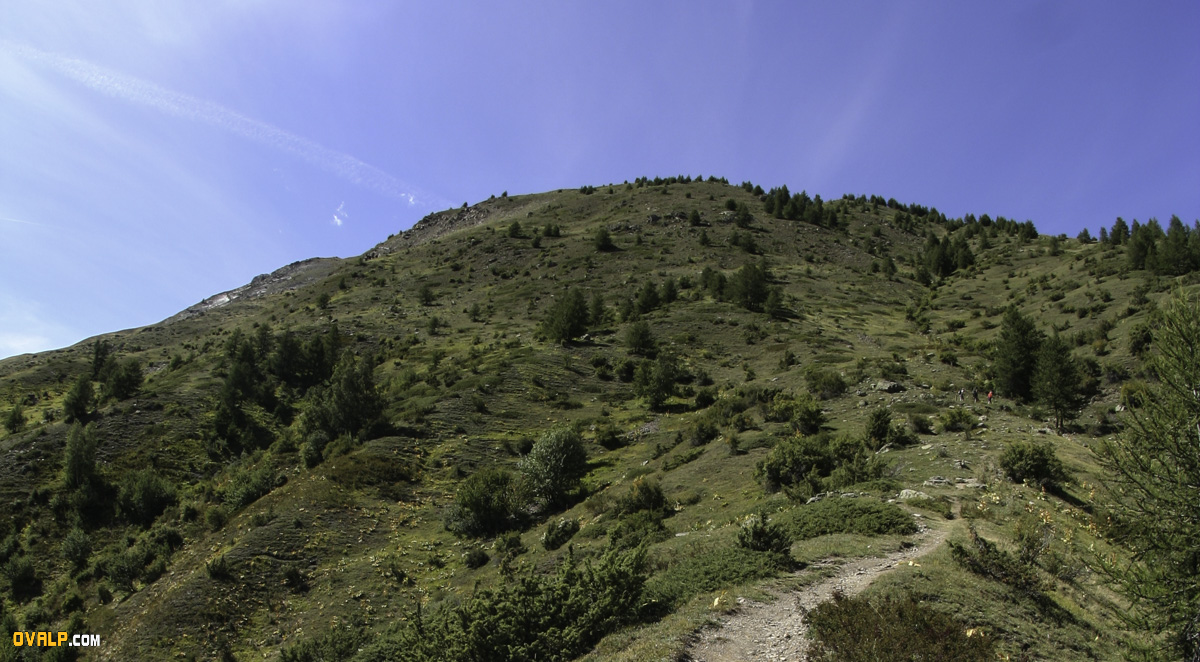 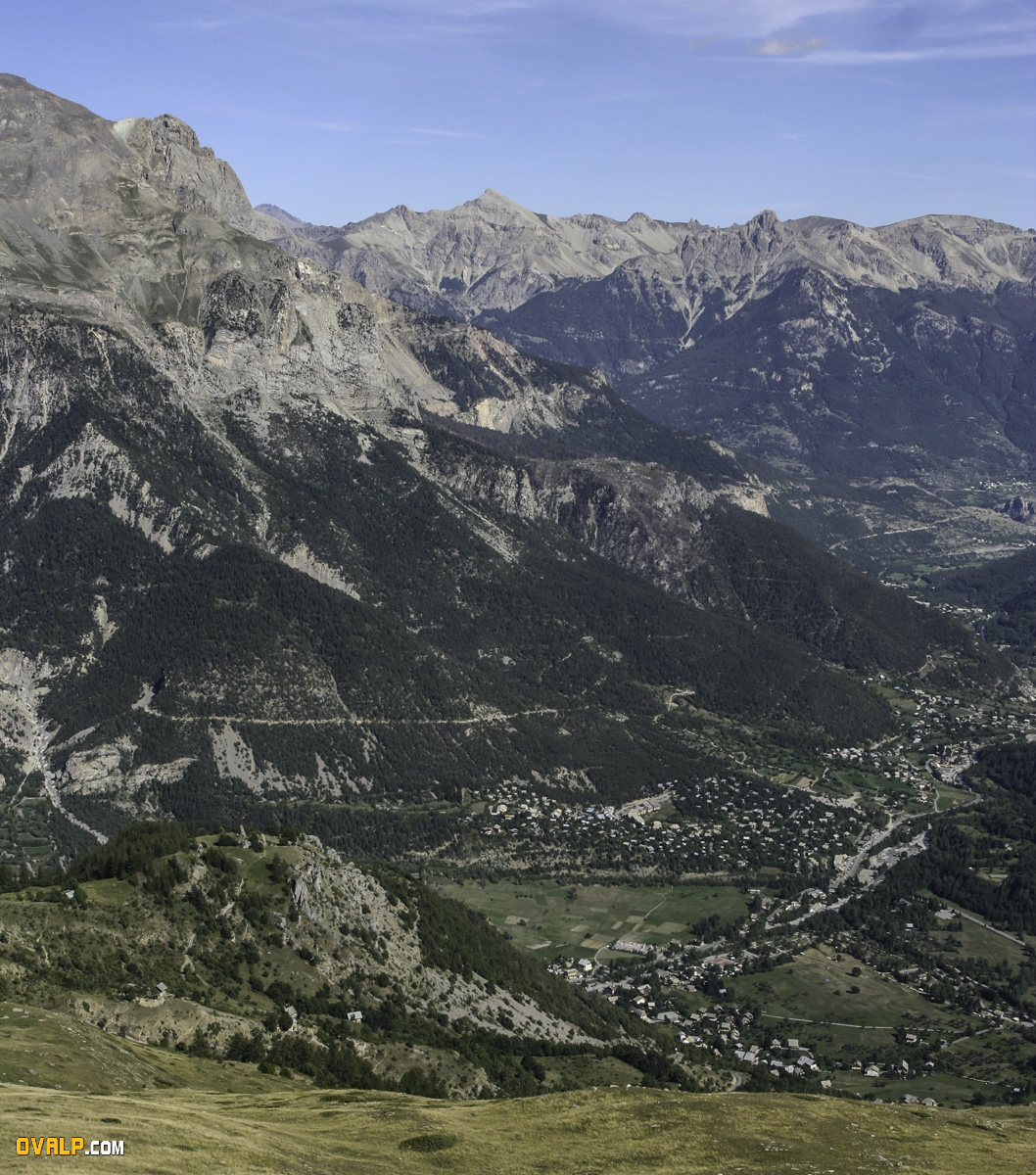 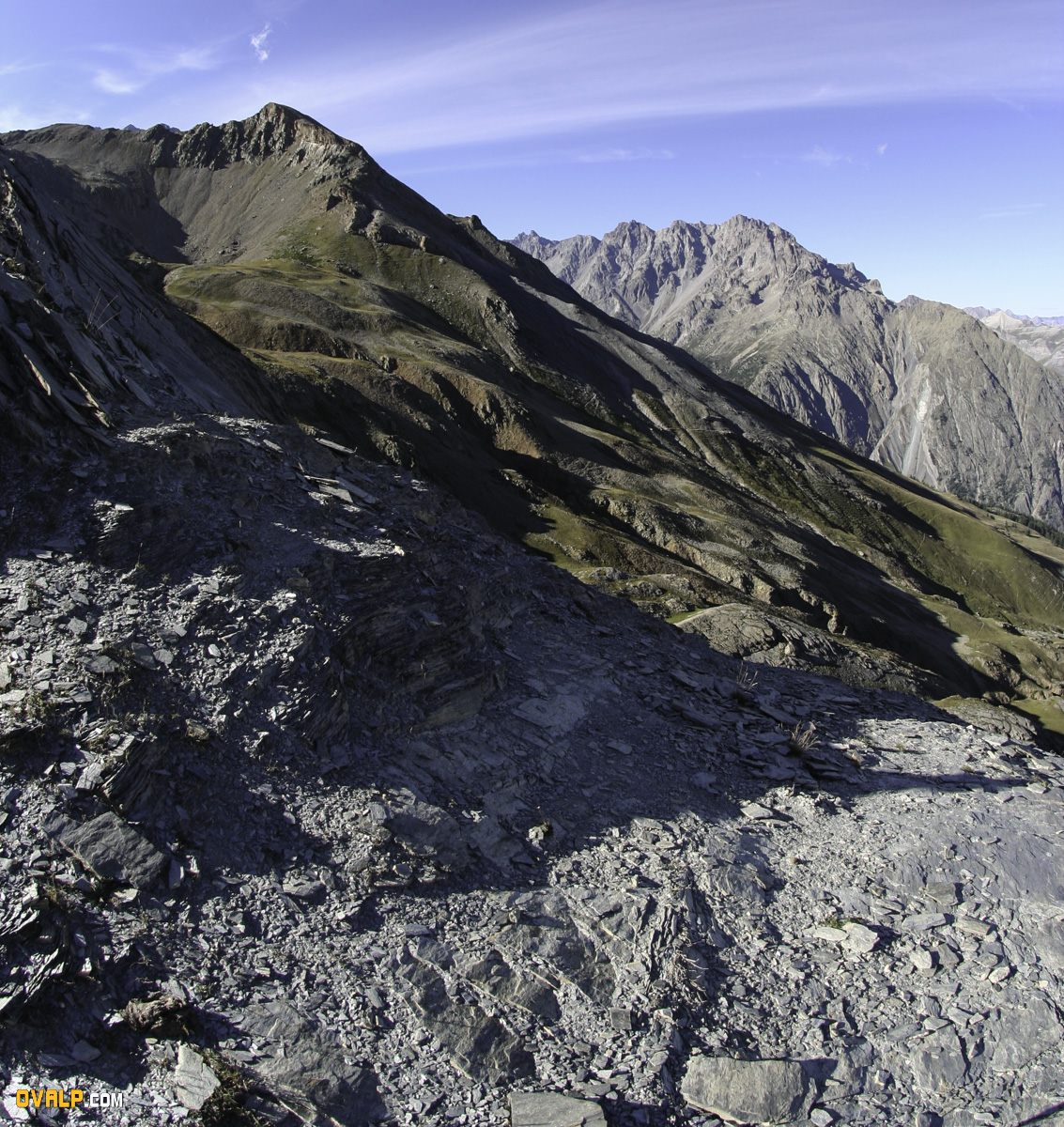 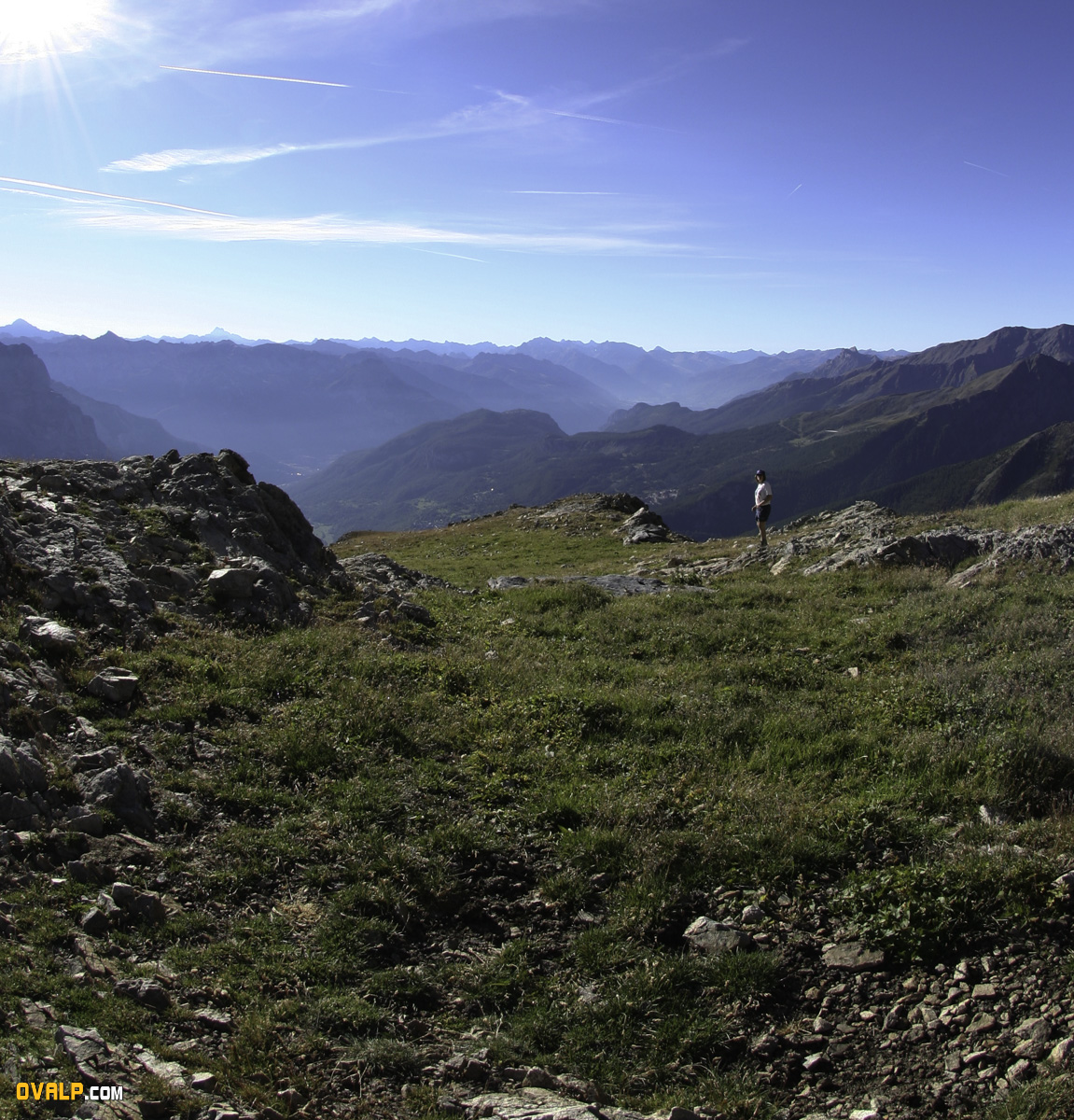 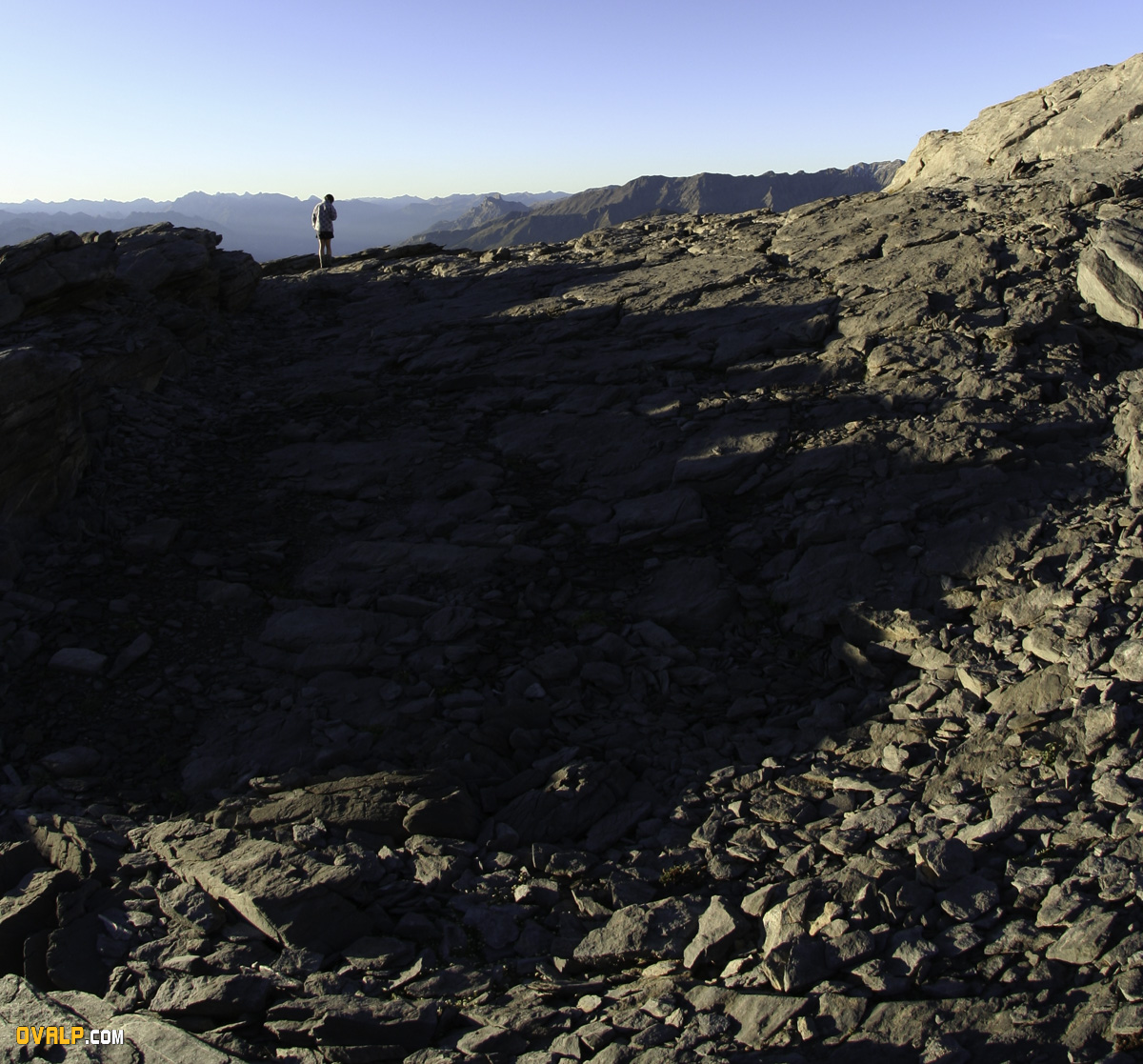 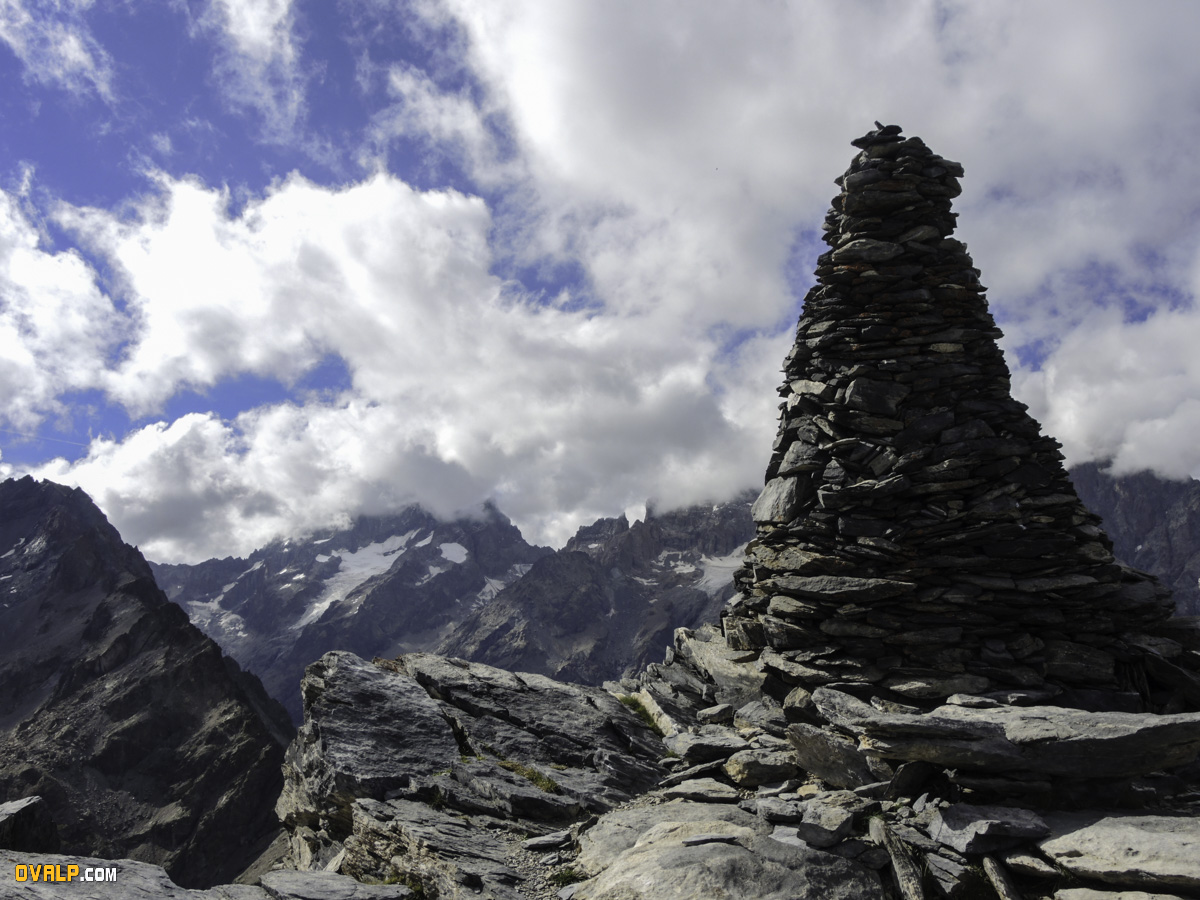 The white is also a great idea to go out skiing in winter, it does not bear his name for nothing even if global warming impacts here also winter temperatures. Skiers often leave the top of the resort of Pelvoux following the ridge to the cross of Chastellet and then directly to the summit (700 meters of uneven). It is even possible to continue towards the valley of Claphouse then the hamlet of Ailefroide via a rope of recall visible on the video of the bivouac to the Blanche above.
As always be very careful about avalanche risk prevention (bulletin, detection equipment etc ...) and do not hesitate to call on a mountain guide

In the downhill stop in one of the two restaurants, country bistro (Ferme Auberge de Puy Aillaud 04.92.23.37.32 or Rhododendrons 04.92.23.30.14) to finish enjoying the moment you have just lived in front of a drink or a good little dish.

Some pictures of the ski tour of the summit of La Blanche (Vallouise)conducted by our friend Jean Christophe Leroy, talented photographer based in Clermont Ferrand, in love and used to the Vallouise. If you are looking for accommodation in the capital of Auvergne, your bed and breakfast is worth a stop.