Corsica seen from the continent

A few days a year it is possible to see the Corsica from the Côte d'Azur (Nice, Eze, Monaco, Menton, Grasse, Gourdon, Vence, about 180 kilometers). This phenomenon, rare at dawn, is exceptional the day.

Menu Corsica seen from the continent :

Corsica seen from the continent, mirage or reality

We made our first observations in the early 1990s from the paragliding take-off area under Mount Agel near Monaco. From thread to needle and over the years we made photographs in Fuji Velvia and Provia at the beginning, then digital. We then looked at the different aspects of this subject (history, physics, etc.). Images have long been visible on ww.nice-image.com, and then moved to www.ovalp.com.

"Everywhere, mountains around me, and, in front of me, the sea, the sea with an almost indistinct spot: Corsica, or rather the shadow of Corsica." Guy de Maupassant

A few days a year it is possible to see the Corsica from the Côte d'Azur (Nice, Eze, Monaco, Menton, Grasse, Gourdon, Vence, about 180 kilometers). This phenomenon, rare at dawn, is exceptional the day. Many people believe in a mirage, in the common acceptance of seeing something unreal, non-existent. Light refraction, a well-known physical phenomenon, deflects light rays and a little favors, some would say, the view of Corsica from the continent. The roundness of the globe and the weather limit and influence these observations much more than the effects of light refraction. 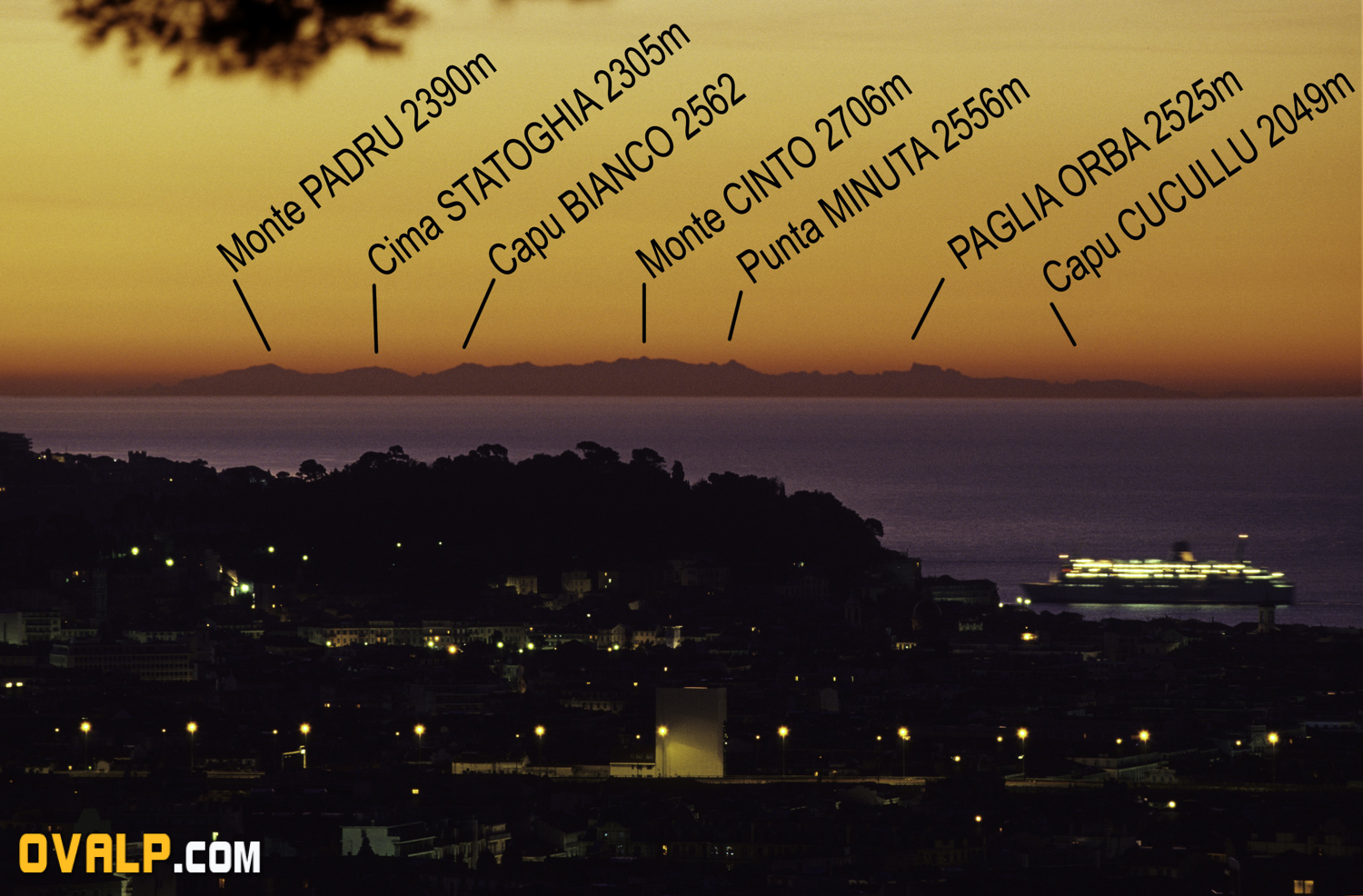 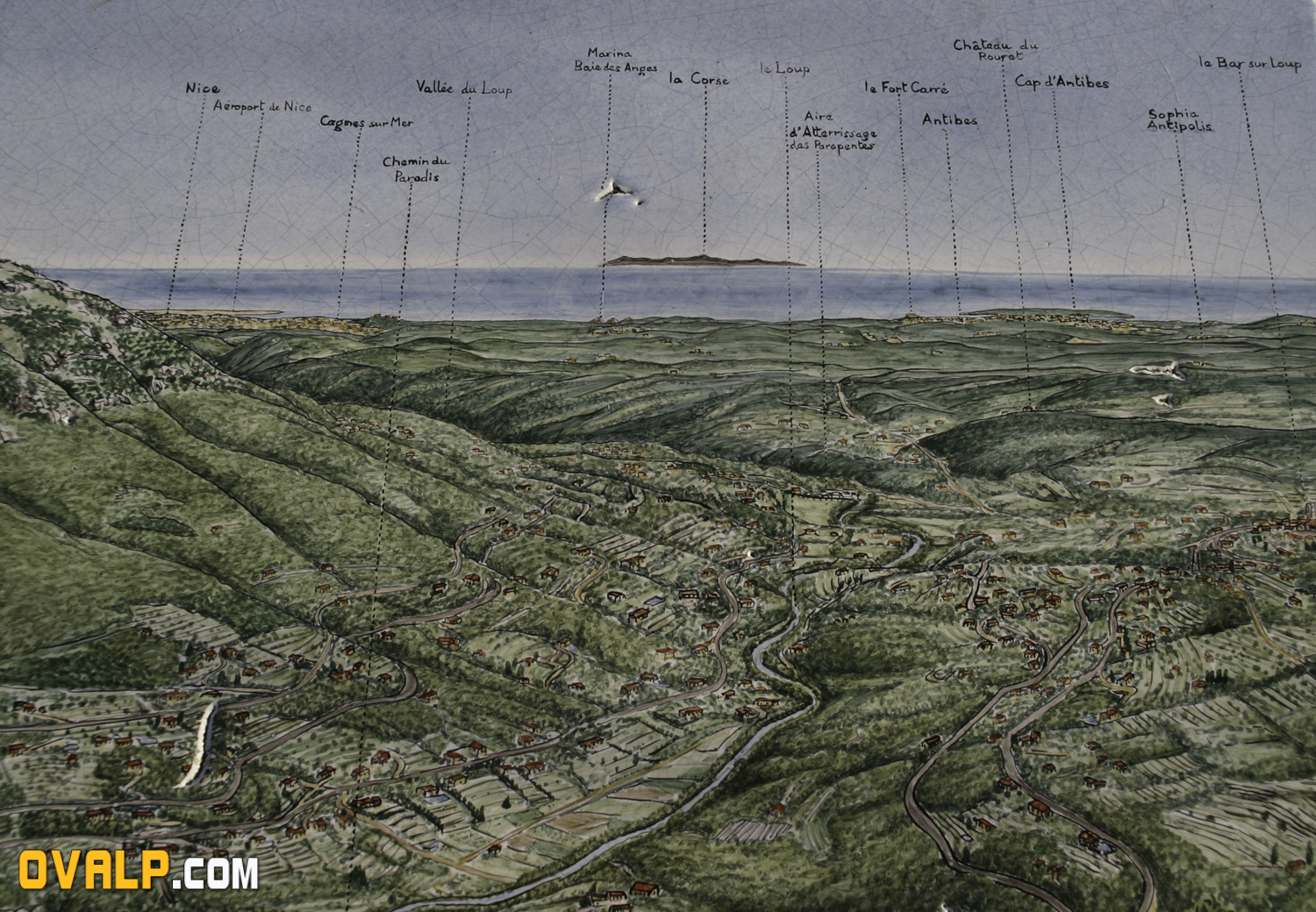 Corsica seen from the continent: the weather conditions required

The weather and air conditions of Corsica appear relatively easy to identify. Visibility depends mainly on the amount of solid or liquid particles suspended in the atmosphere. The larger the number of particles and the lower the visibility.

Aerology, which focuses on small-scale weather phenomena, tells us that it is the stability or instability of the air mass that traps these particles or, on the contrary, liberates them. A stable air mass prevents vertical movement. An inversion of temperature (temperature increasing with altitude instead of lowering) thus blocks all the particles, this has the effect of diffusing the light coming from Corsica and thus prevent us from seeing it. These particles (aerosols) come from smoke (fire, various and various pollutions), pollen suspended in the air, particles of salt and especially steam (water in the gaseous state). Sea and air temperatures should be close enough to minimize evaporation.

To have a chance to see the Corsica of the continent, it is necessary that these aerosols are as few as possible. The humidity of the air mass is probably the most penalizing factor. This inversion in low layer often prevents to see the coast Corsica, we only distinguish the summits. 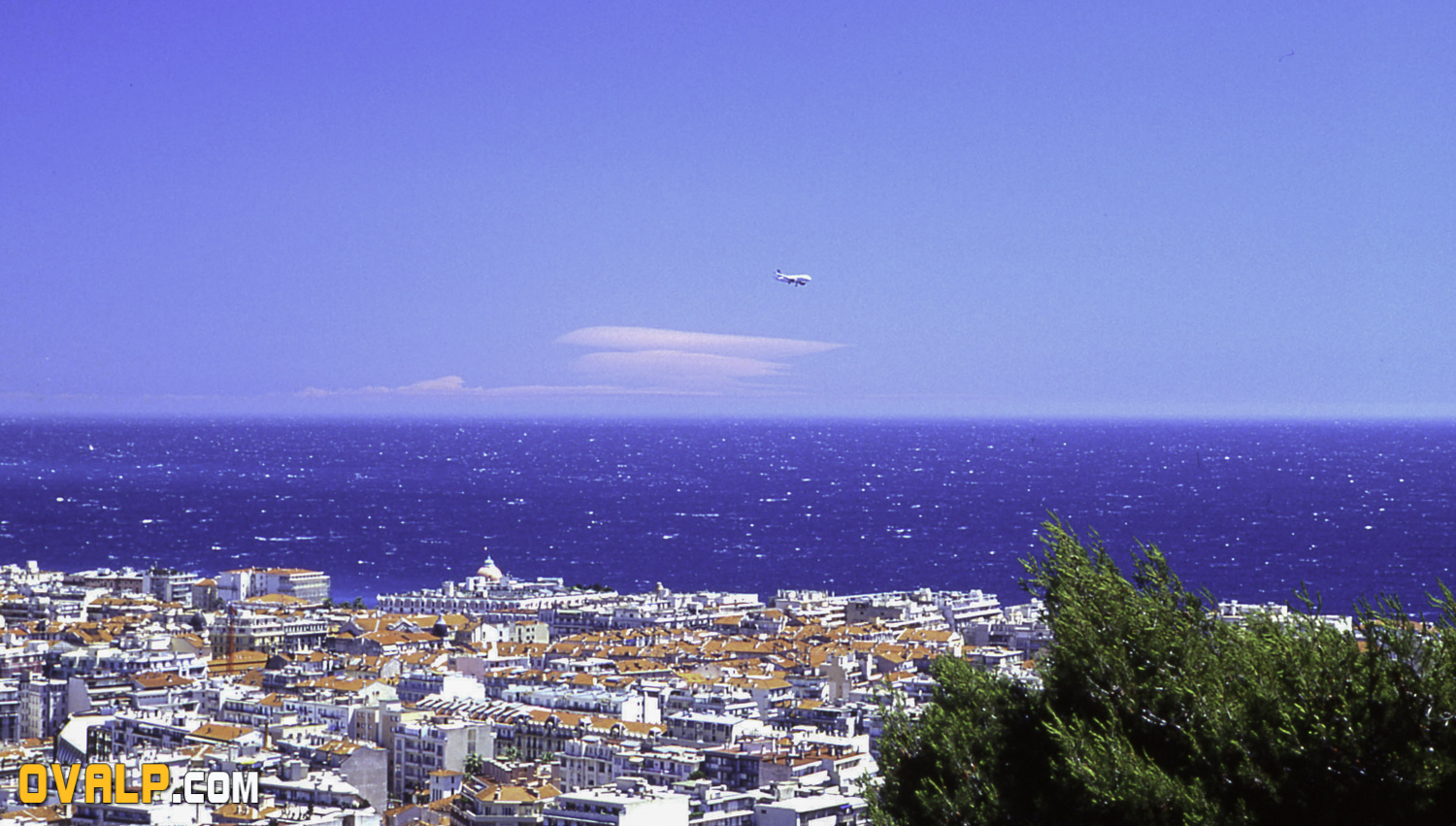 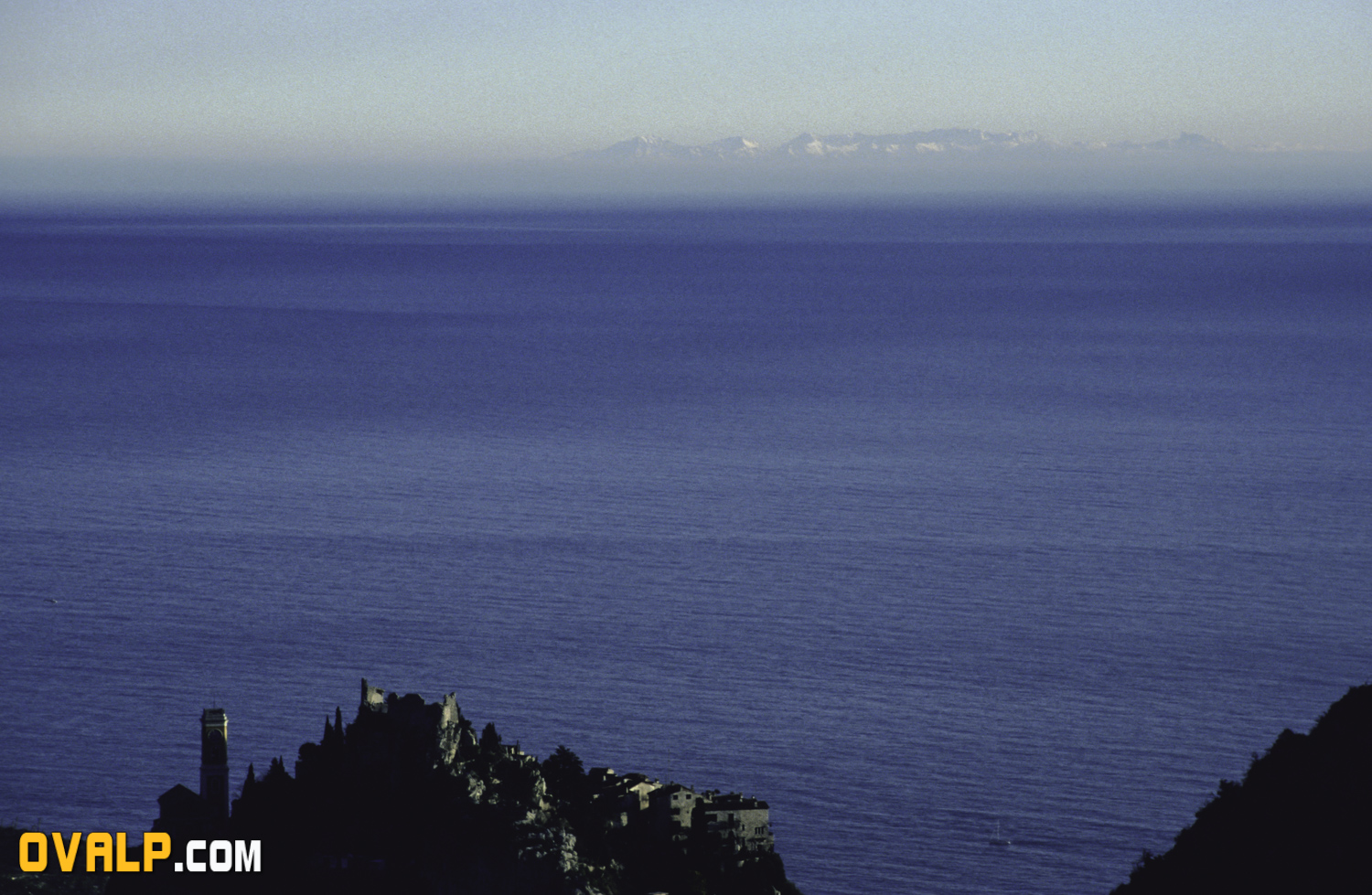 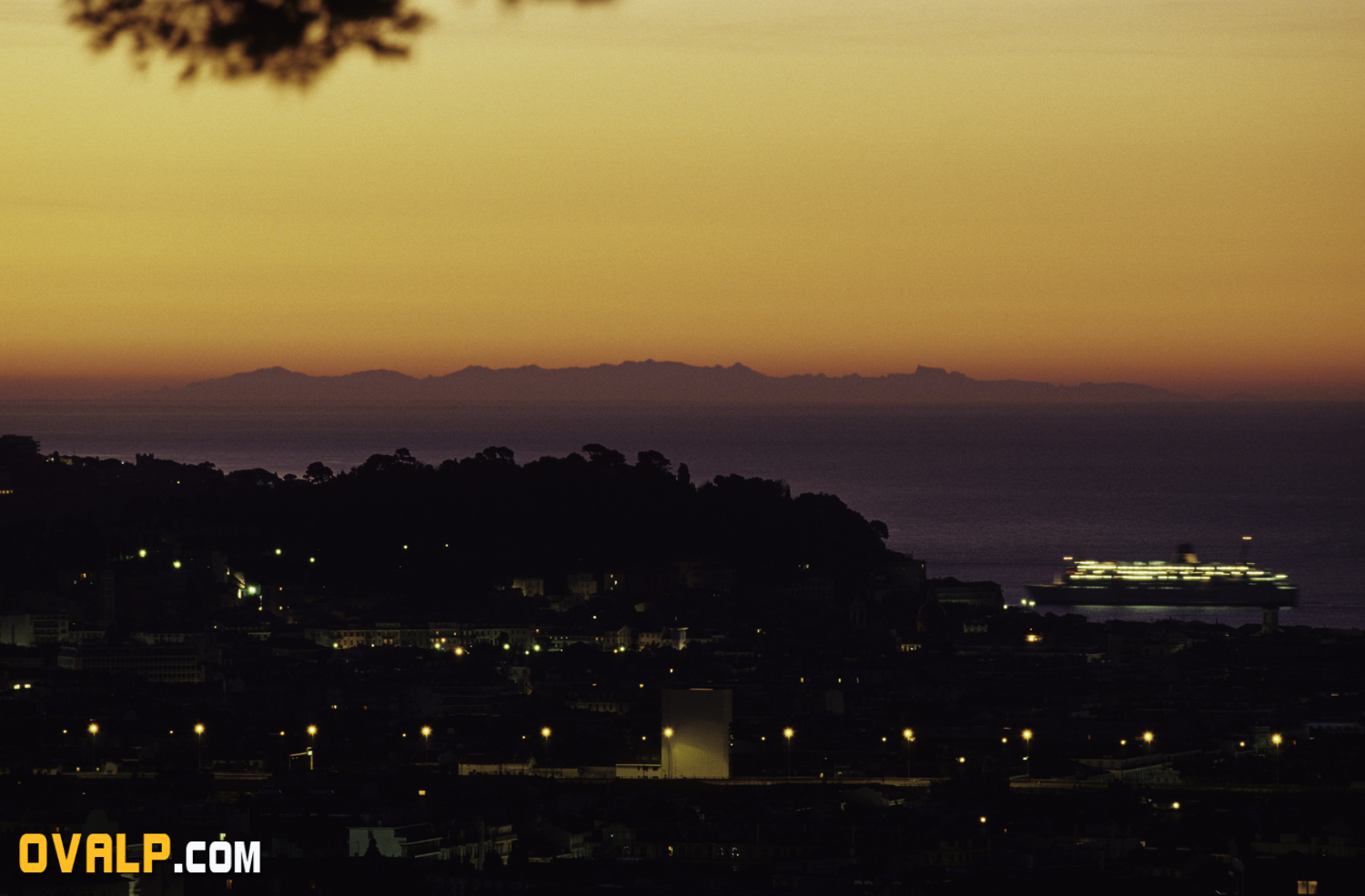 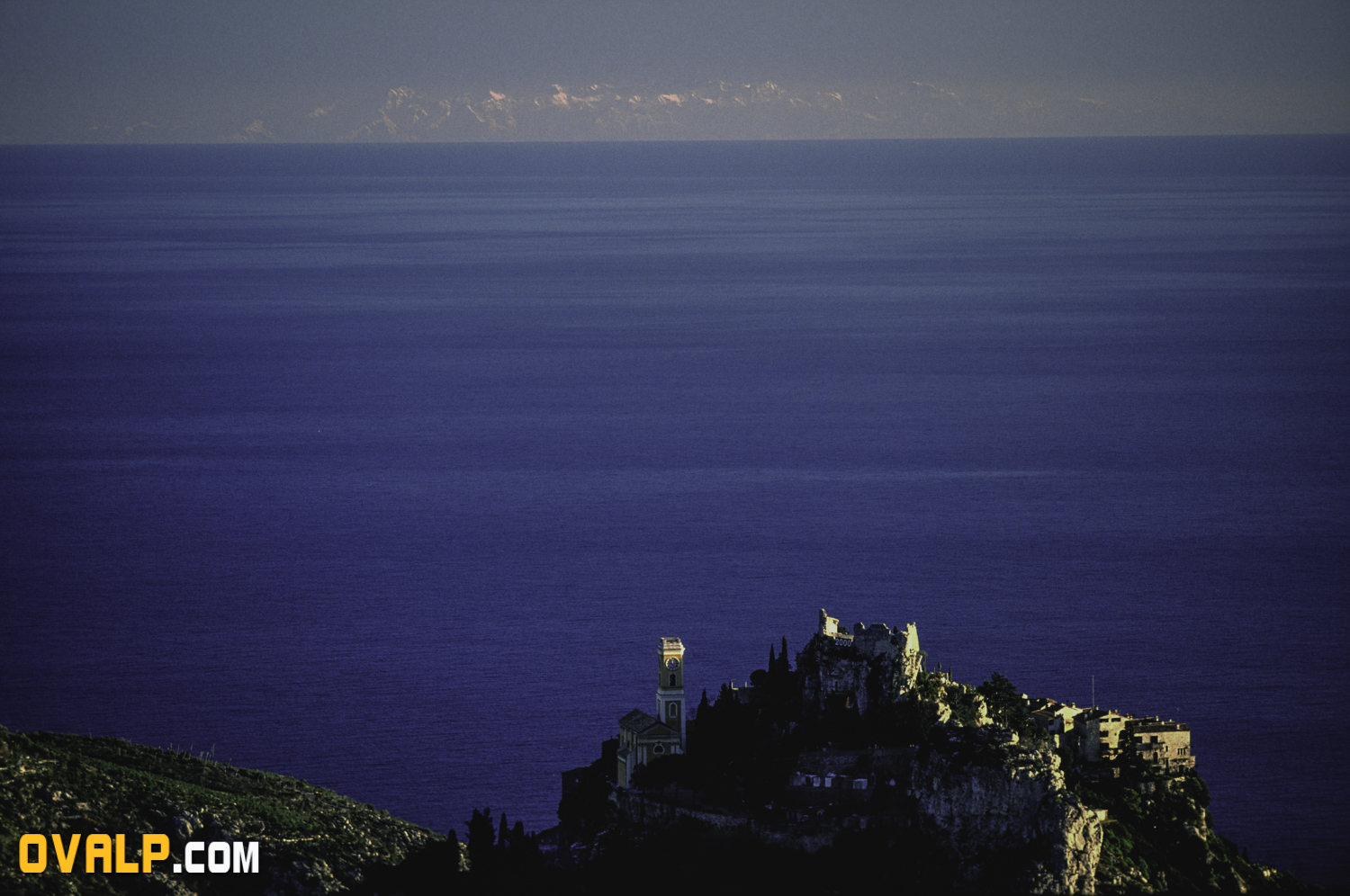 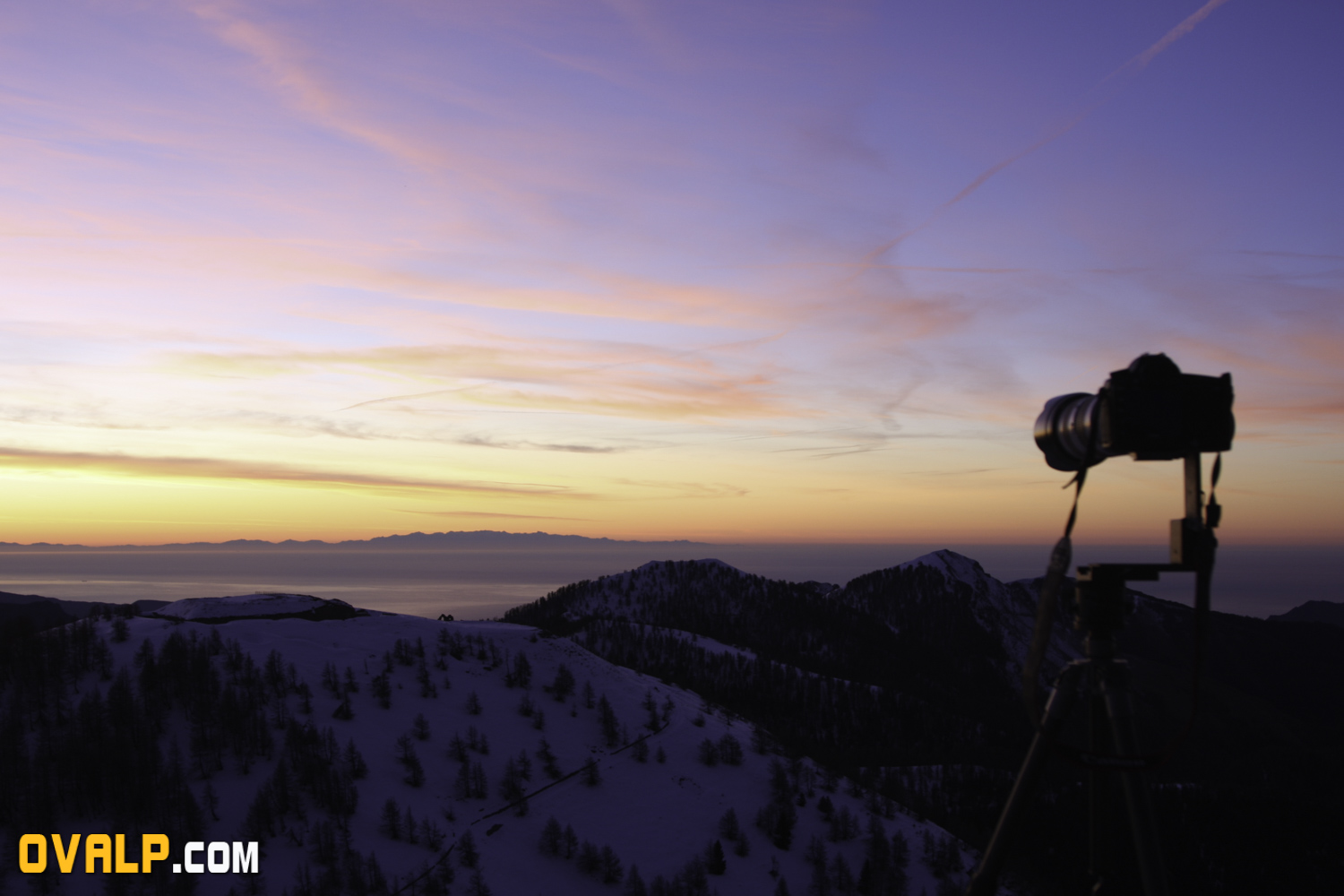 At the meteorological level, air science at the level of a region or a country, it can be noted that a dry air flow promotes good visibility. The air coming from the south, charged with water vapor by the Mediterranean prevents good visibility. On the contrary, the cold, dry air of the north is favorable. This north flow is called the Mistral in the valley of the Rhone and in Provence. The anticyclone of the Azores is at the origin of this wind. It is often associated with a depression on the Gulf of Genoa. The position of this depression will determine the clarity of the air between Corsica and continent. To simplify when this depression is located to the south of Cap Corse, it brings back from the East wind loaded with moisture on the Côte d'Azur. So that it also drives a flow of North it is necessary that its center is positioned approximately on the Italian boot and to the north of the latitude of Cape Corsica. When vacuum is absent, which is unusual, visibility is often excellent.

The roundness of the globe severely limits the observation of Corsica from the continent. Most of the photos on this web page only show a portion of about fifty kilometers of the Island of Beauty. The rest is under the horizon or under the low layer mists. A simplified formula makes it possible to calculate the altitude of what is observed (h2) as a function of its altitude (h1) and the distance (D) between the observation point and the point observed.

For example: at 150m altitude and 180 km distance you can only see what is at 1425 meters or above.
The rays of light are systematically deviated from the surface of the earth. This parameter influences favorably because the light rays follow a certain proportion of the earth's curvature. This phenomenon is called refraction.

Click on the pictures below to access panoramic high-definition photographs of Corsica seen from the continent. These images were produced by assembling several photographs and can allow large format prints. The photos below are panoramic high definition of Corsica seen from the continent from the Mercantour massif (Authion area, Turini Pass, Alpes Maritimes).

This photo (dawn before sunrise) represents Corsica (face North West) in its entirety without the roundness of the globe limiting observation! The island of beauty is visible from the beaches to the summits.

Photos HD of Corsica from the heights of Nice

Corsica seen from the mainland, historical of this observation: Paul Helbronner great discoverer!

Paul Helbronner (1871-1938) took a close interest in the position of Corsica in the Mediterranean basin. A scientist by training (polytechnic school), he spent much of his life doing a work in 9 large volumes: "The detailed geometrical description of the French Alps".

This work consisted in defining the precise position of the summits of the French Alps in relation to each other, by triangulation. Believing to arrive at the end of his project he saw the Corsican summits as he triangulated the last summits of the Mercantour. Volume 9 is devoted to the "direct geodesic junction of Corsica to the French continent", as well as to the triangulation of the Corsican peaks between them. He set fire to lights using spotlights in Corsica on different summits (Cinto, Stello, Rotondo ...) in order to better locate them from the continent. Locating and positioning of the tops was done with a bezel (see below). The diagram of the "compensation of the geodesic junction of Corsica with the meridian chain of the French Alps" will make it easier for you to understand the work of Paul Helbronner at the beginning of the 20th century.

Paul Helbronner's children have created an association (APH), as well as a website www.helbronner.org. I invite you to visit this site, including the biography of Paul Helbronner (among other pages 6 to 10 on the subject of Corsica seen from the continent); As well as photos of the scientist. A selection of articles is also available on the website of the Paul Helbronner Association.

Corsica seen from the continent: identification of the summits

The Corsican summits are clearly visible from Cap Corse to the western part of the island of Beauty. You can (by clicking on the thumbnail) access a panoramic high definition identifying most visible summits (Stello, Biancu, Cinto, Minuta, Orba etc ...).

Some of our images in the press:

In the magazine "Terre de Provence" (text and photos)

In the magazine "Science et Nature" (text and photos)

In the magazine "Montagne" Italy

The Apuan Alps in Italy from the French Riviera

The Apuanes from the heights of Monaco, over the Liguria sea, in the Mediterranean. 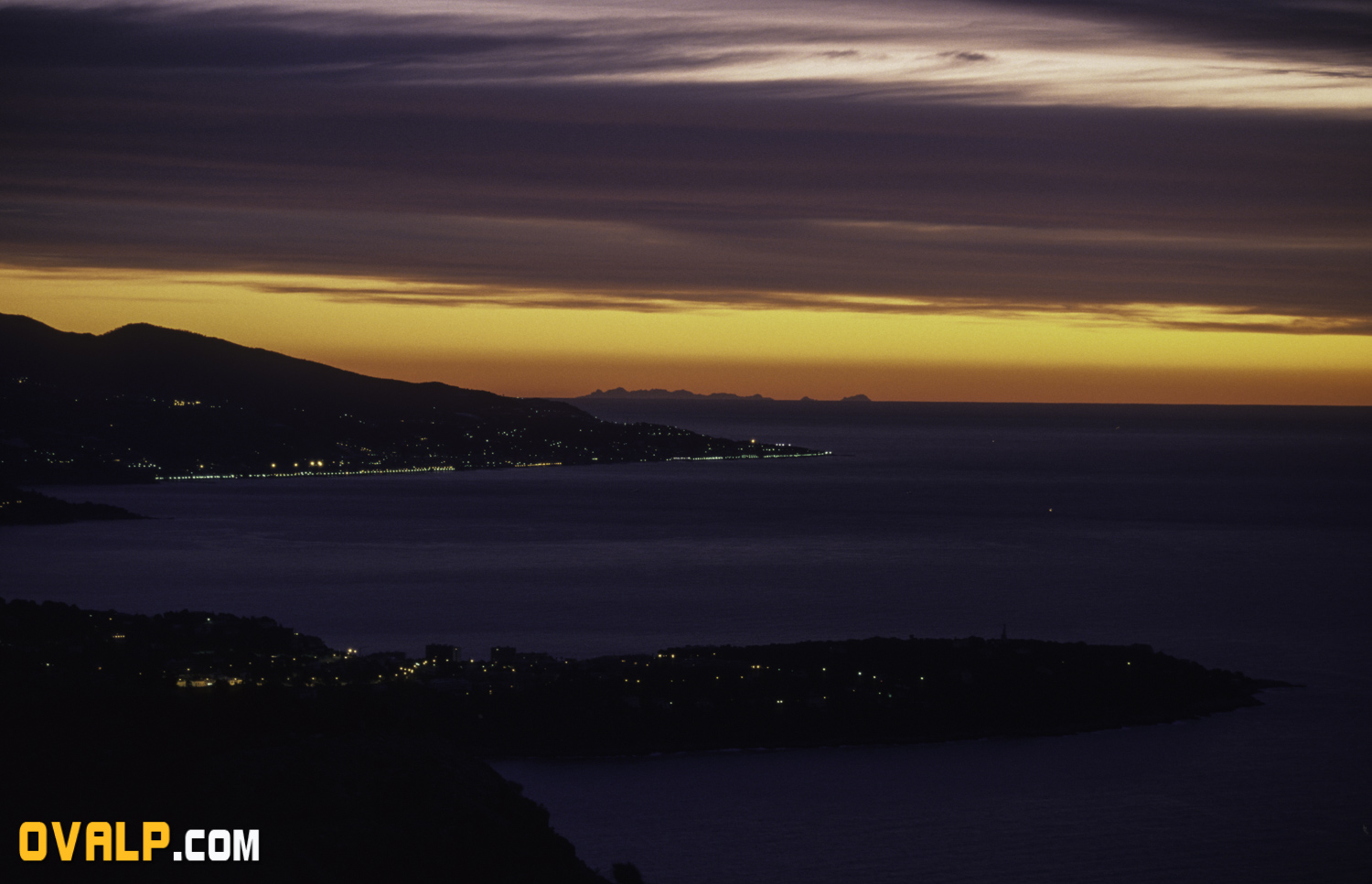 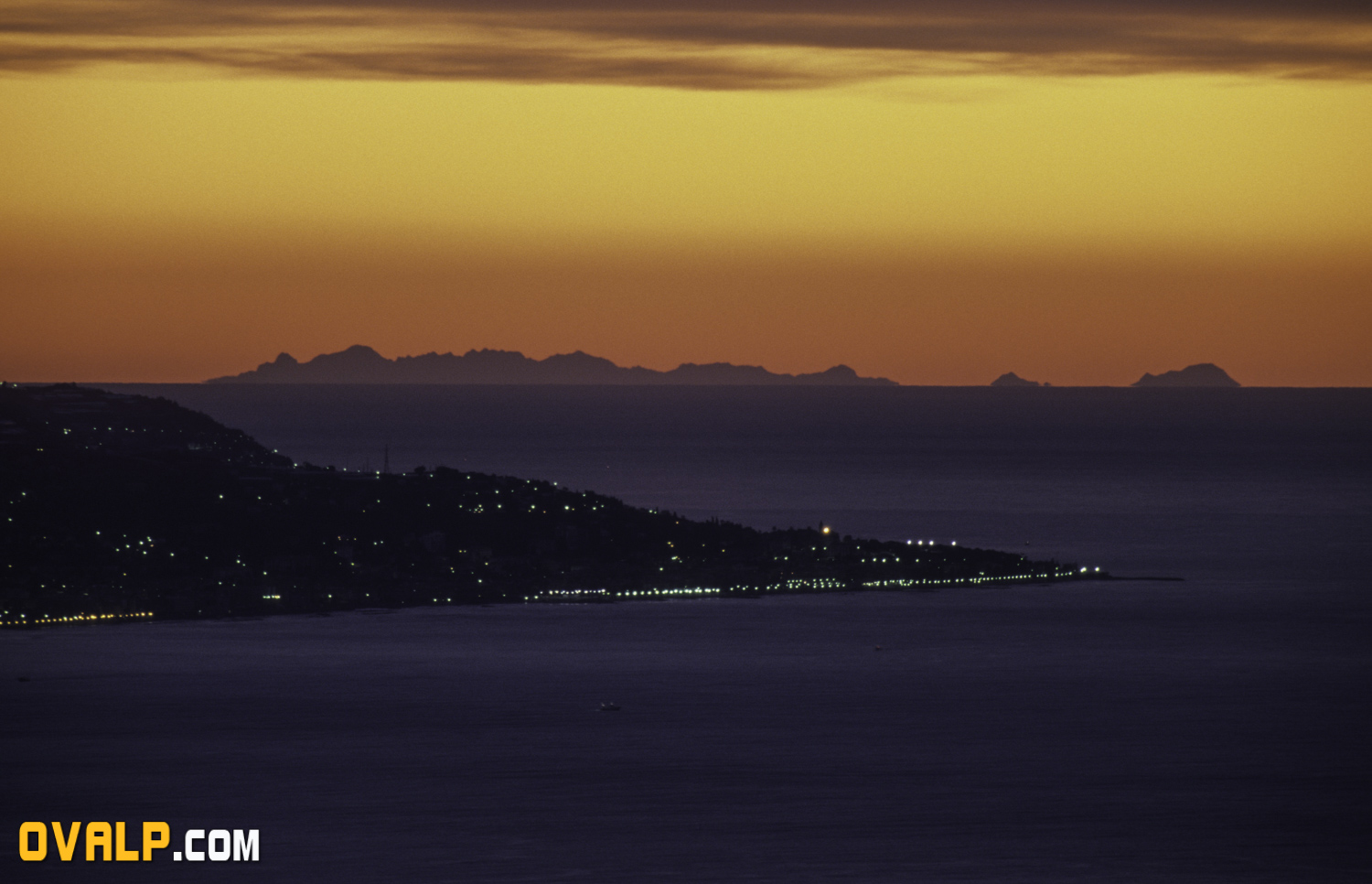 Sunrise and disappearance on Cape Corsica

And the continent seen from Corsica?

We had the surprise, because in the middle of summer, to see the continent emerge over the sea of Liguria. Photos HD from the Balagne visible here.

Some key figures related to Corsica seen from the continent

Corsica seen from the continent links

Menu Corsica seen from the continent :