Always a strange feeling of progress, and even emotion, to think that about half a century ago, I was baptized in this place. A life that passes, slowly but surely ... Many hours also fly over the building in a paraglider, wandering tourists passing through the alpine sky. Point out to them that this is the only place where you can see all the faces of the steeple at the same time ... nose in the wind

The religious monument occupies the center of the village. It dates from the 15th century and marks the reconquest of the Vaudois heresy. The church was renovated several times, recently thanks to "the association for the safeguard of the Saint Etienne church", the roofing was entirely redone on occasion. 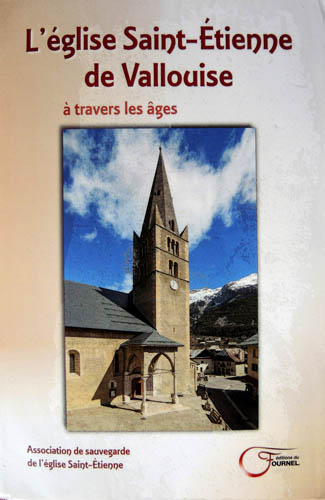 A very complete book, most of whose texts were edited by Chantal Desvignes-Mallet, chief heritage curator, published by Fournel editions will allow you to better understand the monument in all its aspects: human, architectural, historical, etc. Do not hesitate to cross the village square to buy the book from the sympathetic bookseller "Mots à mots" run by the no less sympathetic Christiane.

The so-called right door under the porch (south face of the church) is framed by “pillars” made of “pink marble limestone” adorned with a whole series of masks and friezes representing characters, the coat of arms of the dolphin, Greek cross , a bishop with a miter etc.
The upper part of the door is called the tympanum and represents the magi from the east: Gaspard, Balthazar, Melchior facing the little Jesus as described by the Christian religion.
The leaves of the larch wood doors also date from 1500 and are therefore more than 5 centuries old.
There remains a painting of Saint Christopher on the east facade overlooking the fountain which replaced the monument to the dead moved further.

The nearby Penitentiary Chapel, not to say adjoining, receives exhibitions and other craft sales in the summer. The Vallouise market drains its flood of tourists and Vallouisees who are still numerous to come to mass on Sunday morning ... The Vallouise festival in August spreads its animations all around the church.

A link to the church website (only french language) which will keep you informed of the dates and times of the various religious celebrations.