The Freinet days in Vallouise were a great success, alternating exhibitions, exchanges, film, readings etc ... A large audience, often retired teachers, unconditional Freinet, but also of the village inhabitants, participated in the success of these meetings.

As planned by the program, the pedagogical part took place mainly on Wednesdays thanks to a debate / conference but also with the help of large and well-made explanatory panels exhibited in the Bonvoisin room.

Resistance in Vallouise and Briançonnais in the Hautes-Alpes

The "Resistance" part allowed visitors to better understand the actions of the struggle against the occupying Nazis in Briançonnais. The exhibition of objects, costumes and weapons (Patrick Lemaitre), as well as the explanatory panels (Claude Altobelli) being particularly didactic and dynamic.
The conference of Tuesday afternoon, in the room of the very nice library of Vallouise, was in our opinion the highlight of these days.
J.P. Pellegrin author of the book "History of the FTP, Isère, Savoie, Hautes-Alpes" led this moment in a structured and rigorous way, starting from the general situation in France until arriving at the situation in Briançonnais. 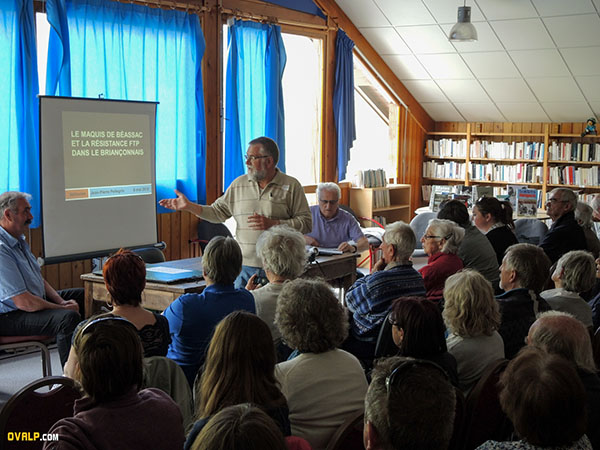 Patrick Lemaitre (Association "Souvenir, Safeguard and Military History"), always excellent, brought his incredibly provided knowledge about the local resistance.
A nice surprise came from the room, in the person of Mr. Henri Rolland who intervened on many occasions to share with us his direct testimony of the actions of resistance, in particular concerning the aerial drop attempts at the lake of the climb above la Roche de Rame and attempts to destroy the Argentière la Bessée water pipe supplying the steel plant vital to the enemy.
A participant, Eric Peythieu, in the room, also intervened to clarify several elements, such as the existence of Ukrainian and Polish supporters in support of local FFIs.
We remain dubious and worried, by the few young people present at this kind of conference, the public being very largely honorably old, "We have been what you are and you will be what we are" as the saying goes. Compulsive lover of a certain France not obviously interested so much in its history and the lessons that can be drawn at the beginning of the 21st century, which sees many extremism develop on the European continent.
The revolutionary and alternative activists, however numerous and active in Briançonnais, being moreover not more present ...
Supporters of the complete closure of the borders (or of their unlimited openings, in the end it is joined given the state of public opinion on this subject) do they remember that September 6, 1944, as recalled during these days, the second liberation of the city of Briançon was partly possible thanks to the African troops?
Does the society of leisure thus prevail on the indispensable duty of memory and the admiration which seems to us essential with the courage that some had, sometimes at the risk of their life, to defend us from Nazi barbarism and fascism ?
Who remembers the names of the local resistance fighters (for example Alfred Mondet and Joseph Seinturier), not to mention the anonymous names that some of the participants in these meetings evoked (Mr Gauthier in Vallouise?)? Will we ever know what Captain Ballet's identity really was?

Concerning Célestin Freinet and the resistance of the maquis of Béassac, we really regret the absence, for impediment, of Emmanuel Saint-Fuscien, author of the book "Célestin Freinet a pedagogue in wars 1914-1945 "wars 1914-1945 " which would not have to doubt , was the grain of sand concerning the role of Freinet in the resistance ... at least reading his book and his interviews on the subject.
Without foresight about the past, is it possible to build a future? Without solid and lucid foundations, far from any romantic vision will it be possible to resist as some of our elders did? More information on the maquis of Béassac in Vallouise here.
A big thank you to all the speakers and particularly to Claude Altobelli, passionate among other local history, effective, real kingpin and driving these days Vallouisiennes. Do not hesitate to visit the watermill he renovated, with others, in the village center, along the Gyr, behind the brewery Alphand.

Freinet days program in Vallouise in May 2018

Thanks to Claude Altobelli and the association"Travailler et vivre en Ecrins" for providing us with the information below that will likely evolve and become more precise.

In anticipation of the creation of a "Espace Freinet à Vallouise", the association "Live and Work in Ecrins" organizes in May "Rencontres Freinet". The theme: Élise and Célestin Freinet, Resistants and Pedagogues. 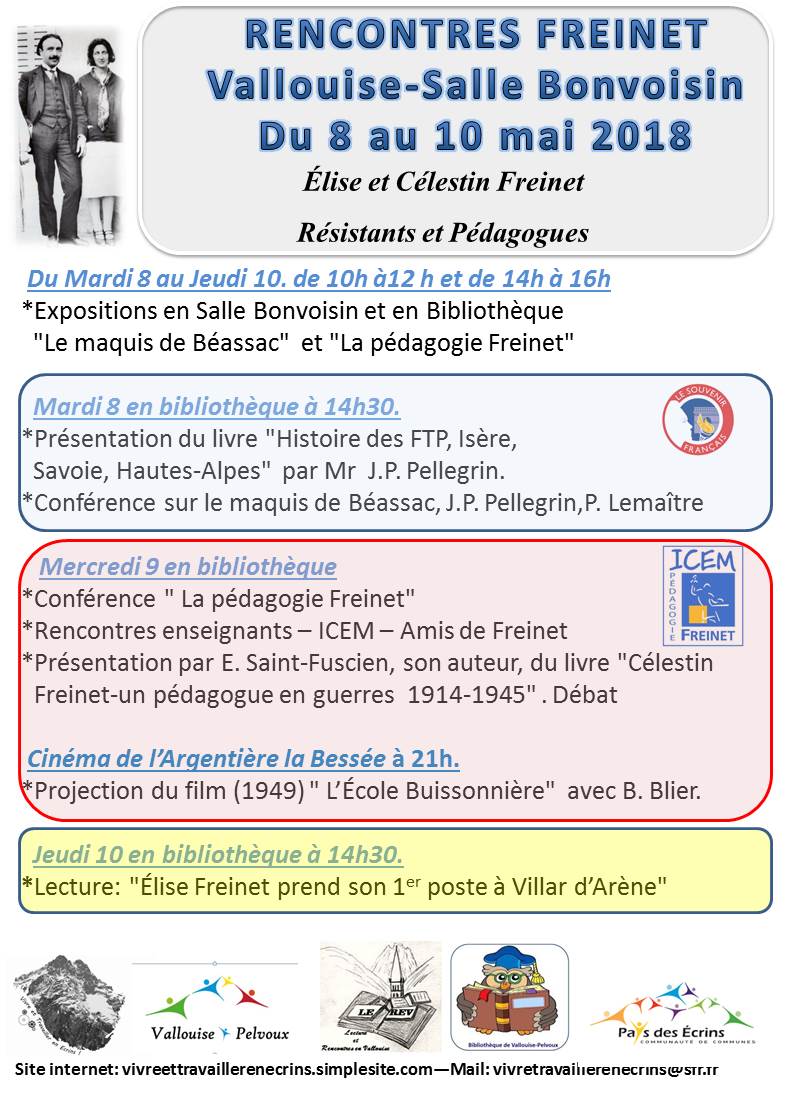