The show company Fartfeulu performed a magnificent performance in the beautiful alpine valley of Vallouise, in the middle of a fairly large crowd. A good first point, the show began on time which delighted the audience, as the cold night of this winter evening bit the lips and pricked hands.

Link to the official website of the company Fartfeulu https://www.ciefartfeulu.com 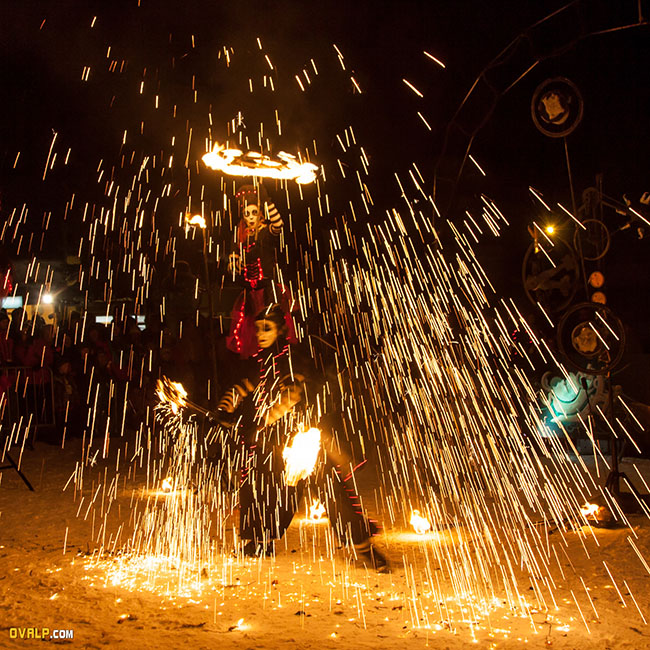 The Fartfeulu show revolves around the fire, the pyrotechnic effects and the games that the three actors (Judith, Eric et Bingo) present that evening realized with the help of a mobile decor skilfully realized; the heat of the flames illuminating and warming the audience. The characters, poetic clowns, makeup in the manner of Marceau mime, swirling and twirling in front of the public.

Like prehistoric men, comedians struggled to dominate the fire, to tame it, to possess it and to control it. A kind of picture of one of the phases of evolution, the control of fire, which allowed the human species to eat cooked and keep warm in all seasons as described in the book "Sapiens". An atmosphere also in the Mad Max, film of the last century, story of an end of the industrial world in search of fuel becoming more and more rare. Trances and voodoo dances on a carpet of snow to the rhythm of a well chosen music. Mechanical installations, wheels, gears, poles etc ... symbolizing a kind of modern time inflamed Chaplin.

The audience, captivated by the flames and the tournaments of the actors, was delighted by this show, which was applauded for a long time under the fireworks that closed the staging.