Célestin Freinet remains today a reference in the history of pedagogy. Philippe Mérieu, more nuanced teacher than some would like to believe, far from a compulsive "pedagogism", offers a fascinating article about Freinet which here is a short excerpt " We know that his denunciation of scholasticism (a term he used to characterize meaningless knowledge for the child to whom it is proposed) led him to invent "techniques" such as printing, school correspondence or surveys. For him, it was a question of placing the child in an active perspective in which he could rediscover school knowledge provided that it was necessary for the realization of his project ". Full text is available here in French, use Google transalte if required https://www.meirieu.com/ARTICLES/freinetetlesscienceseduc.pdf 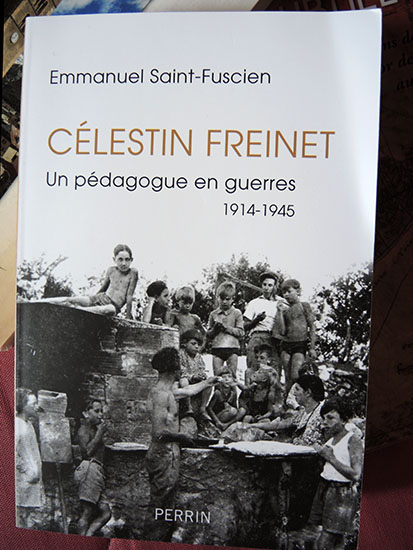 An exciting book that describes us, as its title indicates, the two wars in which the teatcher took part. We are particularly interested, for this small report, the period of the Second World War and resistance in the valley of the Vallouise (Hautes-Alpes), where lived Celestin Freinet at the end of the war.
The author tells us, very clearly, to have little tangible information about the actions of the pedagogue during this period: "it is impossible to say when exactly Freinet entered the war" (p173). And this despite the research carried out, attested by many documentary references. Freinet assigned to residence in the Hautes Alpes was the subject of a surveillance investigation by the local gendarmerie of L'argentière la Bessée following unfounded denunciations of "anti-national remarks".

There is a lot of uncertainty about his exact role and his actions during the end of the war. His statements, according to the author of the book, contradict each other. Over the years, after 1945, he attributed himself an increasingly important role through emphatic and poetic narratives.

A short quotation extracted from the book: "Extremely fragmented sources, contradictory testimonies, dates do not agree, the archives of the maquis of Briançonnais on the one hand, and those of the file of the resistant Freinet on the other hand only imperfectly to define the exact role of the educator. " (p180). 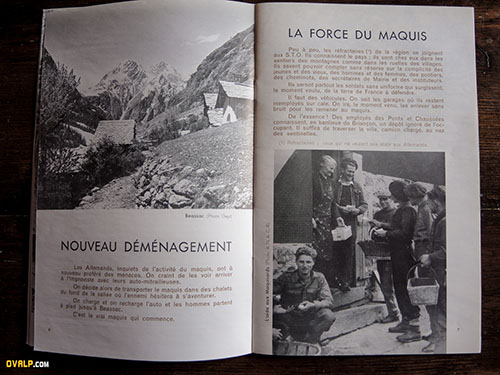 It seems that Célestin Freinet was not involved in any "hard force" action but only in logistical support operations, vital and vital for the group of maquisards, known as maquis de Beassac, in the Onde Valley, run by his brother-in-law Fernand Lagier-Bruno.
Nevertheless, it had an important role in the immediate aftermath of the war in all kinds of bodies, particularly within the Departmental Committee of the Resistance (CDL), assuming a role in the purification and social reorganization notably in the education sector.
He made, according to Emmanuel Saint Fucien, many steps to obtain the Legion of Honor without success, but obtained the right to wear the insignia of the FFI.

The Freinet brothers produced a book of poems illustrated with charcoal drawings very "romantic and emphatic" about the period of resistance. The always fascinating and very well documented blog of Jean-Marc Barféty, biophilus of the Dauphiné and the Alps, presents here the book « Images du Maquis ».

Another light, Delphine Laffont, in his thesis of History (see link below) summarizes the role of Freinet by these words which here is a short excerpt: "He joins the maquis F.T.P. of Briançonnais, but his participation is rather limited because of his rather precarious state of health. It participates less in the armed actions than .... It is in charge of putting in safety of the refugees, refractory to S.T.O ... ". The thesis (in french) is available here http://www.ville-gars.fr/downloads/freinet.pdf

Emmanuel Saint Fuscien, with diplomacy and finesse, explains the situation at the liberation with these few words "... the very complex moral economy of recognition [NDLR actions of resistance] set up in France of the 4th republic. .. "(p181) to describe the complexity of the situation in these periods of wars and crises. Many actors sometimes have very subjective memories and it is very human. The historian Henri Rousso coined the term of resistancialism, does he apply for Freinet? Probably not because the logistic operations remain effective and risky actions of resistance. It is of course impossible to carry some judgments, the risks incurred being the death ... and as the song says in a jingling tone qu’aurions nous fait ?

Freinet and the Vichy regime?

Another light, questioning, concerns Freinet and the Vichy regime, in an interview with Emmanuel Saint Fuscien devoted to the subject of school during periods of wars and more generally of "the social and cultural history of authority and of obedience ".
An excerpt from this interview describes a supposed episode concerning Freinet and the Petain regime: "Célestin Freinet has offered its full cooperation services to the various French Ministers of Education. To Marshal Pétain himself, he sent and sent a report and a project insisting on the convergence of view between the Freinet techniques and the reforms proposed by the National Revolution, opening the doors of his school to Vichy school experiments (these are the school authorities of Vichy who refuse his proposal)". Following the interview (in french!) here http://michelpeyret.canalblog.com/archives/2017/10/12/35761032.html

Do not hesitate to buy this book, which looks very well documented, published by Perrin, particularly informative and revealing of the French history of this time but also of the way it was transmitted to the following generations!
We also offer some short reproductions of the "Work Bulletin No. 584" by Celestin Freinet describing the maquis of Briançonnais.

Importance of the obligation of memory obliges concerning the local resistance, you will find images on this page of the commemorative plates in honor of Alfred Mondet killed August 19, 1944 and Joseph Seinturier killed on July 3, 1944 by the Nazi occupants in the sector Prelles and Argentière la Bessée.

Images of the commemorative plaques of Alfred Mondet, Joseph Seinturier, the maquis of Beassac along the Onde and extracts from a booklet edited by Freinet concerning the maquis