Refuges refueling by air in the French Écrins massif

A few seconds of flights allow the revolving carriages of heavy loads at high altitude, where endless human or animal caravans would take days. The helicopter has many qualities in the mountains: comfortable in the turbulence, agile in steep terrain, precise maneuvering etc ...
The following video captures were made at the place called "Spring Carpark of Pré de Madame Carle" in the Vallouise Pelvoux village, in the beautiful French department of the Hautes Alpes. During the trip over the Ecrins National Park, the helicopter is subject to very strict overflight authorizations for this aerial work mission, in order to limit as much as possible the disturbance of the local fauna (birds of prey, chamois, ibex, etc.). ).

Video (with mobile phone) aerial work in the mountains

Only "Choucas 05", the EC 145 of the police of Briançon, navy blue color (armed every other week either by the first responders CRS, or by the PGHM) normally frequents the places to rescue simple hiker or "conquerors of the useless "according to the expression dedicated by mountaineer Lionel Terray. 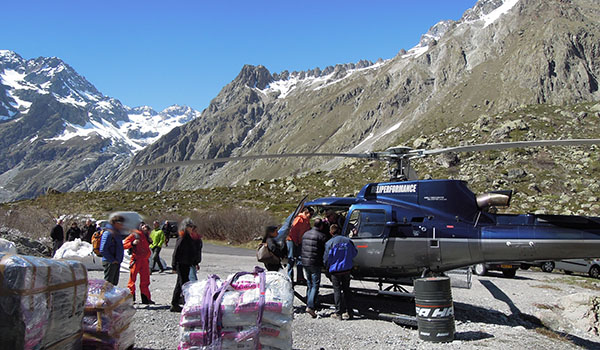 Helico Pre Madame Carle From time to time you may come across a Eurocopter EC 145 red and orange civil security, it is often in the sector, one of two "Dragon 38", based in Isère.

The most concerned about global warming will emphasize the eternal dilemma between the consumption of black gold, kerosene and the preservation of the environment ... It is difficult to reconcile the "needs" of our leisure society, even if they are wild ... and the limitation of melting glaciers ...

This does not prevent us completely from keeping a wondering look, in front of this incredible flying machine and the prowess of the flying pilot on these few video sequences.


Warning: Trying to access array offset on value of type null in /home/ovalp/www/a-lab/ovalpcom/administrator/components/com_widgetkit/plugins/content/twitter/src/TwitterOAuth.php on line 368

Warning: Trying to access array offset on value of type null in /home/ovalp/www/a-lab/ovalpcom/administrator/components/com_widgetkit/plugins/content/twitter/src/TwitterOAuth.php on line 368