Two fires ignited the forests of Briançonnais during the month of July 2003. The first above the Argentiere la Bessée was significantly more important than the second which took place a few days later between Les Vigneaux and Parcher, hamlet of the commune of Vallouise. From memory the first fire over the Durance and the national N94, under the head of the Puy, was triggered by construction and the second work of unknown cause. 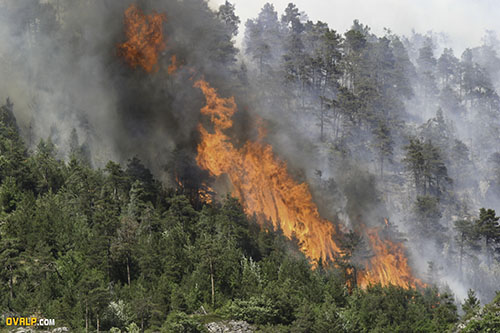 The peculiarity of mountain fires probably lies, even if we are not specialists in these subjects, in the difficulty of access for firefighters and in the versatility of mountain winds (venturi effects, inversion and reinforcement of valley breezes, etc.). ..).

The fire Vigneaux was initially attacked by a Canadair Noria with a probable reloading of water on the lake of Serre Ponçon nearby but populated with any kind of small pleasure boat. The CL 415 did not stay longer than some drops because of the simultaneous fires in the south of France (Var, Alpes Maritimes, Bouches du Rhone etc ...).

Civil Security Unit of Brignoles (UIISC7) in the Southern Alps 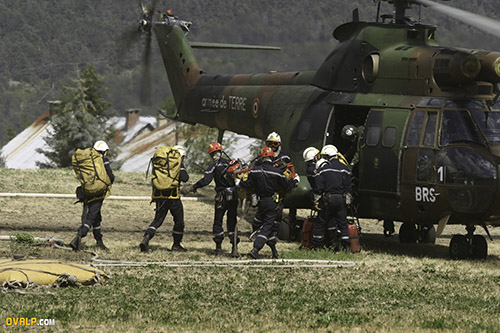 In addition to the always brave and dedicated local firefighters, airborne units of the Civil Security Unit of Brignoles (UIISC7) intervened to contain the fire and the fireplaces of recovery thanks to tanks of water carried on the spot by Super Puma of the Army (Alat). The UIISC7 is a real commando anti fire, acting also on other types of interventions: earthquake, floods, natural disasters of all kinds. This civil security unit is rapidly deploying assistance to people in France but also abroad.

A smaller helicopter also participated in the fight against fire with reloads from the small lake Vigneaux. Germany even sent a Super Puma as reinforcement in the Hautes Alpes. The firefighters did a lot of work, but it was from memory that the rain came to the end of the flames.

The Parapin wood (Montbrison National Forest), fourteen years later, keeps heavy traces of fire. Nature has not yet managed to reclaim the site despite the planting of new trees on site as evidenced by the on-site images taken during a spring walk in 2017.