A few drops of blood pearled from his right ear. Straight leg as disarticulated, the axis of the pelvis more than 60 ° of the shoulders. One eye slightly open and the other closed, flickering lips. Irregular moans, like a protest. It's nice, very beautiful. The azure sky could suggest a beautiful summer day but an unbearable drama shoots the atmosphere ... 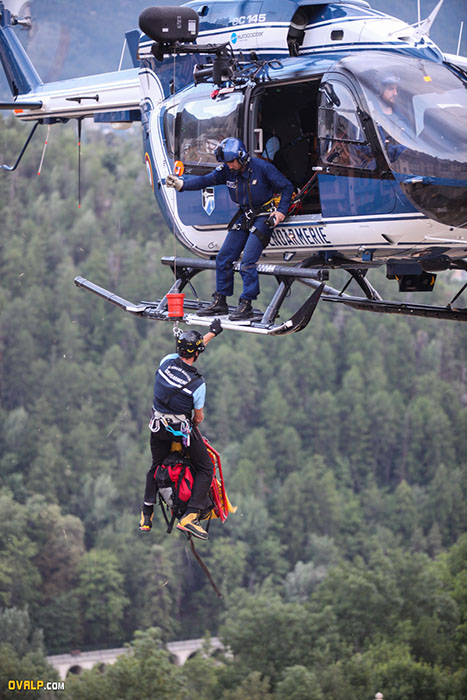 A few moments earlier, the two lovers, walking on the path above, hear funny moans, groans deaf.
- " What is that noise ?"
- "Surely a sheep or a goat stuck in a thicket? "
A guy runs down the slope, excited, tense: "Where is he? He disappeared just after takeoff!
All three descend right along the escarpment for a hundred meters and find the paraglider still hanging on his sail, motionless, on the ground. An image of puppet, twisted body, blood ...
Very quickly one of the two hikers grabbed his mobile phone, even before approaching the body. The two others, panicked, come in the immediate vicinity of the paraglider.
He had taken off the first of his group, a few minutes, some hundred meters above, from the flight area of ​​Puy Aillaud, in the Vallouise village.
The aerological conditions were far from optimal ... The north wind just above takeoff, facing south, sheared the paraglider that closed to the right on about half of its wingspan.
Sudden 360 ° rotation, cataplexy of the pilot unable to react. Violent impact on the ground, full force, crushing in the steep and steep slope, half scrub, half sharp rocks.

The emergency number, 112, rang only once before Codis de Gap answered the call, asking the caller first to calm down, then start by saying his name, locate himself and indicate precisely and succinctly the nature of the accident.
The call center shook the witness, feverish and trembling, waiting for help. The operator came back to the man on the phone to ask for more details (better describe the place, explain the situation of the accident, etc.) to guide well, guide the stakeholders.

Alert at the air detachment of the gendarmerie (DAG) Briançon in the northern Hautes Alpes. The Codis (departmental operational fire and rescue center) reports a request for intervention in the municipality of Vallouise. The pilot, the flight engineer and the two first aid workers on this day are hurrying towards Choucas 05, the EC 145 rescue helicopter. Take off in a few minutes to get the doctor, already alerted, on the roof of the hospital Escartons a few hundred meters away.
Go up and pass over the Montbrison massif or follow the Durance and enter Vallouise by the Vigneaux. Second option, it will be faster. The twin engine goes in the sky, the five occupants, quickly, develop an intervention strategy.They know each other well, work very often together, have common training.

A first aid will be placed at a safe distance from the victim, will secure the premises to prevent the paraglider from re-inflating under the effect of the rotor of the helicopter. The situation would then turn to over-accident, dramatic; embarking, at worst, the helicopter in turn to the ground. Disaster scenario. The doctor will then be hoisted to stabilize the injured person. The second rescuer will join his colleagues on the ground to prepare the hoist and evacuation to the hospital. 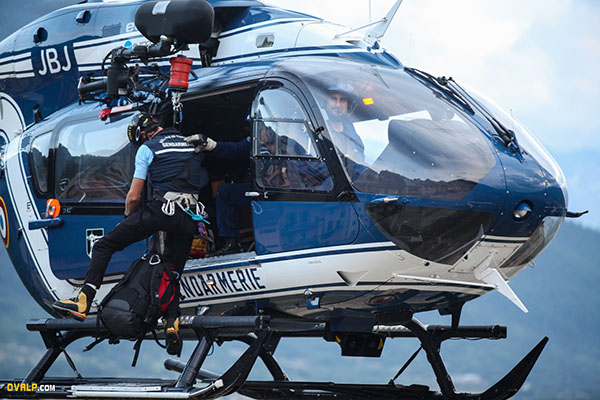 Less than 30 minutes, after the unfortunate vacationer bounces violently on the planet, Choucas 05 flies over the area. The first hour ("Golden Hour" as the Anglo-Saxons say) sometimes offers an ultimate last chance to the most serious victims.
The paraglider, between life and death, packaged in the box and accompanied by the rescuer enters the cockpit of the EC145, followed by the doctor and the second rescuer. Direction the hospital of the sub-prefecture of the Hautes Alpes. First aid and on-site diagnosis. Sanitary evacuation to the University Hospital of Grenoble at the Tronche the same evening, still thanks to the airborne assistance briançonnais. Many operations and months of hospitalization besides the reeducation.
The injured will survive ...

How is this miracle possible? Where in 80% of other countries in the world, relief only terrestrial, or paying, see nonexistent would not have allowed this life is finally saved.

Some video captures of the rescue helicopter at random encounters in the Briançonnais, the Ecrins massif, at training or during demonstrations.

The means of mountain rescue

Several operators carry out this mission together: the rescue workers of the PGHM (High Mountain Police Mounted Police Platoon) or the CRS (Republican Security Company) of Briançon mountain who use the helicopter of the DAG (Air Detachment of the Gendarmerie), if the weather permitting. A team of doctors from the specially trained mountain rescue hospital participates in the most medically critical situations. 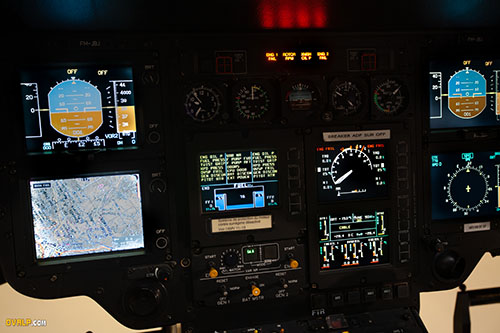 Captain Eric Guichard, pilot for many years on different machines, also instructor, directs the air detachment of the gendarmerie Briançon. The base has a helicopter Eurocopter (company today called Airbus Helicopter) BK117, said EC 145, or Choucas 05. The machine equipped with two turbines, a large cabin and high performance has an avionics « glass cockpit ", as in a modern airliner.
The DAG Briançon (05) is with its counterparts in the hexagon a real network of relief air: Chamonix (74), Modane (73), Digne (04), Hyères (83), Ajaccio (2A), Velizy-Villacoublay (78), Amiens-Glisy (80), Montpellier (34), Tours (37), Bayonne (64), Rochefort (17), Rennes (35), Saint-Nazaire (44), Tarbes (65), Dijon ( 21), Metz (57), Égletons (19), Colmar (68), Mimizan (40), Toulouse (31), Pamiers (09), Lyon (69), Mérignac (33), Limoges (87).
The civil security also has the same device that calls itself "Dragon" followed by the number of the attached department. The closest to the Hautes Alpes are the two Dragons 38 that can sometimes be seen in the Ecrins massif when Choucas 05 is no longer available. We offer on this same website / blog images of Dragon 06 (Alpes Maritimes) and Dragon 63 (Puy de Dome-Auvergne).

One of the local peculiarities, for example compared to the base (DAG) of Chamonix, is the distances between the heliport and the places of intervention. The Mont Blanc massif, more compact than that of the Ecrins, makes it easier to come and collect additional relief equipment at the DZ des Bois, on the outskirts of Chamonix, located at the foot of the high peaks. The distances in Ecrins are larger, the valleys more wild.
Choucas 05, whose classical perimeter covers the department of 05, often moves far enough from Briançon towards the south or the west of the department, and even much further in Savoie, Isère or Alpes de Hautes Provence, if required. 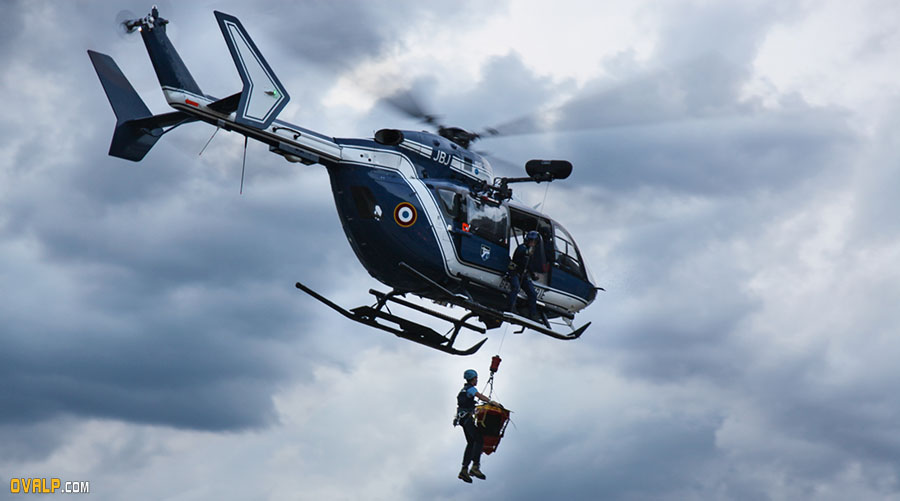 The technical characteristics of the EC145 make it particularly suitable for rescue: 90 meter winch, power of both engines to fly and climb faster, for example at the top of the Barre des Ecrins or Pelvoux, night flight using night vision binoculars for cases of vital emergencies, exceptional carrying capacity etc. The machine has a range of 600 km, rises up to nearly 5000 meters depending on its weight and density of the air. It holds the altitude in case of failure of one of its two engines up to 2400 meters of altitude. The flight in high mountains
requires specific skills as the aerology, rugged terrain make technical flights.
All these qualities that did not have the former Alouette 3 (A3) yet very agile and manageable and you can find some pictures on this page.

The DAG Briançon, actually housed in the town bordering Villard Saint Pancrace, in addition to being the headquarters of the air vector relief is also Mountain training Center (CVM) for improvement and qualification of pilots. Mountain flying has marked characteristics both in terms of aerological conditions (folding, turbulence, visibility etc.), aerodynamic (lower density of air at altitude ...) that require specific learning.

Click on the links in orange to move around the 360 ° virtual tour and access other angles of view. 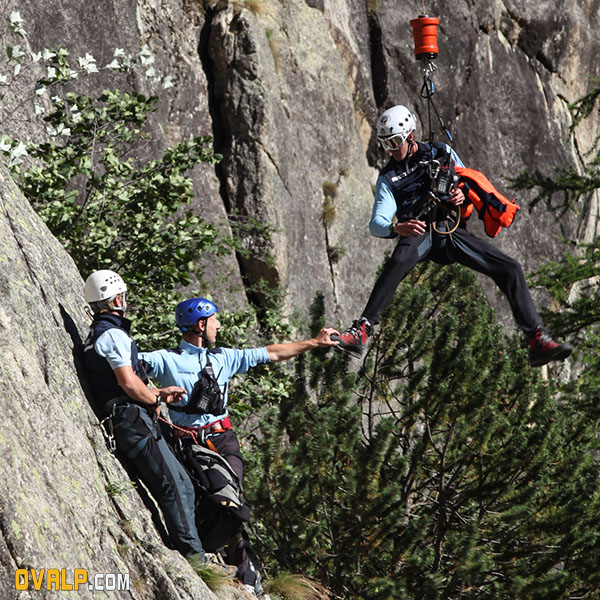 The PGHM and the CRS take turns every other week. Two rescuers provide permanence on the base, ready to leave immediately. Two others in pre-alert activable in a few minutes. A third pair is ready in just over time.
About twenty members constitute each of these groups which alternate between relief, training and rest. Three quarters of rescue workers have a mountain guide diploma, as well as various qualifications of rescue workers. Intervention cultures may vary slightly between CRS and PGHM but the results and objectives are the same: to save and assist those who need it.
Common sense, efficiency and dedication take precedence over all overly burdensome and pre-established procedures. Rescuers have great experience whether on the basis of Briançon or in other assignments as for example in Chamonix.
Note that rescue, in case of bad weather, or in the middle of the night can not always use the air route and therefore reach the victims by land using 4/4 vehicles, snow scooters, if possible, then on foot or ski ...

A team of twenty doctors is available, on a rotational basis, from the Briançon hospital, to board the helicopter or participate in land rescue caravans. Specialist resuscitation in hazardous environments and emergencies, they also have the skills to develop autonomously in mountain environments. In a few minutes the on-call emergency doctor sits on the roof of the hospital and embarks on the helicopter projecting to the emergency site.

Always be cautious during your leisure activities, a small accident in the mountains can have serious consequences. Take the time to analyze the conditions, do not hesitate if necessary to give up an exit or activitée. Enjoy the services of mountain professionals (guide, guide, ski instructor, paragliding, mountain biking etc ...) allows a safe practice even if zero risk does not exist in an open and wild environment. Consult the weather reports to know the avalanche risks in winter or storm in summer.
The weather conditions do not always allow the airborne intervention. Rescuers will always do their best to assist you, but do not forget the financial cost to the community, as well as the human commitment and potential risks of relief.
In case of a serious accident dial 112, indicate your name, your position and describe the situation precisely and calmly.

Thank you to the PGHM, CRS and Captain Eric Guichard for their kindness and time to answer our questions. 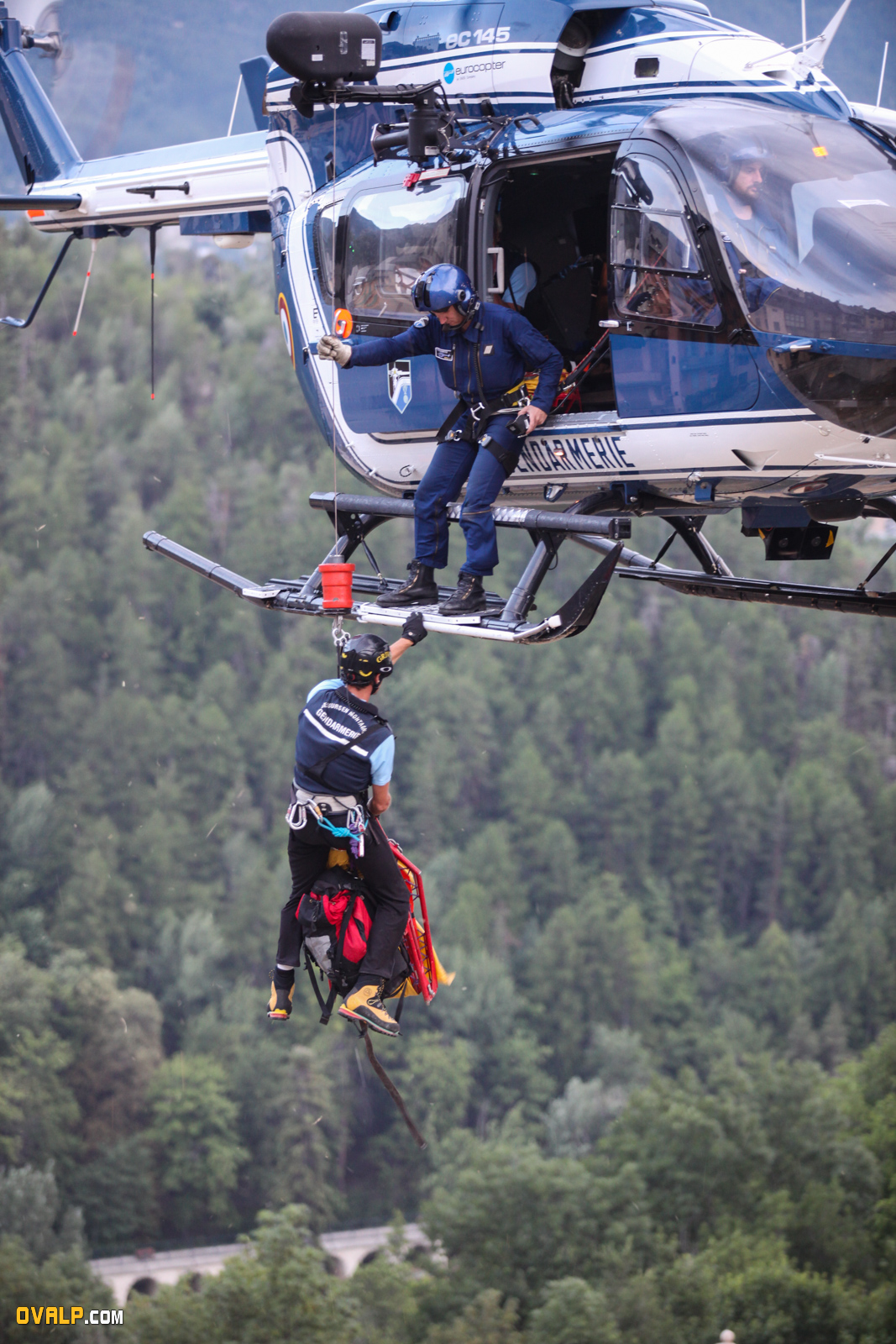 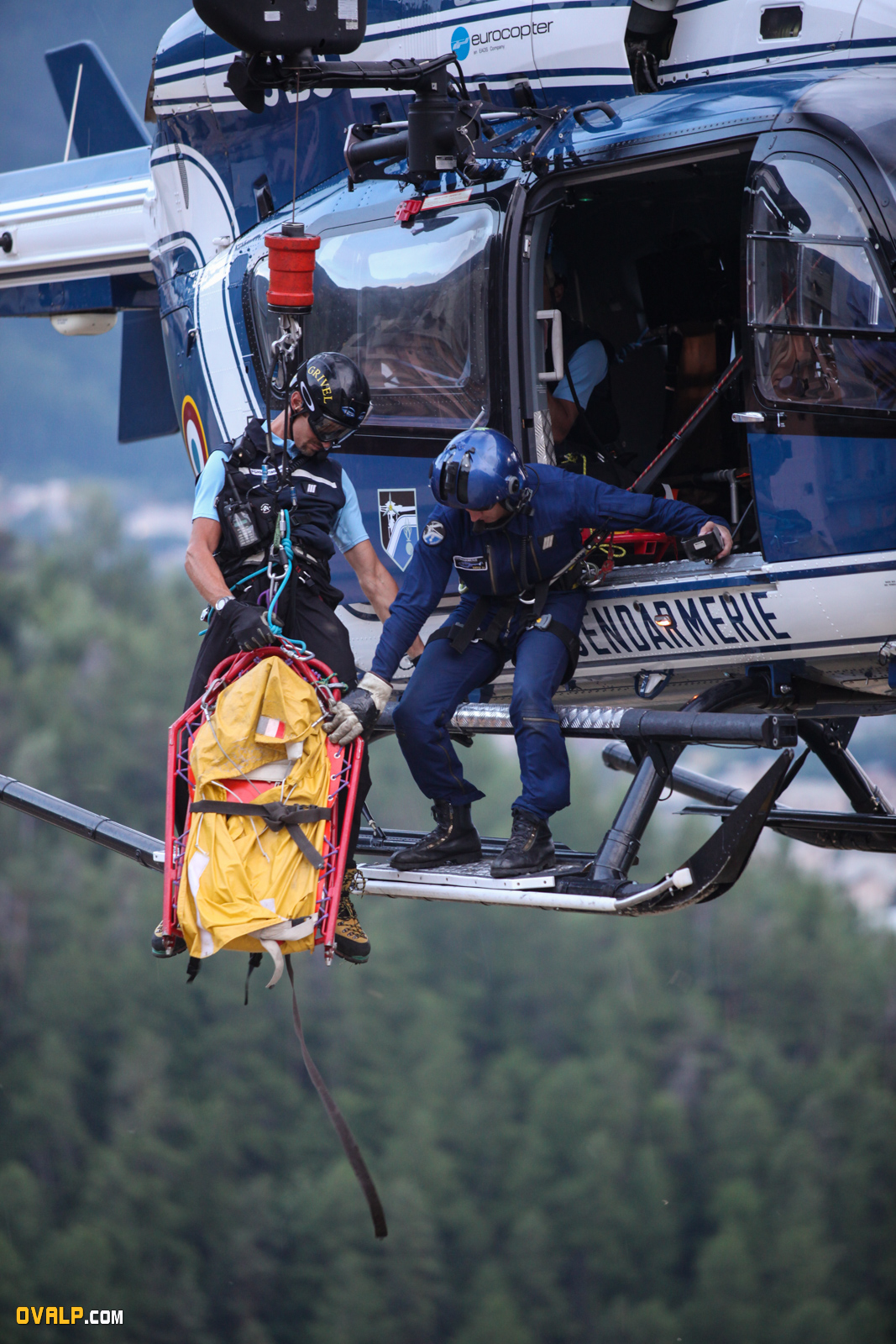 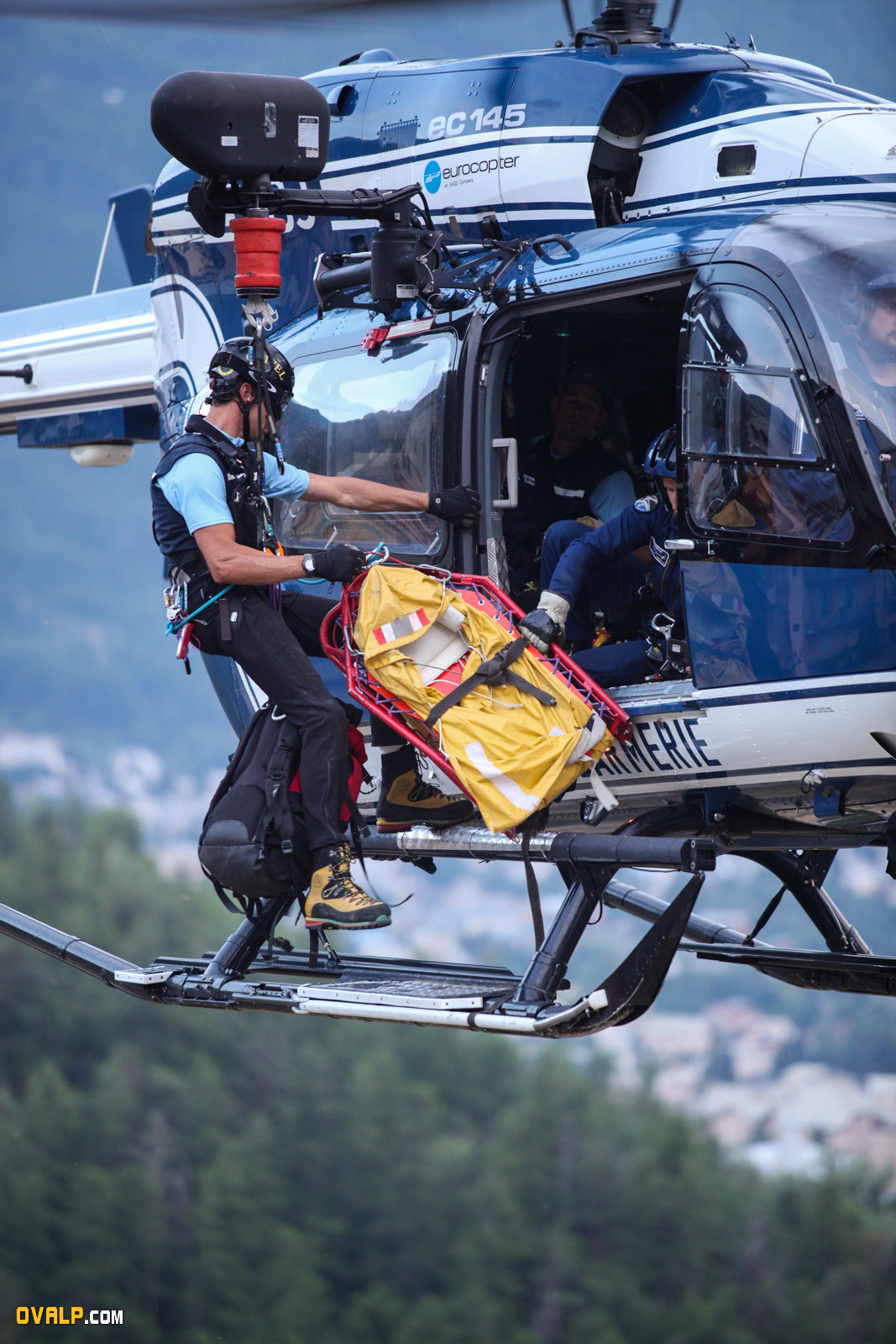 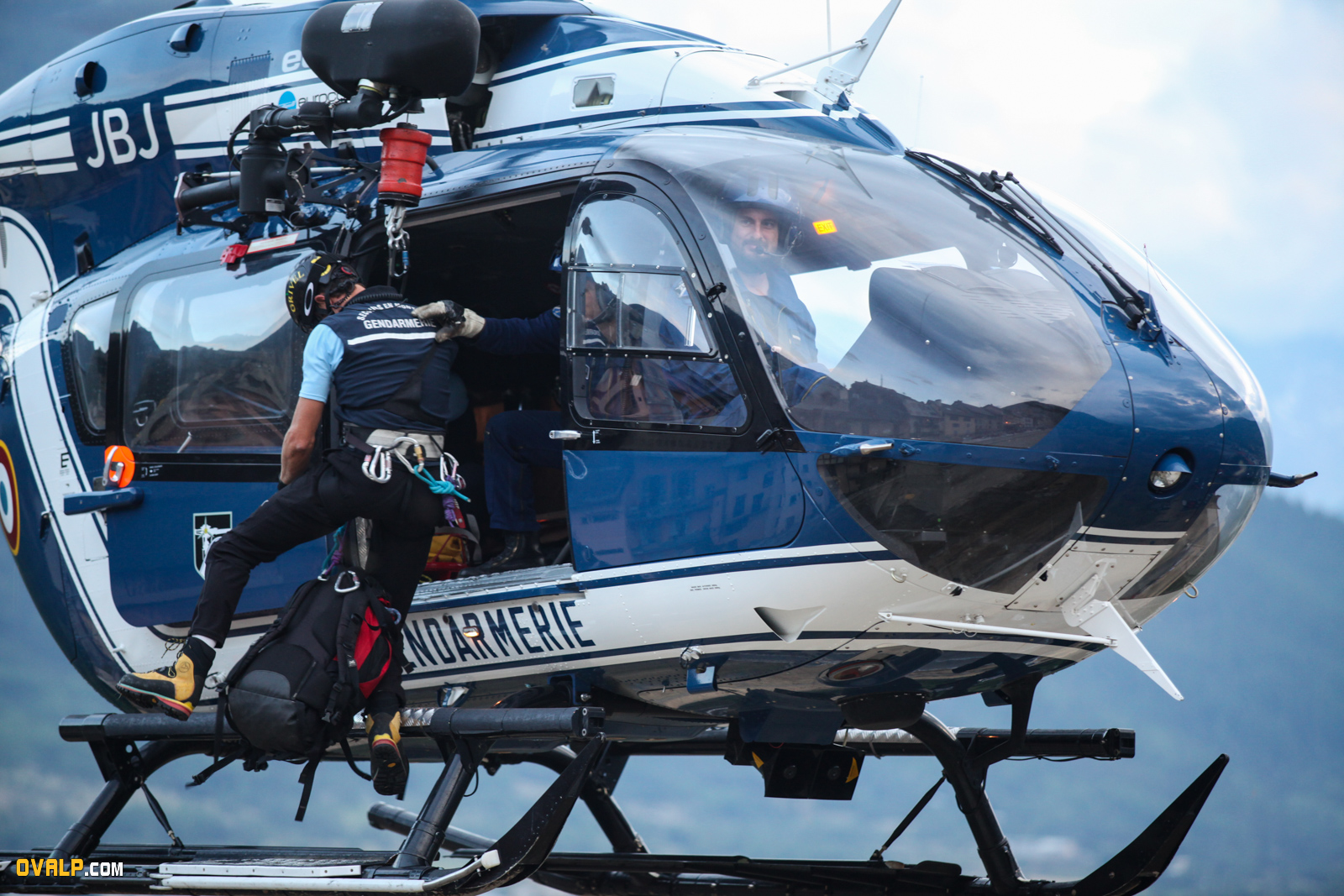 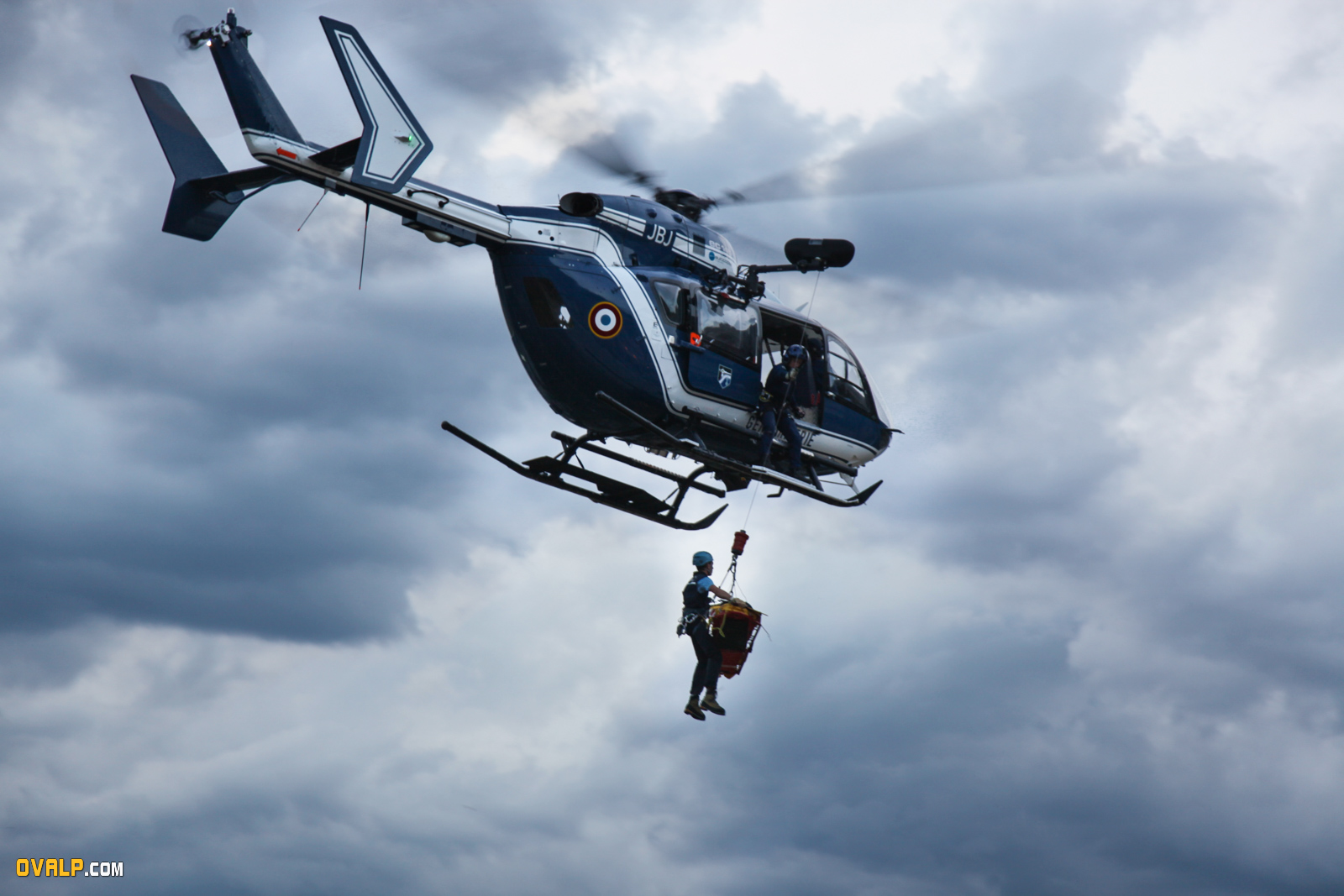 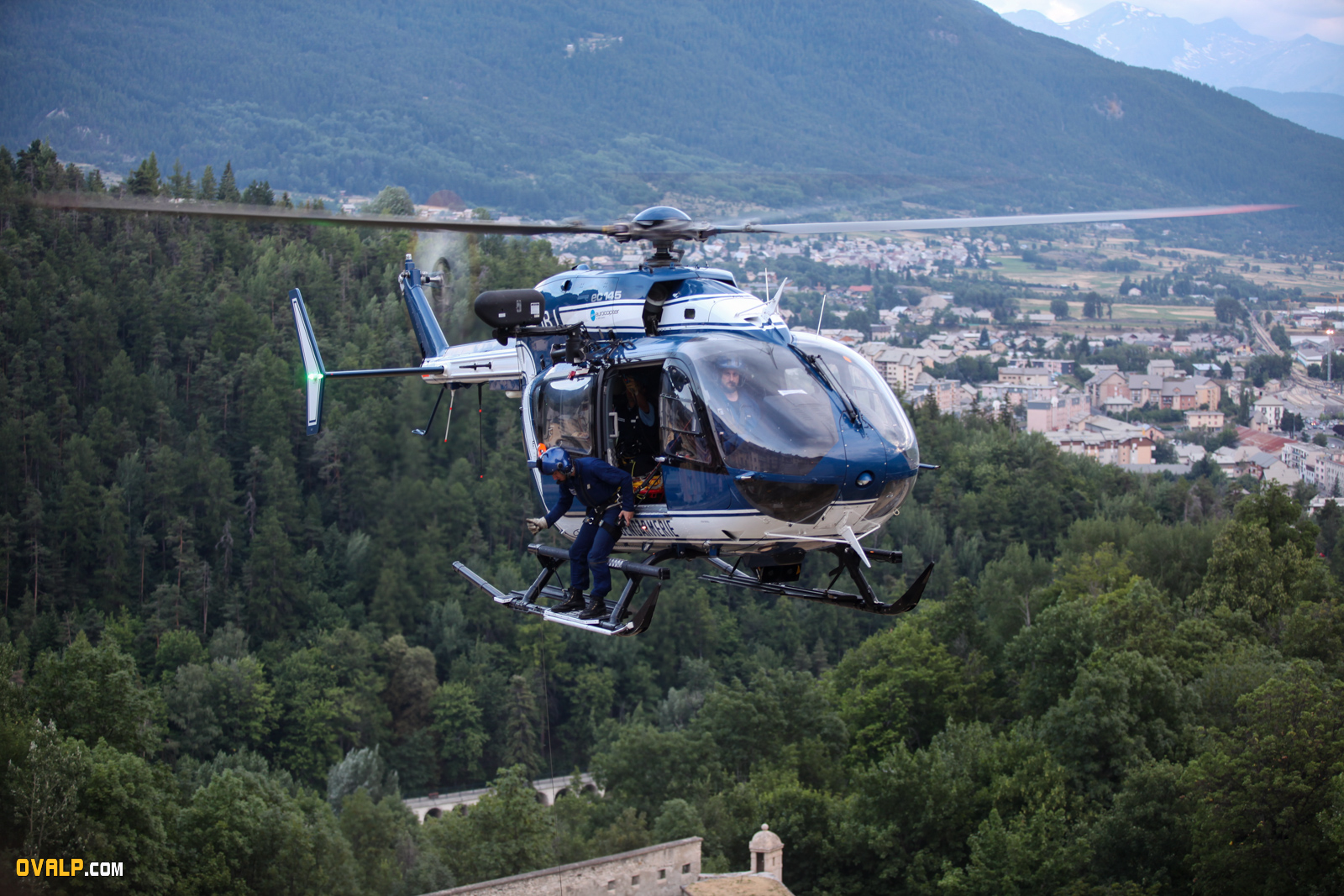 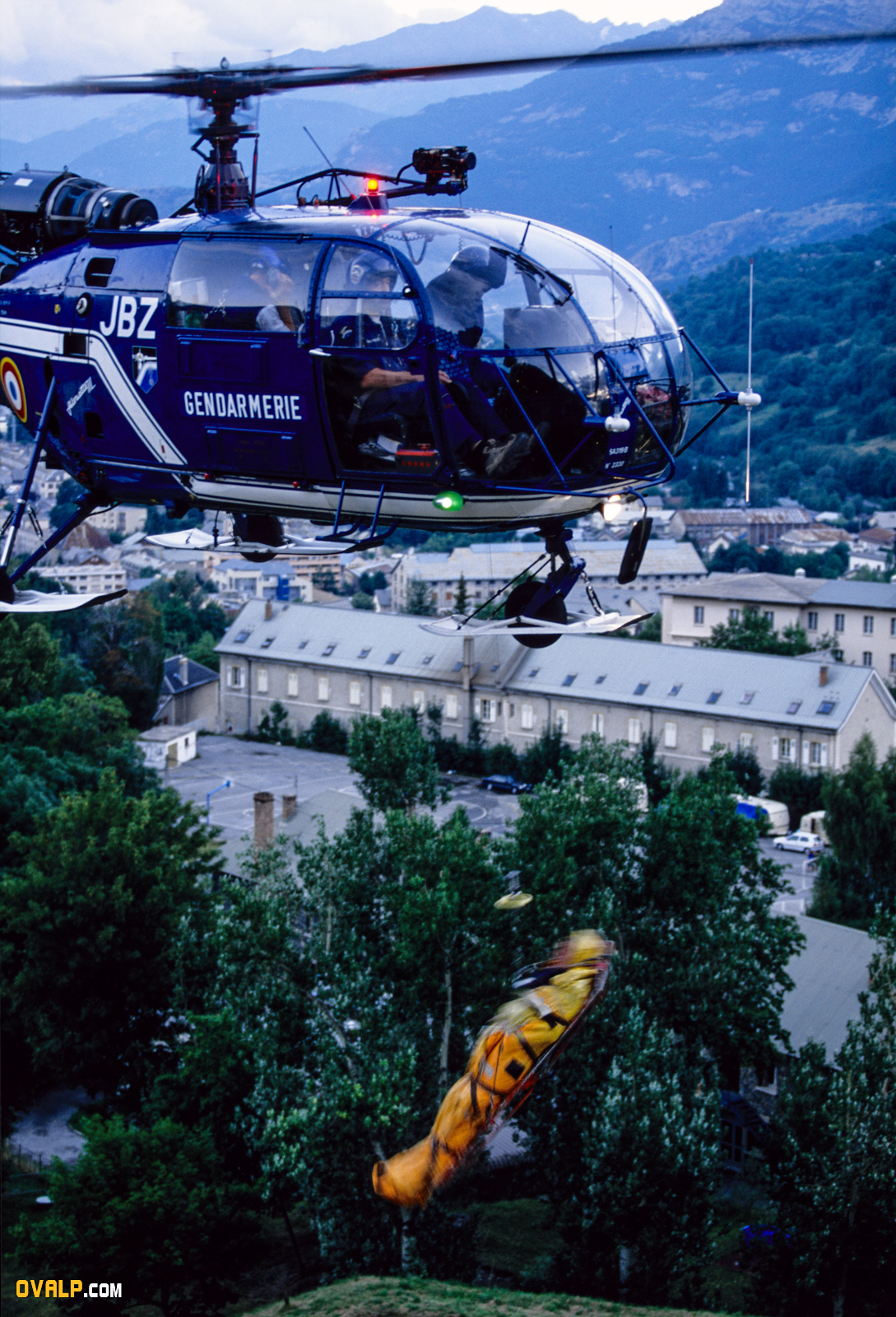 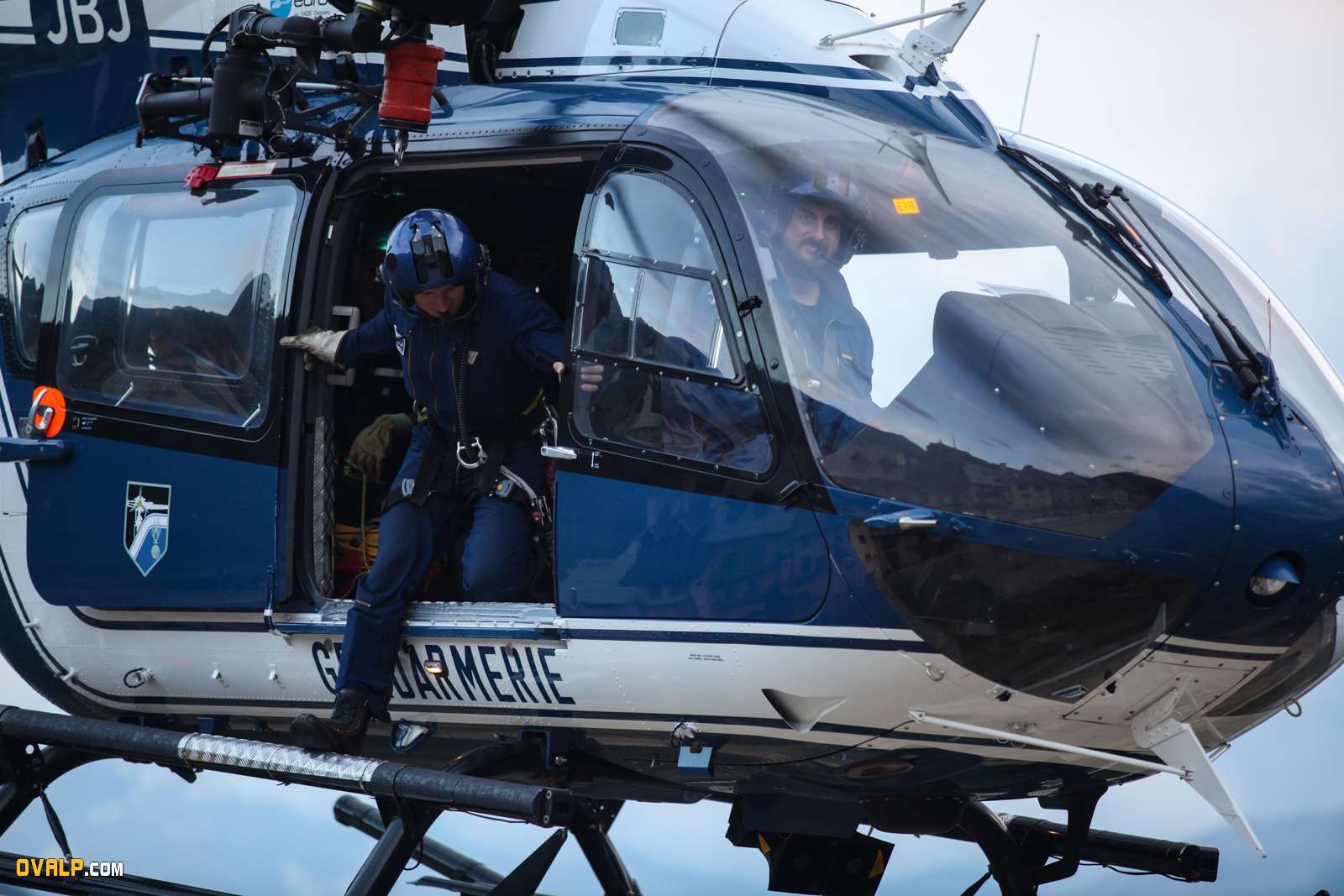 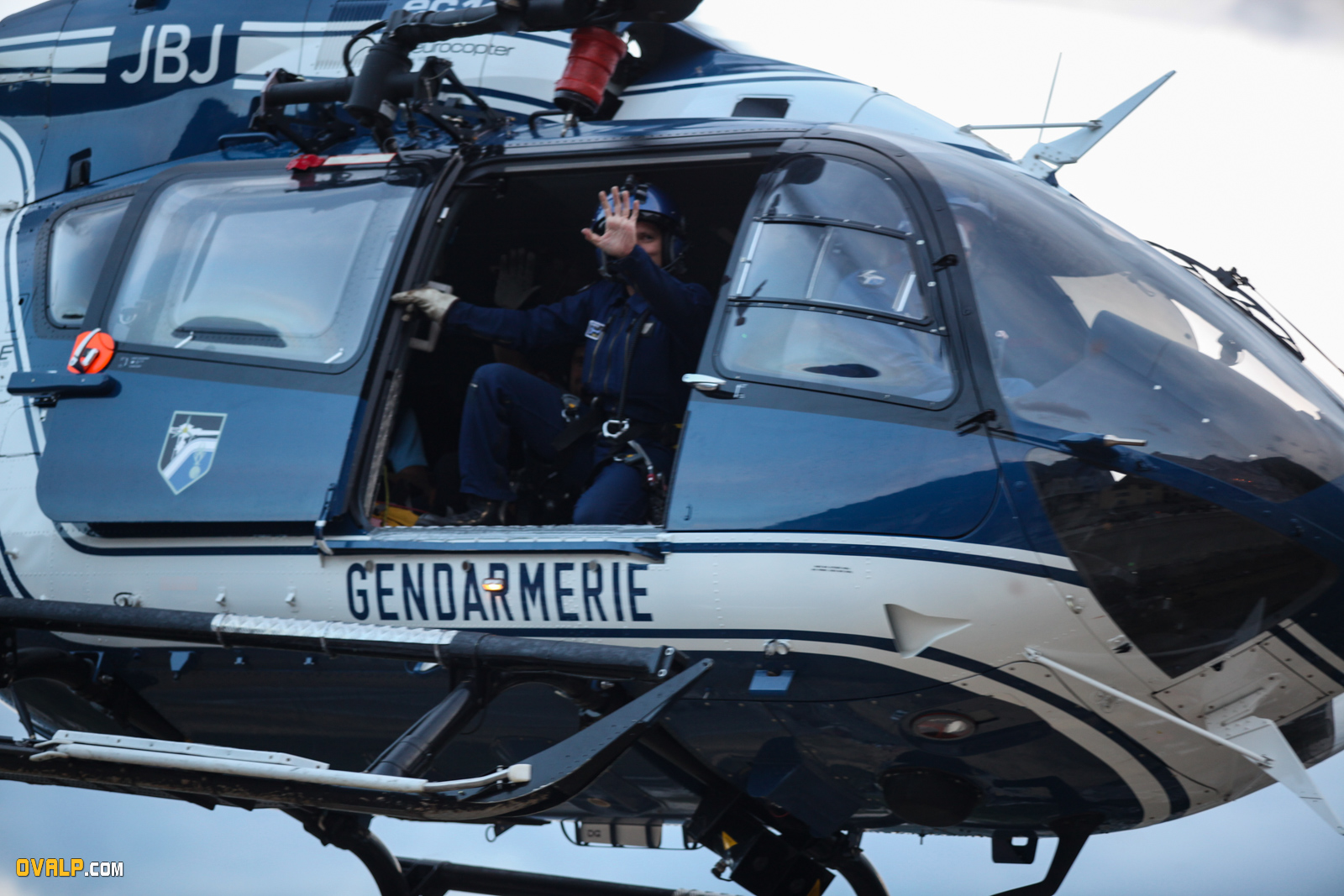 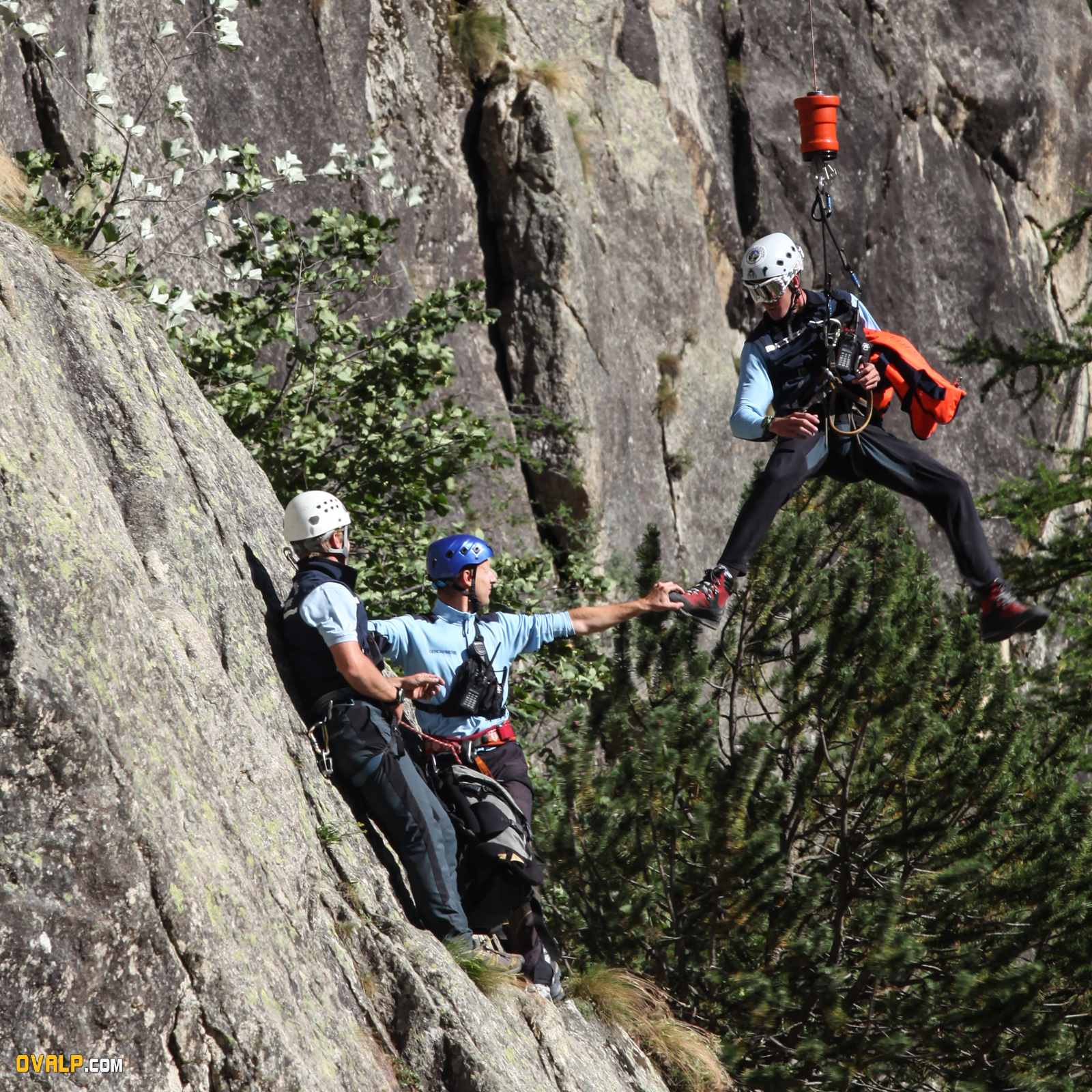 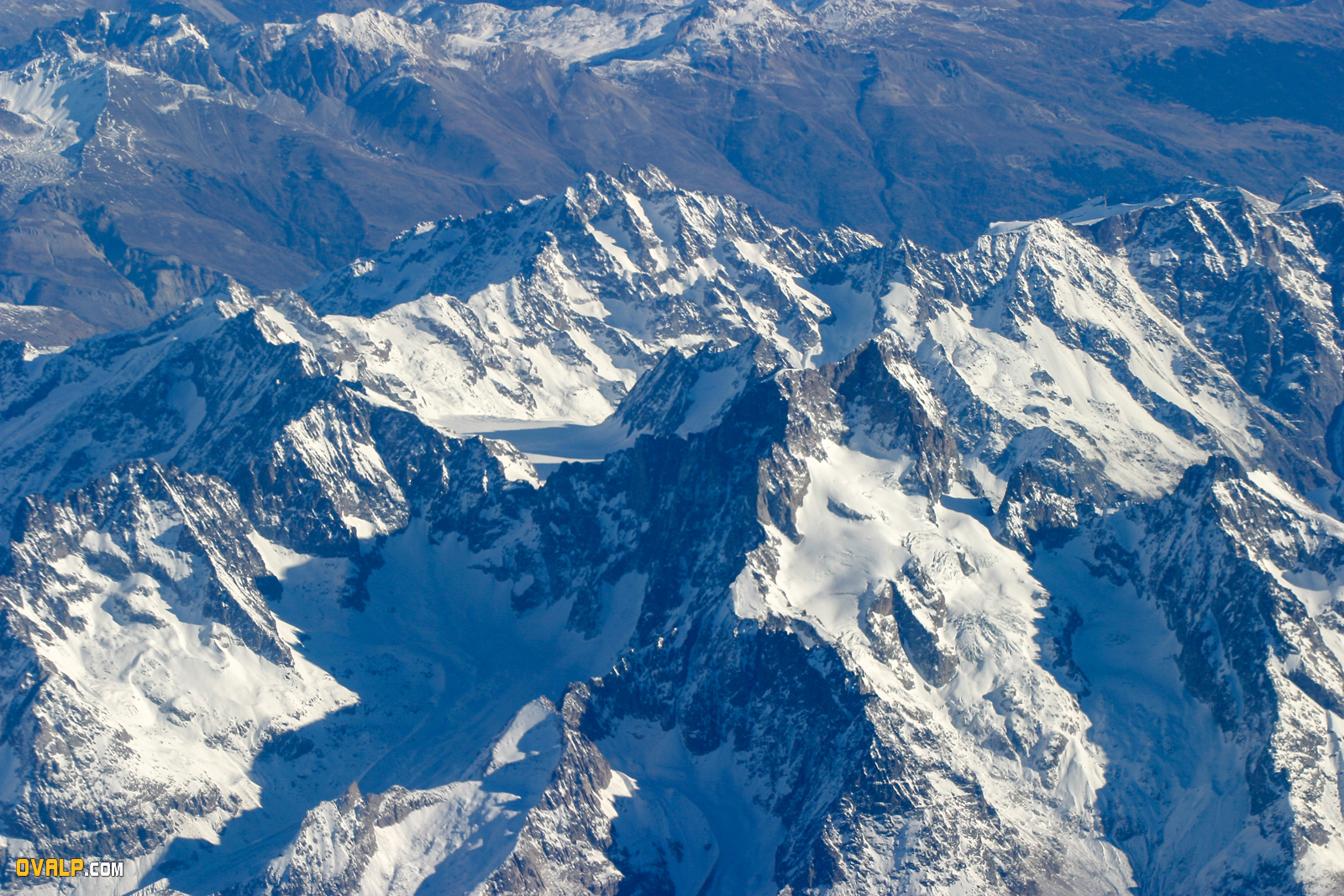 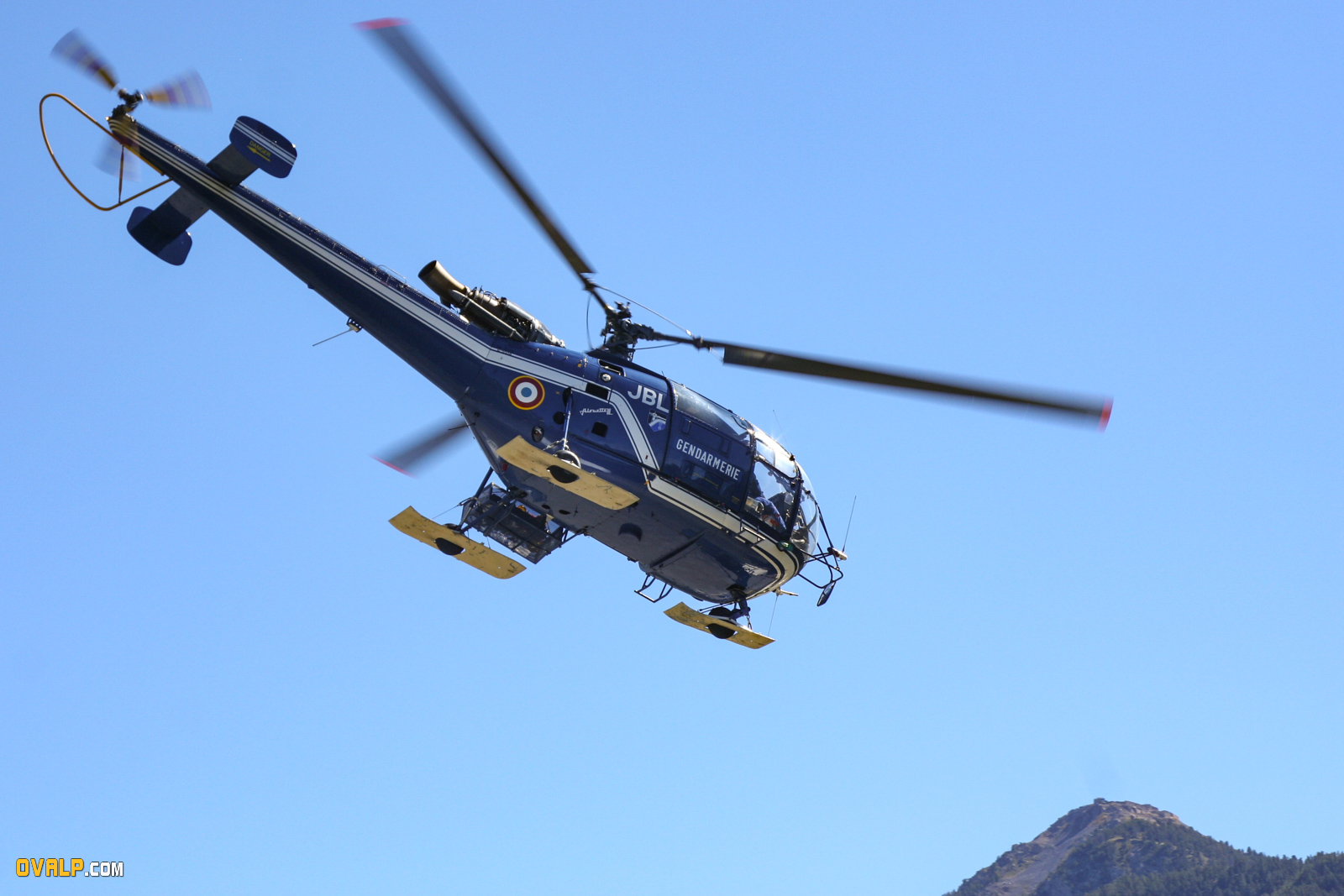 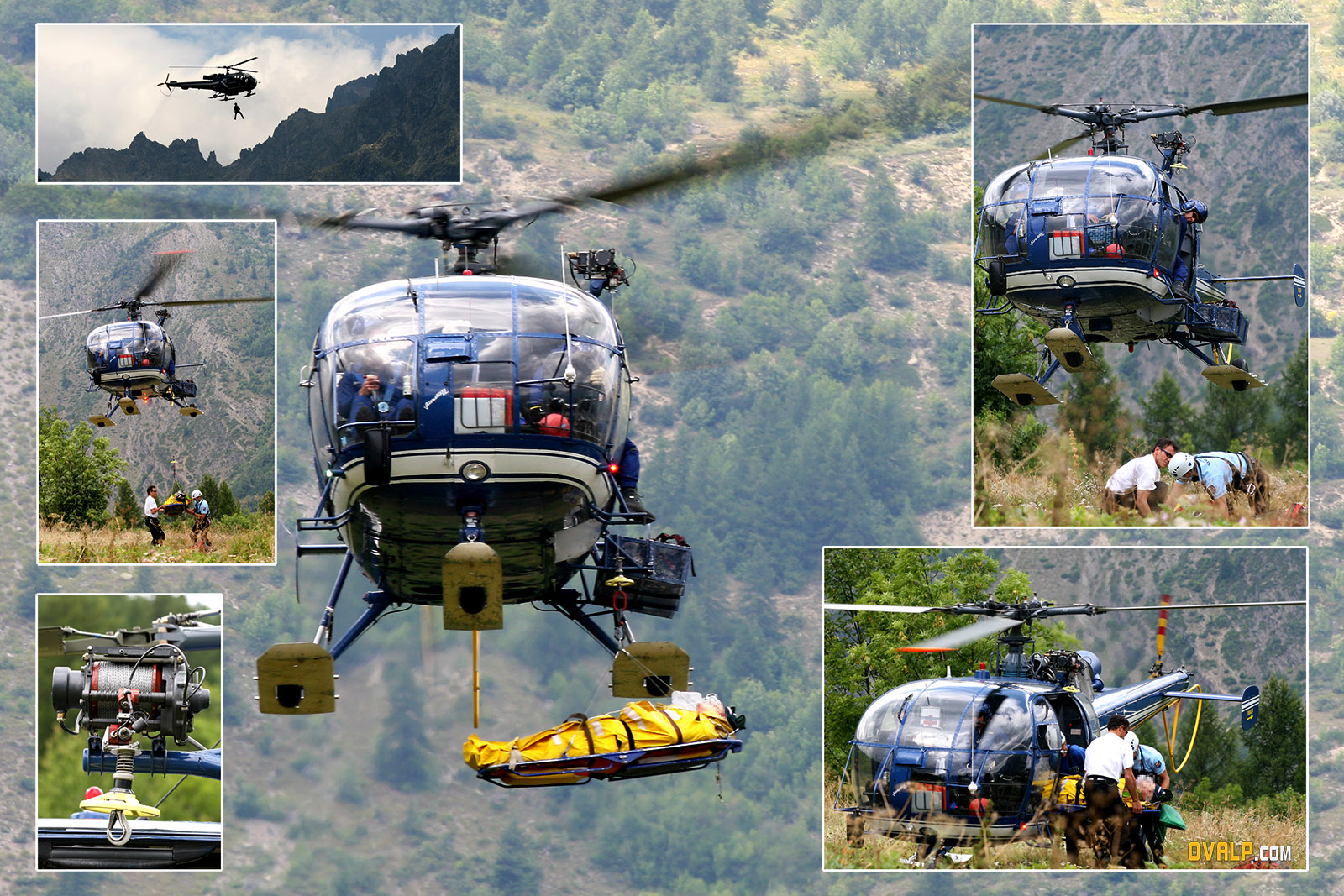 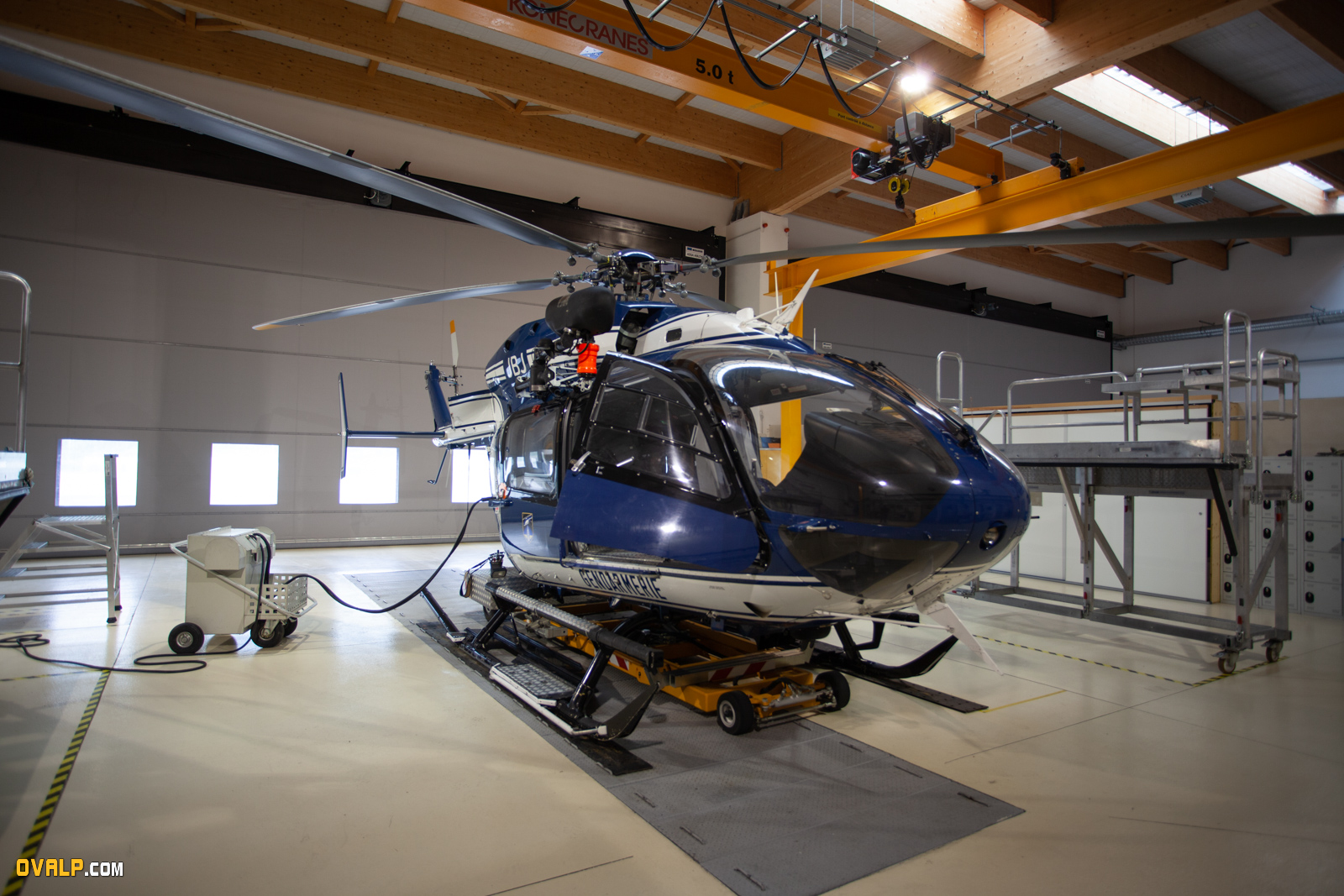 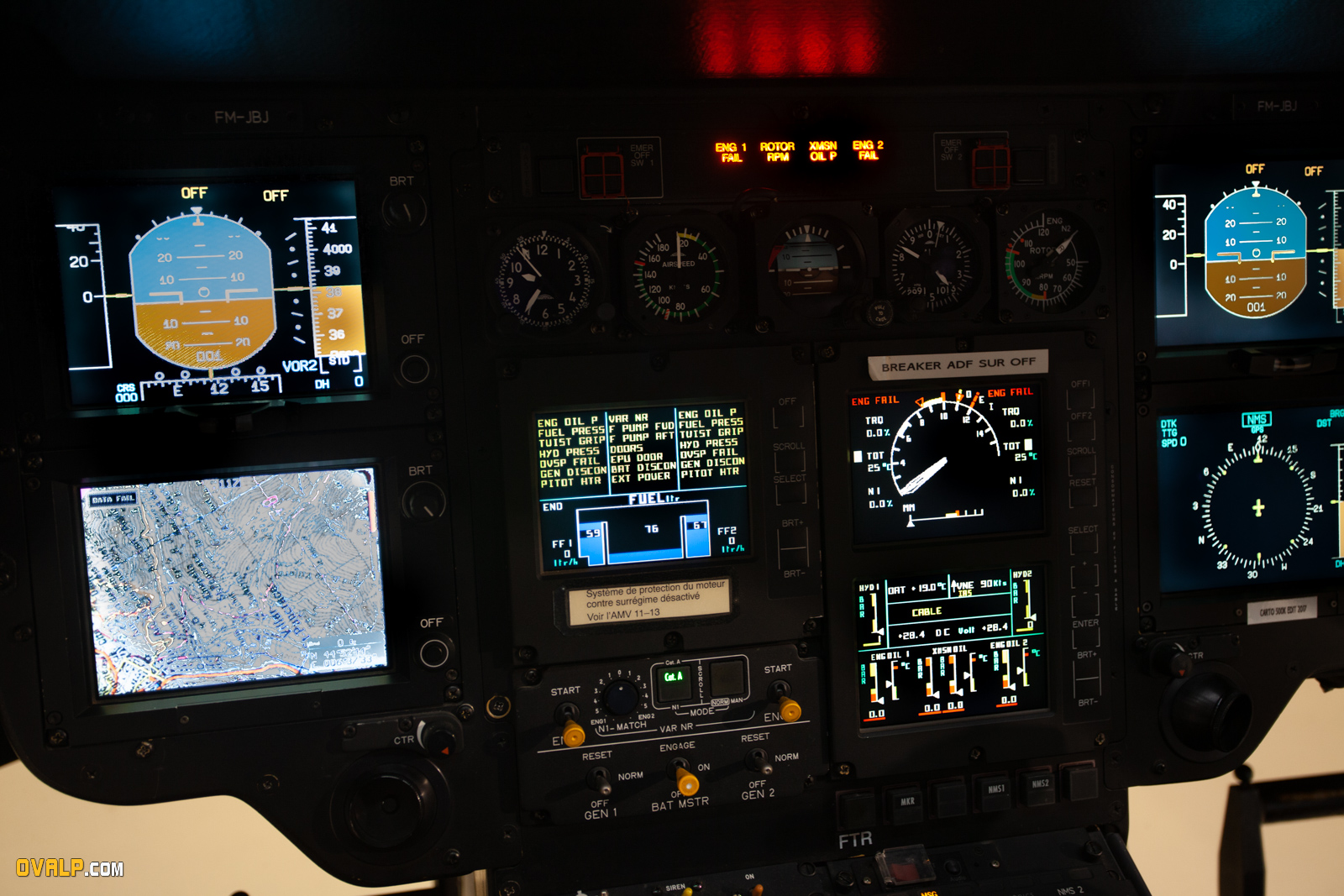 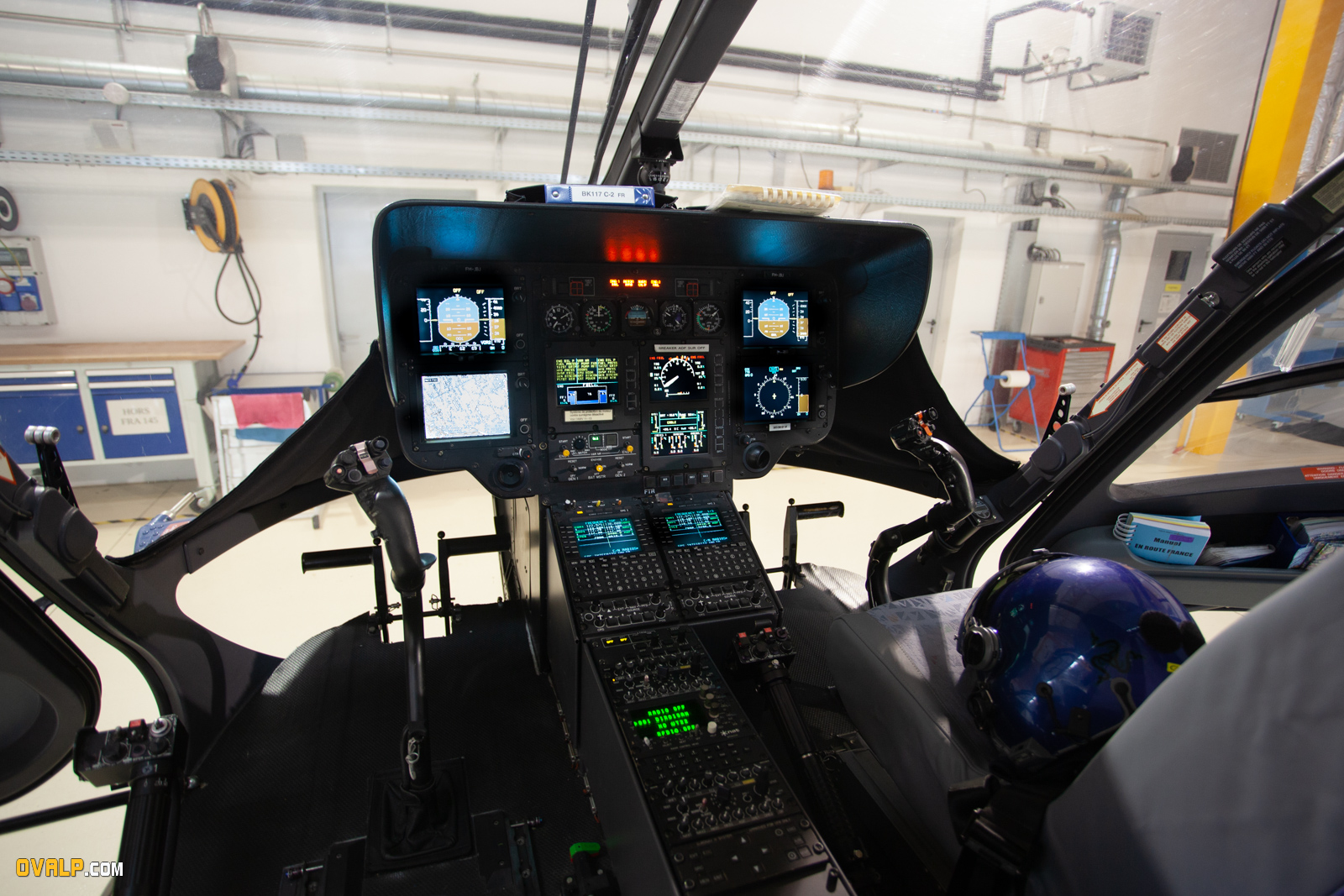 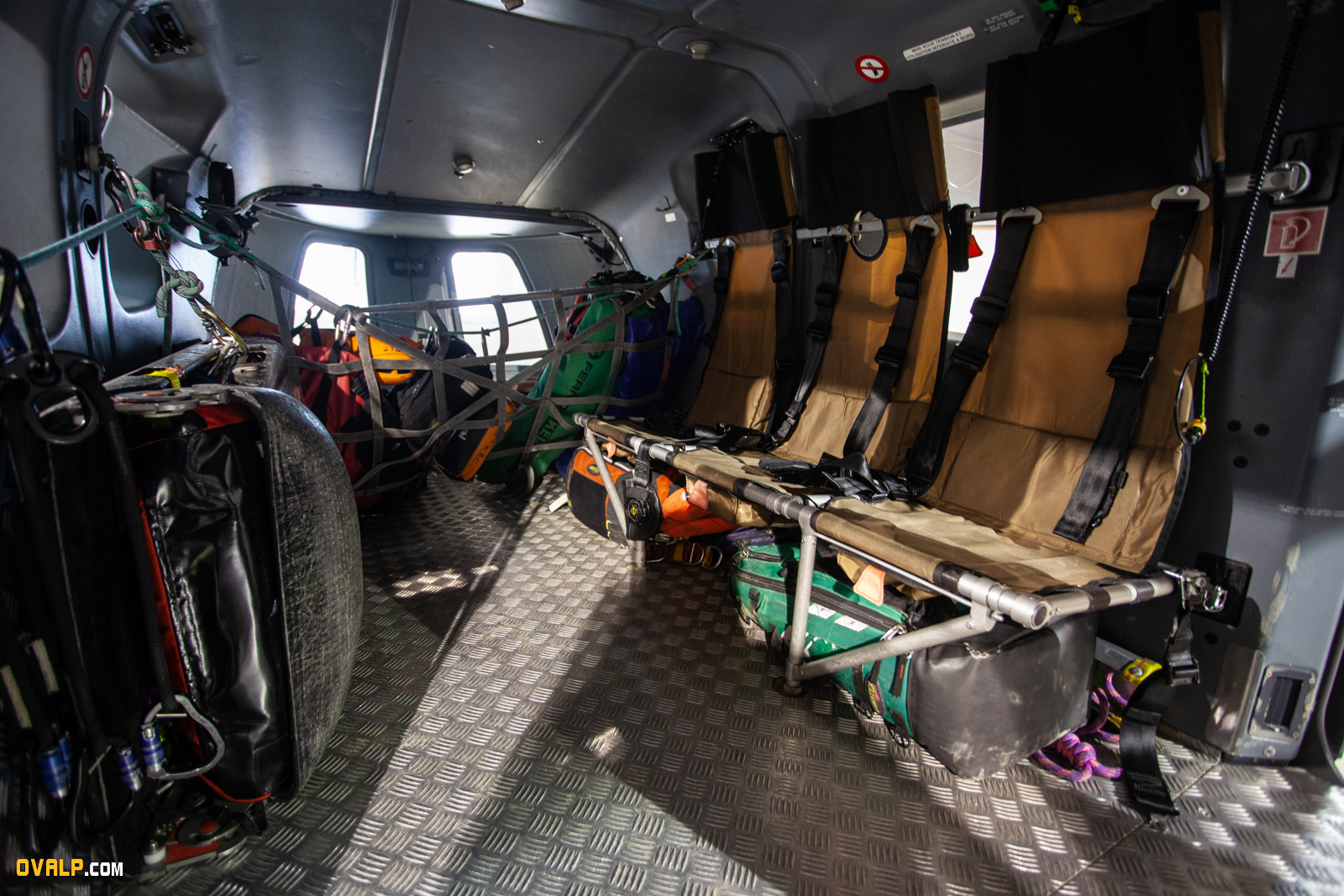 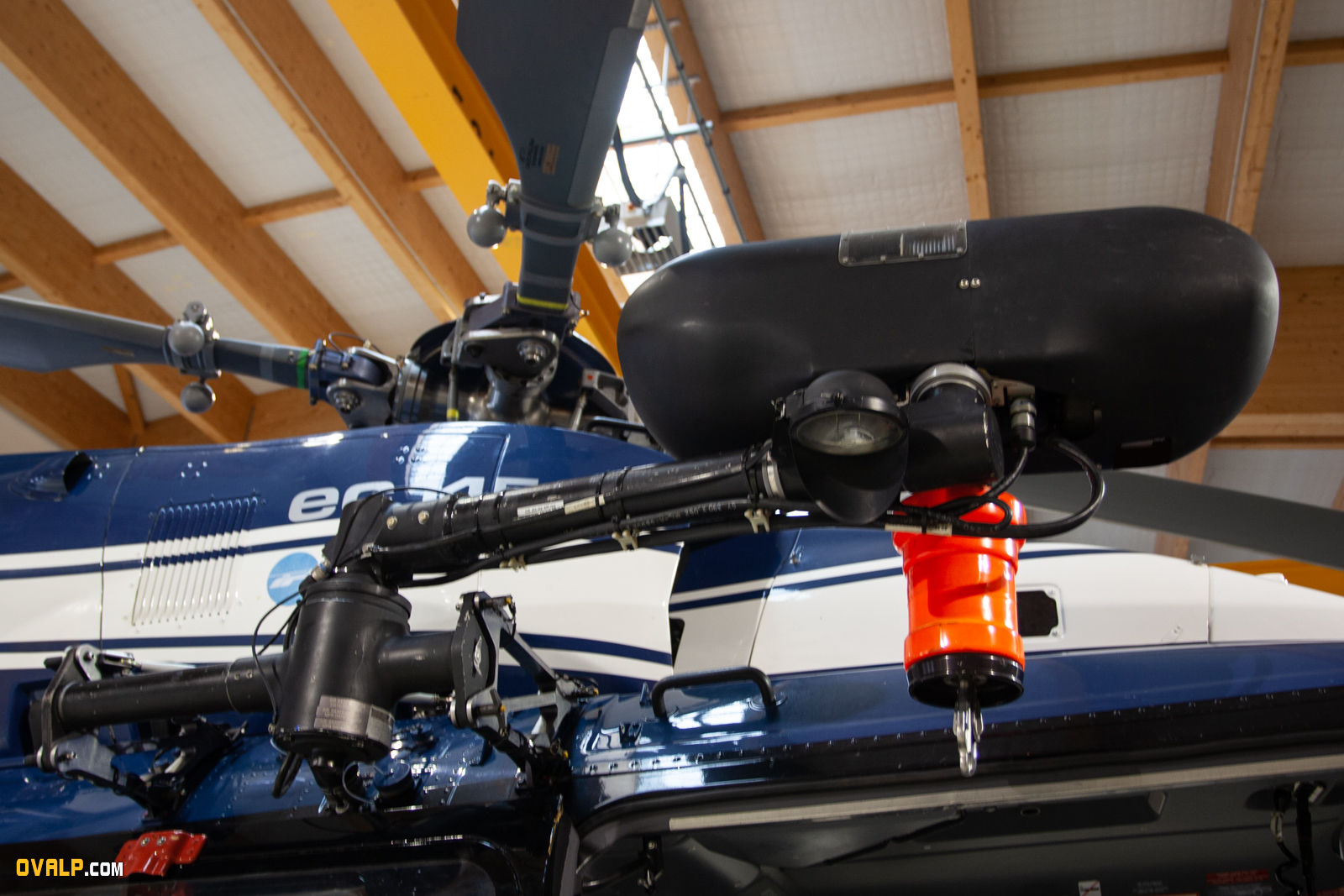 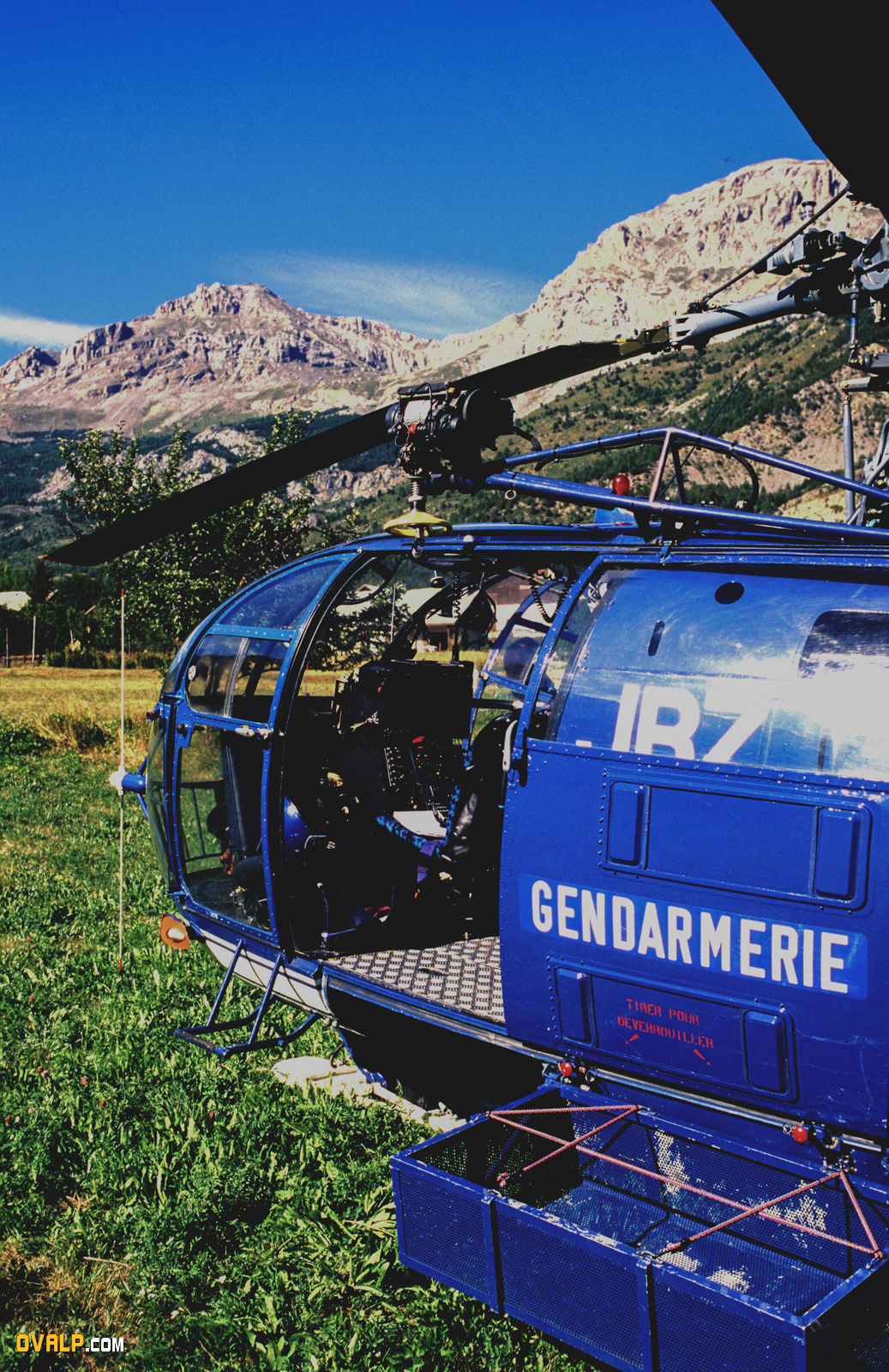 Video of an air rescue demonstration in Briançon (French Alps)

The Briançon (Frenhc Alps) PGHM and CRS in the air by "Choucas 05" the EC 145 of the Villard Saint Pancrace DAG during an air rescue demo at the world climbing 2018.