Following the exciting reading of "Sapiens", we were eager to read "Homo Deus". After describing in Sapiens "a brief history of humanity" the author begins to imagine at the time of robots and computing growing "a brief history of the future". Will Sapiens survive the incredible revolutions in progress?

The vision of the future by Yuval Noah Harari 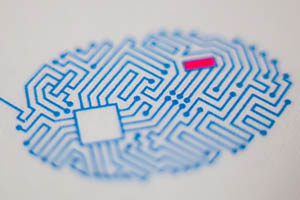 The author explains to us that the three greatest scourges of humanity (famines, epidemics and wars) hardly exist anymore.
The future goals for humans will quickly be to repel death, achieve complete happiness, kind of nirvana, and take full control over its environment (Homo Deus). 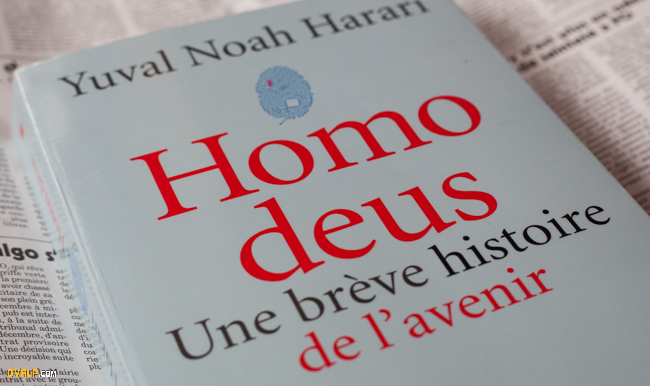 The author insists very much in "Homo Deus" on the very recent character of the humanist ideology, about three centuries. She believes in a free, sacred and central man; often, according to the author, at the cost of environmental and animal destruction.
Harari describes the thesis of the human being, fruit of an assembly of organic algorithms, results of a Darwinian evolution of a few million years. Sapiens is actually an assembly of about 37 billion cells and a real ecosystem where live, for example as many bacteria ...
Our behaviors and thoughts obey only a program (algorithm) and rules being made bare thanks to the capacities of computer processing of quantities of data (biometric, medical, behavioral, social, psychological etc.) .
Sapiens ending quickly, in a few decades, one or two centuries at most, by not being used for nothing because much less powerful than the self-evolving algorithms of computer processors.

The author insists that it is scientifically proven that we have no free will but that, on the contrary, our decisions are the result of "simple" deterministic or random biochemical processes. 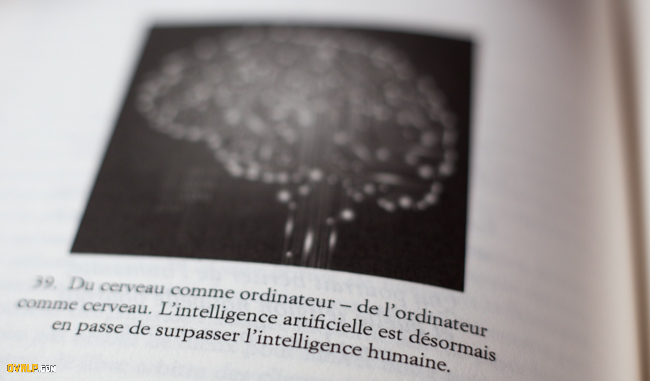 In addition to the manual and repetitive tasks already accomplished by machines, many professions (doctors, lawyers, police investigators, meteorologists etc ...) will inevitably be, often and largely replaced by more efficient, faster and more efficient algorithms. especially less expensive. This transformation is already very much in progress without most of us realizing it.
Algorithms are nowadays able to make art (for example music) without man being able to detect if the creator is a human or an artificial intelligence.
The author pushes provocation by stating that Google should vote for us because he knows us better than ourselves and is not a victim of our affect (eg emotional impact of last-minute news, temperature, etc.). ..on the electoral results).

Our impressions about« Homo Deus » 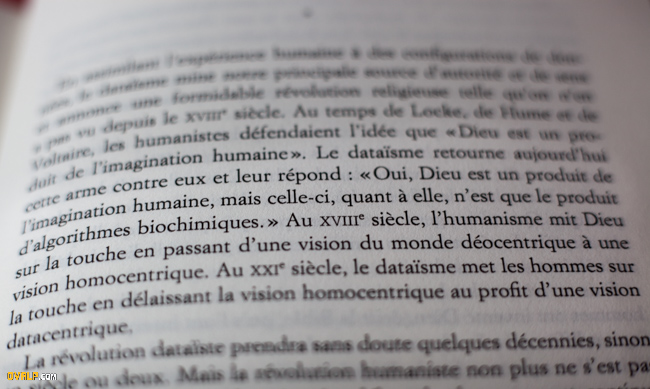 The book disappointed us on several points. The first is that the brief history of the future seems to arrive at the end of 300 pages out of a total of 430. The author repeating during the first 300 pages the history of the evolution of Sapiens, a repetition certainly rich , refined, from the book "Sapiens". This long first part (3/4 of the book!) Doing duplicate with the previous book. This indispensable perspective of the future with the help of the past "consuming" too much space in the end.
Many and too long digressions (ecology, animal cause etc ...) serve the purpose and the subject.
In the end even if the subject is exciting and brilliantly treated it seems to us that the author could have better structured his work, be more didactic. "Homos Deus" gives us the impression of a book too quickly written, to surf on the enormous commercial success that was Sapiens as well as on the topicality of the subjects of artificial intelligence, big datas, cyborgs etc. ..

In the end should we take the time to read Homo Deus?