The French Riviera has attracted the world for over a century. A holiday resort for the European nobility, then the bourgeoisie and finally the largest number, it is a magnificent space, inevitably, heavily occupied by human constructions in its coastal zone. Aerial photos often allow a better understanding of what is happening between Cannes and Menton via Nice and Monaco ...

Better understand the Côte d'Azur and its coastal area in the Alpes-Maritimes with some aerial photos. 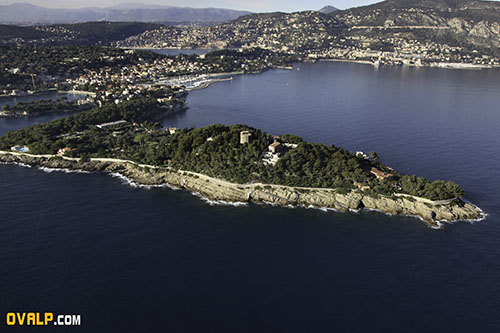 The aerial photos show us a density of land use all the more important as one gets closer to the big blue. Communes often exist dichotomously: an ancient village, perched and protected by fortifications used to protect themselves from attacks from the sea and a more recent part by the sea on the shore.
Many second home type homes for the wealthy; pavilions lined up next to each other, each with its pool. Many golf courses are there to allow older, baby boomer generation to enjoy their pensions ... pay-as-you-go.

The transport infrastructures trace their lines in the form of strips of bitumen, motorway interchanges, tolls, airport built on the sea, like that of Nice. The valley of the Var, east of Nice, opens the door to the wilder hinterland, a true ecological lung. The reliefs largely benefit from the distribution of the wealth of the coastal strip through particularly structural equipment.

From Nice, capital of the Riviera, to Menton, the relief is accentuated and the name of Alpes-Maritimes is here even better.
Monaco, a country in its own right, is characterized by its dynamism and its resolutely international orientation. From the sky the principality seems cramped and gives wings to push upwards through buildings that are reminiscent of New York or even Hong Kong.
Menton, border town, seaside keeps a quaint and colorful stamp, no gloomy word games.
The coastline from Menton to Cannes is home to luxury habitats often reserved for a very wealthy clientele as is the case in Cap Martin, Cape D'Ail, St. Jean Cap Ferrat, Mount Boron, Cap D'Antibes etc. ..Russian, Chinese, American, English, millionaires and billionaires populate the places driving beautiful cars, often accompanied by no less beautiful young women. It is factually more rare to see the opposite situation.
Villages and towns on the edge of the river, such as Villefranche sur Mer, Antibes or Beaulieu, offer all the attractions of La Dolce Vita, as well as the pleasures of the sea and boating.

The Bay of Angels at the bottom of which Nice snuggles does not usurp its name at least to consider the attraction it arouses on all kinds of visitors, often more varied than each other from prehistory to the present day (Russian, English, Arabic, Asian etc ...).

The islands south of Cannes are fortunate to be preserved from all recent constructions but not an inevitable summer tourist influx.

The city and its facilities are everywhere but all these urban areas have a lot of gardens and a very often lush vegetation. In addition it is only a few minutes of travel to find yourself in the wilderness either south to sea, on or underwater, but also north or the hinterland.
For example between Grasse and the Var valley with the different Bayous, which will allow you to contemplate the Mediterranean shores seen from above.

By escaping a little more inland, the mountains will "aerate" especially summer during hot weather. You can also, this time winter, skiing at Cheiron, top of the ski resort of Gréoliere, where it is possible to ski at the foot, to see the sea and sometimes, very distinctly Corsica seen from the mainland. The ski resorts Isola 2000, Auron or Valberg but also the sublime wild and protected area of ​​the Mercantour National Park will end up giving you a whirlwind of coastal life, for a few days ...

Do not hesitate to visit my photographer website in Nice, Monaco and more widely on all the French Riviera to have an overview of my services, as well for individuals (weddings, family events etc ...), business (congress, seminars, etc.).

French Riviera photos from the sky

Please wait 2 or 3 minutes for downloading the 82 photos below.

Slideshow of the Cote d'Azur seen from the sky

Please wait 2 to 3 minutes for downloading the 82 photos below.