A beautiful walk in the Vercors to the summit of Grand Veymont at 2341 meters above sea level allowed us to observe and photograph many ibexes. We also offer a panoramic 360 ° photo from the summit of the Grand Veymont with a glimpse of Mont Blanc 150 km away but also views of the peaks of the Ecrins massif, more easily recognizable (Barre des Ecrins, Meije etc. ...).

The hike in the Vercors Regional Park can be done from the Vercors plateau from the Saint-Agan-en-Vercors sector (about 1000 m altitude difference), so mainly on the west side or from Gresse-en Vercors, mostly opposite is at least up to the collar called "Pas de la Ville".

A plaque (visible on this page in the photo gallery) honors the memories of Paul Robert and Edmond Perrin killed "by the enemy" (militia or Nazis?), July 23, 1944. The Vercors was a hotbed of resistance to Nazi fascism. A memorial museum very well done awaits you in Vassieux and is worth a visit.

The ascent to the summit, very busy in the summer period will probably give you the chance to see the ibex Vercors, species reintegrated by men from the Italian Gran Paradiso reserve, refuge of the species in near extinction in the 19th century. Many colonies dot the French reliefs, for example in the Cerces massif in the Hautes Alpes. Hautes Alpes (France) that can be seen from the summit of Grand Veymont.

The summit of Grand Veymont allows a 360 degree view. We offer a virtual tour from the top (zoom and full page possible)

Some points, places and peaks visible from the summit

The Massif des Ecrins points east, overlooked by the Bar des Ecrins or the peaks of the Meije, about 70 km distant.Bouquetin Grand Veymont 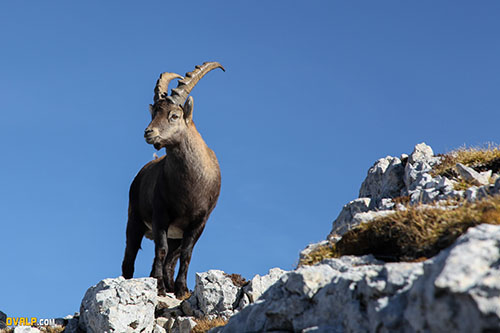 Mont Blanc stands out, barely visible, on the horizon in the background, about 150 kilometers to the northeast. The invisible central mass on the day of this hike is apparently observable by north wind.

Grenoble, a stone's throw to the north, capital of the Alps, releases its industrial pollution especially the days of thermal inversion, veritable cap trapping fine particles. One of the panoramic images below clearly shows this screed but in the sector of the Rhone valley towards Lyon ...

A sense of freedom, surrounded by wild animals, overlooking the foothills of the Alps will not fail to capture you from the summit as long as the light and weather conditions are there. Large, sluggish (male) goats, more or less solitary, (females), eels (young females) and eterlous (young males) often dot the way to the top, feeding the memory card of your overheated camera, to not to say excited, by such an encounter.