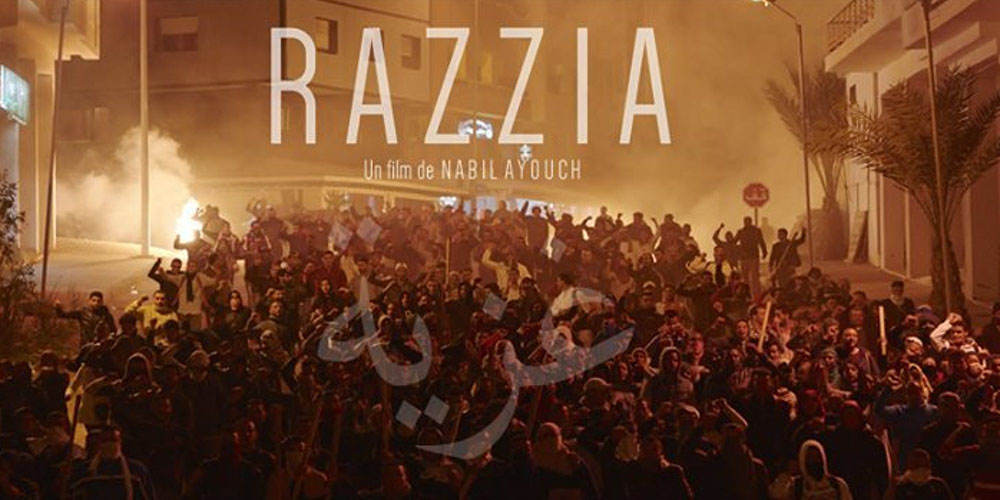 The scenario of Nabil Ayouch and Maryam Touzani

Razzia is a film about the life of five characters who have almost nothing to do with each other. A tug between desires for freedom and the constant pressure of traditionalism and fundamentalism.

Many close-ups come to underline the power and the imbroglio of the feelings felt by the characters. Images made at the shoulder further increase the tension in the film. The lighting and photography are beautifully made. Some shots, made with effects of shallow depth of field and bokeh https://en.wikipedia.org/wiki/Bokeh. , "Aestheticize", Americanize the film ... Some images in the High Atlas made from drones give the impression of overflowing the situation, to take a step back.
The actors interpret their role beautifully. We think, among other things, Abdelilah Rachid's singing a cappella, the young "hitchhiker" or the old lady with the cigarette ... The spectator, aware of the environment, can only be admiring face to so much commitment, courage. We imagine the risks, concrete, physical, family that take both the actors and the various stakeholders of the film.

Traditions and retreat or big dive in the global village

The Kingdom of Morocco, a great country, open both to Europe by the Strait of Gibraltar and its Mediterranean facade but also to the rest of the world with its Atlantic coast, punctuated by the city of Casablanca, or to Africa and the Caribbean. Sahel across its southern border seems to be strong enough, so that some of its children are able to shoot this kind of film, on the spot. The production being Franco-Belgian, unless I am mistaken.
A pitfall would be to see this film as an alert on the risks of shipwreck, of tipping into fundamentalism, of Moroccan society. It is also possible, positively to see a lot of hope, courage of a whole section of the population, youth and women in particular.

The bodies, the freedom to be oneself, to think and to express oneself are confronted with the diktat of the society, the entourages. An inevitable schizophrenia takes hold of many, a big gap between a certain past and the vertiginous acceleration of history, and not only in the land of Islam.

One can not help but think of Yuval Noha Harari's book "Sapiens, a brief history of humanity" and the part concerning the historical tendency to "the unification of cultures" (scientific revolution, communications, displacement) and the resistance it provokes. This fear, regressive some say, to be swallowed by "the village and the global culture," as the saying goes.
A politician, candidate for the presidency of a leading French political party (Laurent Wauquiez in this case) expressed it in one sentence, on October 25, 2017: "... I prefer this old moving country to the sad global village that is only the dehumanized showcase of a world without roots that does not stop wanting to make us connected citizens of a globalized utopia ... ".
What the political editorialist Alain Duhamel, known center-right, commented a few days later in three words: "cynical, opportunistic and effective".

This battle is not only Moroccan or Maghreb, as it could arrange some. The relationship to sex, difficult in the Maghreb, read about it Mohamed Choukri, Tahar Ben Jelloun or Leyla Slimani, is not "neutral" or serene, in the West either, as attested by the numerous cases of pedophilia in the world. Catholic church or sexual harassment problems, fortunately more and more often put in lights .
The desire for withdrawal is in fact widely shared in every corner of the world, Razzia bravely highlights this subject even if the situation of women and minorities is not, of course, everywhere comparable.
Is French society capable of "self-analysis" with as much foresight? The fundamentalisms and populisms varied in France are not as powerful as in Maghreb but they develop with great speed V. One can not, of course, not compare the hold of the catholic fundamentalists of the type Common sense and others to the influence Moroccan fundamentalists.

Morocco is of course not limited to this tension, the country is experiencing economic development that has allowed large sections of society to live better and access to education. The royalty has managed to contain the extremist pushes, for many, many years, better than in the rest of the Maghreb ...

The film takes us into slices of hectic life. No length, probably because it features fiery, young, combative, sometimes excessive and violent individuals that nothing seems to want to stop.

A great film on the way to the Oscars

This film conquered us by its strength, its courage and its cinematographic quality. The film is Hollywood in a certain way: sex, violence, suspense, photography and plans, effective screenplay, etc ... but it is also a fight film for a freer, more open, more tolerant society . A cinema determined not to let obscurantism advance for an inch. We are sure he will be very successful, perhaps at the Oscars, because he was chosen to compete for the 2018 Oscars preselection in the "Best Foreign Film" section.