Move and park in the city center of Turin by car 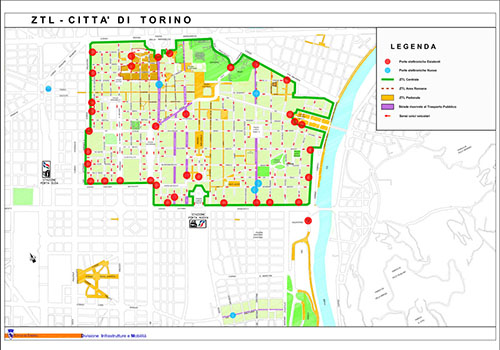 A very unpleasant feeling seized more and more tourists, including the Hautes Alpes, going to Turin. Several months after their visit, sometimes until almost a year later. Motorists are fined for "access in pedestrian zone or restricted traffic area without the necessary authorization". Hundreds of messages dot social networks and internet forums about it.
These areas of downtown, in Turin but also in Rome, Milan, Florence, Pisa, Bologna or Naples seem reserved for the owners of a vehicle registered in the city. An electronic system is in charge of imposing the contravention. This is usually 50 euros to which are added 50 euros file and postal charges for France, which ultimately amounts to more than 100 euros.
Even if it is admitted, understandable to put in place rules of circulation, and, why not, to limit the accesses to the city centers to the cars, some questions arise:

We have written to the Tourist Office of Turin to obtain information about this regulation ... unanswered to date despite an acknowledgment of receipt of our email. Note that this contrasts with the professionalism usually found at the tourist office of Turin, on site or online ...