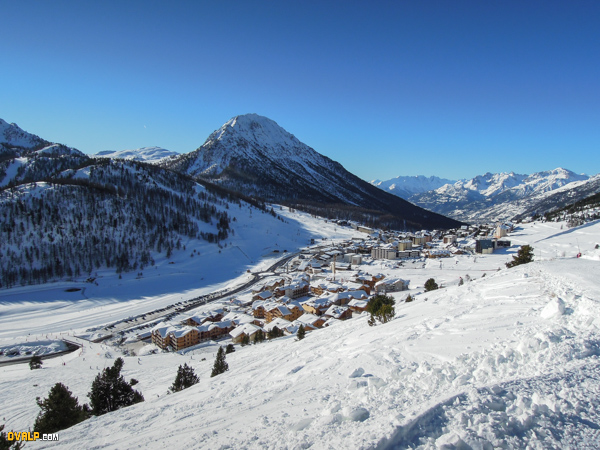 The station is located on the Franco-Italian border and thus benefits all potential customers of the Turin basin. The Piedmontese capital is an hour away. Montgenèvre was the scene of the first official ski competition in 1907 and claims to be the oldest ski resort. The place also has other historical specificities with for example the passage of Napoleon Bonaparte for the inauguration of an obelisk in 1804. The station is easily reached by road through the motorway (Chambéry A43 - Turin T4) through the Frejus tunnel. Paris is only 4h30 by TGV direct line, 20 minutes by bus can then arrive at the foot of the slopes. The journey from European capitals takes little more time thanks to the proximity of the international Turin airport Caselle.

The ski slopes are located on either side of the pass of the same name as the resort. The trails on the north side (Chalvet sector) are facing south and those south of the pass (Gondrans sector and Eagle) look north.
Depending on the time of year, it may be appropriate to ski according to the hours of the day on the south or north face as the sunlight changes the temperature of the snow and therefore the sensation of sliding. 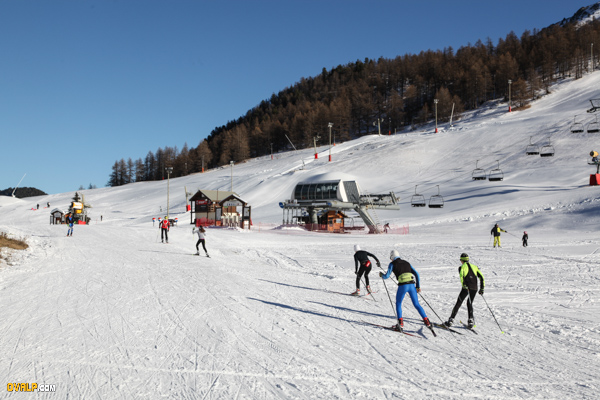 The "Grand Montgenèvre" package allows you to enjoy the Italian part called the Monts de la Lune area. The junction unfortunately can no longer be done at the top of the slopes for reasons that depend on the Italian part of the station.
The width and the low slopes (green and blue) of many tracks of Montgenèvre adapt well to the apprenticeship, particularly in the sector of Gondrans. There are some steeper black slopes (Fournéous, Réserve and Rhodos) for the more technical sled lovers. Several bottlenecks and bottoms of valleys can have fun on a kind of natural snow park tube (sector Pharo and Gondrans), see the immersive video 360 ° on this page at 3: 10/5: 24
The resort also offers several fun courses and snow parks.
A beautiful high point in the Gondrans sector will offer you an exceptional view towards the Ecrins mountain range.

The advantages of the resort 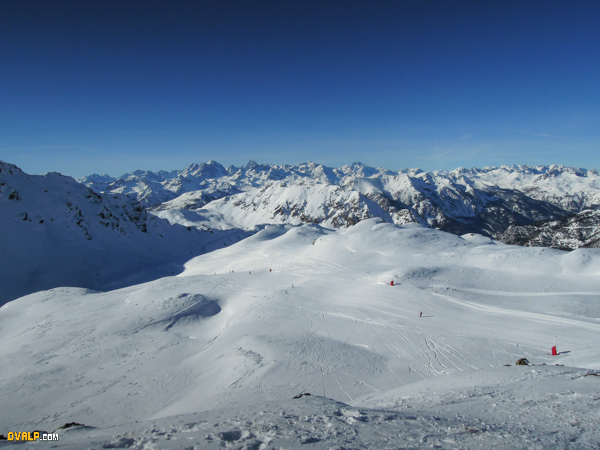 The resort has a snow very good quality thanks to its altitude. The foot of the slopes at the pass is located at more than 1800 meters of altitude to reach more than 2600 meters which gives a real competitive advantage to the station. A local phenomenon called the return of east, linked to a meteorological depression loaded with Mediterranean water, snow regularly and abundantly the sector. Over the years snowmakers (snow cannons) ensure the opening of the slopes without natural precipitation. Part of the Gondrans sector has recently benefited from these facilities.

A cosmopolitan and lively resort 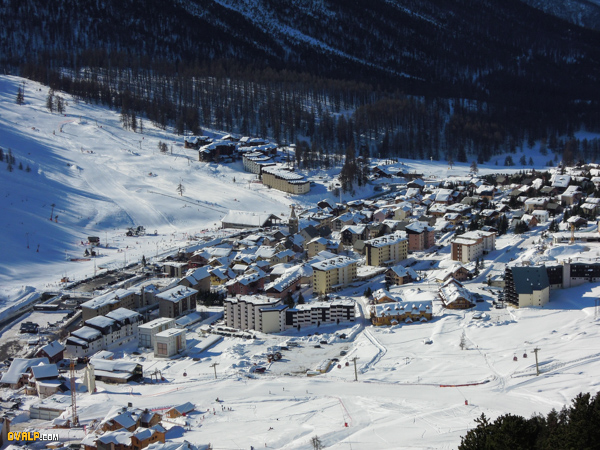 The immediate proximity of the border but also the Piedmont region opens the resort to a large Italian clientele pleasant to cross on the slopes. It is always a pleasure to exchange a few words or have a drink between two descents with our friends transalpine, always in a good mood. A funny quote and surely excessive Cocteau in passing: "the French are Italian moody" ... Many other European citizens frequent the place to the delight of local merchants.
The station, thanks to the friend Ronan, proposes a program of animations and festivities varied and of quality, throughout the periods of school holidays.

To enjoy the 360 ° feature, either use a recent computer or use most mobile phones or tablets using the YouTube app. It is then possible to move 360º in the video using your mouse or your fingers. Do not hesitate to choose in the YouTube HD settings especially if your internet connection is good because this video weighs more than 550 MB.
Links Youtube https://youtu.be/GQ7hiDUX5tk

Activities other than skiing

Diversification requires, Montgenèvre offers the balneotherapy center Durancia but also a sledge rail among the longest in Europe. This offers an alternative to all skiing especially the years with light snow, a sort of partial safety net for the resort. This also meets the expectations of holidaymakers less and less "monomaniac" and more and more keys to everything ....

Montgenèvre door open to the Milky Way - Via Lattea

A package for less than 50 euros in 2018 allows from Montgenèvre to connect the gigantic ski area of the "Milky Way" to the resorts of San Sicario, Sestriere and Sauze Oulx. The 2006 Olympic Winter Games were held on this Italian ski hill. Leaving for the day from France to the Italian slopes is like taking a trip on skis, a kind of touring on boards.

Panoramic photos of the ski area

The Chaberton summit at over 3100 meters above sea level overlooks the site. The resort aims to develop tracks and lifts to the summit in the coming years. The topography of places may make the task of the most difficult except perhaps on the northern edge of the summit ...
A junction to Val des Prés by ski lifts (village nestled at the bottom of the Clarée valley), maybe even Briançon and why not Serre Chevalier regularly feeds discussions and announcements in the local press. The project taking on the appearance of Arlésienne according to some inhabitants ...