Sonita, the revolt of a girl against a patriarchal society

Sonita, an apprentice rap artist, tries to escape certain customs in her homeland, where her family is determined to marry her by force, to get the money for her own brother to buy a wife in turn. Tradition today illegal in Afghanistan but still widespread, mainly in popular circles, and which in some way represents the value that a married, often much older, spouse gives to a young wife and her family.

The young girl, Sonita Alizadeh, steeped in dreams, culture and western music sparkles with life and does not intend to be left, nor the blackmail of her mother remained in the country (cynical, incapable and conservative), nor by the threats of his brothers.

Sonita's energy, her foolproof smile, in a way resembles that of the heroine of "Djam", a magnificent film by Toni Gatlif, also addressing the theme of exile between Greece and Turkey.

The suspense lasts almost to the end of the documentary: will Sonita end up free or submissive?

This documentary deals with the feminine condition, the obscurantism of certain patriarchal societies, without a taboo, far from a naive vision that some Westerners might have of distant and exotic countries often idealized.

The documentary "Sonita" reinforces the idea that "global society", globalized, even if it can present many faults (risk of cultural standardization for example), also allows thanks to its communication tools (internet) to advance human rights.

The Iranian filmmaker Rokhsareh Ghaem Maghami claims a cinema "reflector" where the camera but also the film crew does not hide, on the contrary, and inevitably admits to influence the course of events even involuntarily.

The film also gives us an interesting perspective on Iran, whose director is from, a country in full evolution thanks to her civil society. We see an Iran torn between progress and religious obscurantism, visibly finally ready to free itself from its medieval oppressors. Iran, whose censorship still very strong according to the filmmaker, nevertheless allowed the filming of the documentary in Tehran.

The documentary "Sonita" (co-produced in Germany, Switzerland and Iran) conveys hope and vitality. The film confirms and puts into perspective the importance of the marker of women's rights in the level of development of a society but also the time required and the importance of education to achieve it.

The documentary is available in VOD (see example of link below) but also to the loan in all good libraries, thank you to that of Briançon (France) in the Hautes-Alpes for recommending it. 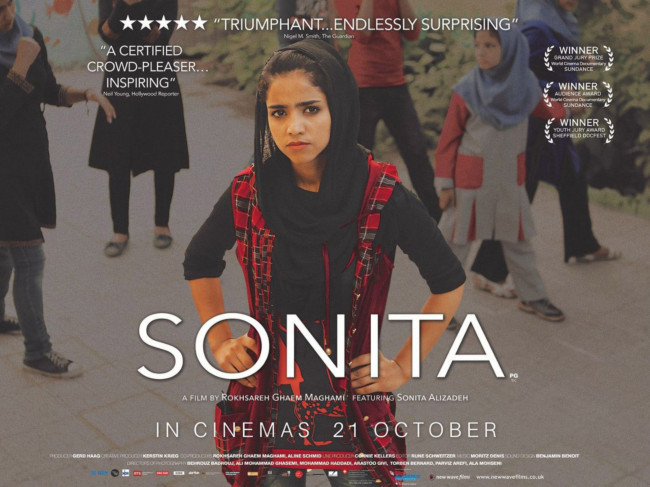